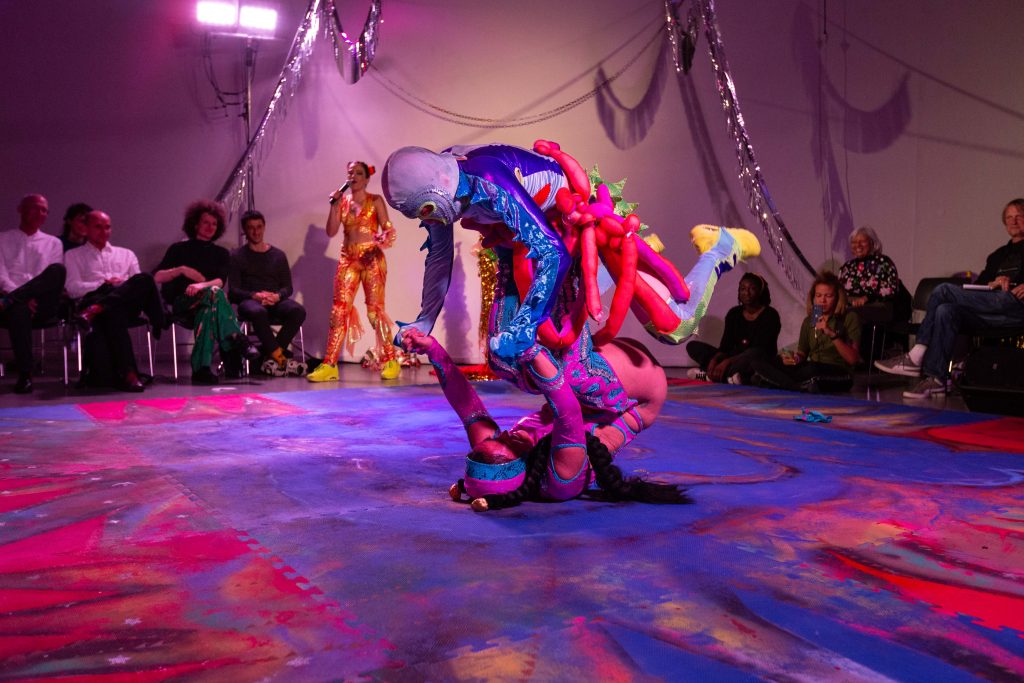 Join us on 14 September 2022 for the workshop INSTRUCTIONS FOR DESTRUCTION, the kick off event of The Goldfish Bleeding in a Sea of Sharks Wrestling Club!

Together with facilitators Anahi Saravia Herrera and Jemima Yong, we’ll look at the manifesto as a medium, read & think through examples together, and collectively write our own. Focusing on writing a manifesto for an anti-capitalist/ anti-neoliberal/ anti-racist and feminist art sector. These manifestos will feed back into the performances of The Goldfish Bleeding in a Sea of Sharks Wrestling Club as short texts to be read, digested, and actioned alongside the show.

The workshop is FREE and as an attendee, you will also receive a free ticket to the wrestling show and party on the 16th of September.

MANIFESTOS, MANIFESTOS, MANIFESTOS
Manifestos are seeded from a desire to make what feel like (im)possible, (un)reasonable, and necessary demands. They are simultaneously critical writing, performance, textual screams of frustration, instructions for destruction, and scores for the future.

Manifestos lay out political imaginaries and are not necessarily concerned with nuances – they do not always lay out a plan on how to get to where they want to go but advocate for getting there at any cost. They can be read as instructions, as scores that mark out how to get out of the situation we find ourselves in, and are also speculations on what there might be beyond. Manifestos are performative texts because they are used to create calls to action beyond the page.

ABOUT ANAHI & JEMIMA
Jemima Yong (she/they) and Anahi Saravia Herrera (she/her) make work that creatively interprets political situations and feelings. Between us, we hold experience as performers, curators, writers, and community organizers. Jemima and Anahi are interested in creatively reflecting on our felt experience of power structures as women, migrants, cultural workers + ambiguously young people. We gravitate towards creating work that involves the act of making things public and making the covert or insidious, explicit. We like to laugh when we do this, so humour is also important. We live & work in London (for now).

INSTRUCTIONS FOR DESTRUCTION is part of THE GOLDFISH BLEEDING IN A SEA OF SHARKS project by choreographer/artist Thais di Marco; a performance series where artists fight out of headlocks lucha libre style.

INSTRUCTIONS FOR DESTRUCTION is part of THE GOLDFISH BLEEDING IN A SEA OF SHARKS project by choreographer/artist Thais di Marco; a performance series where artists fight out of headlocks lucha libre style.