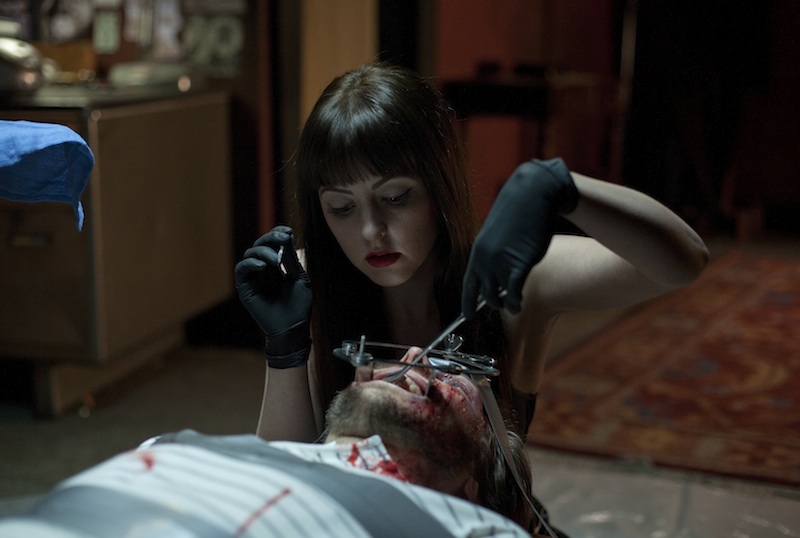 American Mary (2012) by the Soska Sisters
Strapped for cash while putting herself through medical school, student Mary Mason (Katharine Isabelle) takes a job as a waitress at a strip bar run by Billy Barker (Antonio Cupo). As she becomes increasingly disillusioned with her studies, Billy introduces Mary to a new and extremely lucrative sideline, performing extreme body modifications to an odd collection of flesh-obsessed characters. Subsequently forced to drop out of medical school, she soon takes refuge in her new career. But as her demeanor steadily darkens, and her actions take on an altogether more vengeful twist, she begins to be known and feared as ‘Bloody Mary’.

Twinpool (2018) by the Soska Sisters
Jen and Sylvia Soska, the fan favorite filmmakers behind Dead Hooker in a Trunk, American Mary, and See No Evil 2, are back with Twinpool, a new short that puts both sisters in the role of their favorite comic book hero: Batman, of course! Wait. No. I fucked that up, didn’t I.

Tank Girl (1995) by Rachel Talalay
A girl is among the few survivors of a dystopian Earth. Riding a war tank, she fights against the tyranny of a mega-corporation that dominates the remaining potable water supply of the planet.

Welcome II the Terrordome (1995) by Ngozi Onwurah
With its title co-opted from a fierce track by New York rappers Public Enemy, Ngozi Onwurah’s sole feature to date is a rough diamond of 1990s British cinema, a harrowing blast of grungy exploitation. It begins with a haunting prologue set in North Carolina in 1652, where an Ibo family calmly drown themselves rather than succumb to the chains of slavery. It then jumps forward to immerse the viewer in a fetid slum of the near-future – the titular Terrordome – where drugs, crime and racism are as rife as the brutality visited upon the majority black inhabitants by the police.

The first film directed by a black British woman to receive a UK theatrical release, this low-budget yet visually imaginative work was widely derided at the time, but it should be commended for its eyebrow-scorching passion. Moreover, it forges surprising links between near-mythical pasts and imagined futures to provoke prickly questions about contemporary race relations, police brutality and the limits of ‘progress’.

I am not a Robot by Gabriela Richter Lamas