Yannick Verhoeven is well known for his work in the rumbustious Cairo Liberation Front, the much-missed Incubate Festival and the Eurabia club nights. More recently he’s been recording under the name Ramses3000. His debut album, Ataraxia (a Greek word which roughly translates as “a state of freedom from emotional disturbance and anxiety”), is a splendid smorgasbord of electronic styles and beats and really worth your time. It also features the work he did with Sierra Leone rapper Mash P, in WORM’s and his own studios.

How did your new release all come about?

I’ve been playing music under my solo moniker Ramses3000 for four years now. And through playing sets at clubs and festivals, the music I’ve been digging inspired me to produce my own music again. For my debut I didn’t want to think anything through or work too conceptually. I just thought, what if I get behind my DAW and grab some synths; what kind of music I would make? Because of the DJ sets I was playing, it felt natural to create tunes that would follow my tastes, so Ataraxia is really percussion based. After I visited Sierra Leone last year I kinda knew where things were heading and with the guidance from Raynor De Groot, who’s releasing music as Coloray and running the Intercept record label, I’ve put together a debut record.

You’ve always looked outside of NL for inspiration; why do you think that is?

Not to downplay the scene in the Netherlands, as there are a lot of great producers, DJs, bands and artists around here, but on a bigger scale I hate it that a lot of media and journalists are only focusing on the Anglo Saxon culture, and aren’t looking beyond the Western borders. Currently most new music styles are in my opinion emerging outside of the Western world, cause of the combination of electronic music and traditional music from their own heritage. For me it started seven years ago with the electro-cha3bi movement in Egypt. Later on I discovered that simultaneously these developments causing new exciting music in so many different countries in the Middle East, Africa en South-America. At the same I think it’s important to give a voice to artists from those areas as I think it gives an insight into a different culture, which most people aren’t aware of. Remember that digging into new music in these kinds of countries wouldn’t be possible twenty years ago; because of the Internet everything is available for everyone.

As I found that Mash P came to Rotterdam for a show at a special YCreate x Pantropical night we connected via the YCreate platform and they explained to me that he would be in town for a couple of days. I knew it would be a little difficult to invite him to my own studio in Tilburg and I knew WORM had a studio, which I wanted to experience for a long time; so that’s when I sent out a request of working together.

I’ve often been to WORM and I think this place is really an exception in the Netherlands; I don’t know any place like this. I’ve seen a lot of great shows, both DJs and bands, and I admire the vibe which is in the place. For me places like WORM should be cherished in the Netherlands; it gives artists, including myself, a platform and it helps us get inspired; think I’ve spent my whole weekend making beats after I visited the Pantropical night with Siete Catorce and Lechuga Zafiro for instance. 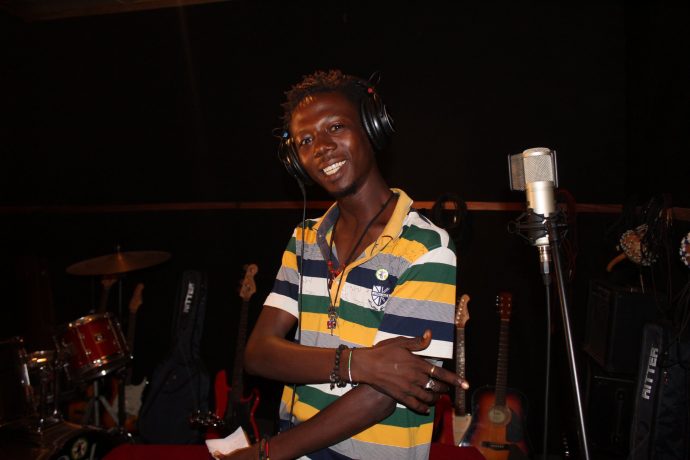 Mash-P is an interesting guy, can you tell us about your work together?

When Mash P came to Rotterdam it was actually the first time we met. We had a chance to hang out and became friends. Also in the studio, where we connected really well. I think he’s a really talented guy, who works really fast and is always eager to try out new things, which I always admire while working with artists. It’s amazing how he’s able to jump onto a more club-oriented track, as well as working on a love song or spit out bars about political matters, which is rare; not a lot of artists are this versatile. After we worked together in WORM he invited me to his home country, Sierra Leone, and introduced me to so many great artists from the capital, Freetown. In Freetown we worked together at the Way Out studios; an amazing place, which is run by a group of dedicated people, who give talented people from Sierra Leone a possibility to explore and develop their skills. Not only do they focus on writing, singing and producing music, they also give guidance for making documentaries, giving poetry classes and helping people with their Adobe-skills.

Next week I’ll release my debut record as Ramses3000 at Intercept. A couple of those tracks I’ve recorded last year in Freetown, Sierra-Leone. Thanks to Prince Claus Fund WAYout (Worldwide Arts For Youth), Mash P, Raynor de Groot & Pascal Terstappen this would not have been possible ❤️