RE#SISTER artist in residence in October

From 11 to 20 October, an amazing cellist/composer/singer from Guatemala will reside at WORM: Mabe Fratti. She is a rising star internationally, so we are proud to be the first place for her to land when arriving in The Netherlands, before embarking on a tour in Europe. Apart from exploring the Sound Studio, she will also collaborate with RE#SISTER members to collectively create new music. This will be presented on 17 October, under the title: Strings and Attachments. 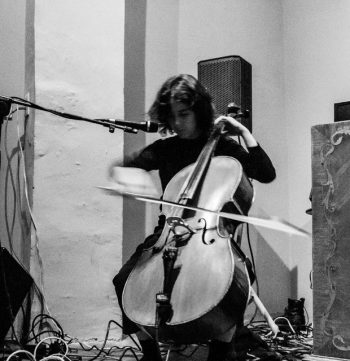 W:   I was wondering if you grew up in an environment where becoming a musician was encouraged, or was that an unusual choice in your family / milieu?

M:  None of my parents are musicians or artists. They’re both engineers, very scientific people and no one before our generation started something related to arts. So far, I’m the only musician in my close family. However, my mother encouraged education overall. She saw my enthusiasm towards music and nourished it. She never thought this was going to be a career choice though.

W:  Were there any people making music that you looked up to as a kid? If yes, in what way did they inspire you?

M:  My cello teacher. He has a special personality. Even though he is more traditional towards the “classical instruments” usage, he was always reminding me the importance of discipline, curiosity and the importance of exploring myself through music.

W:  What does the cello mean to you, as distinguished from any other instrument?

M:  It’s an instrument that has accompanied me for a long time in my life. It has become an extension for my expressivity and it still holds many mysteries from my perspective.
It’s an instrument with a melancholic timbre, and as that fun fact says, it resembles the frequencies of the human voice!

W:  Could you say a few things about the scene for experimental music in Guatemala? What networks are there?

M:  The infrastructure in Guatemala is very complicated and divided in some ways. Say, the architecture of the city is closed and pretty much private. Public institutions that would encourage artistic experimentation are scarce. However, small and ephemeral spaces emerge from time to time and there are some that still exist. For me the idea of space is very important so there’s a place where communities can meet and explore. And this is something that sometimes happens in art galleries in Guatemala such as Solemne, ERRE, RIÑA or Semana de Música Avanzada (SMA), or some foreign institution such as the Centro Cultural de España or local ones that are immensely beautiful such as El Centro Cultural Miguel Ángel Asturias. But to keep self-managed private spaces is very difficult: either money wise or even bureaucratically and public spaces are not well taken care of, due to problems of administration and corruption. Still, every new generation pushes more and more towards the existence of more spaces and gathers more and more community.

W:  When composing your music, what comes first, the lyrics or the music itself? Did you ever publish texts or poems in print or on-line?

M:  The music! The sounds come first, and afterwards I start to think of words. Words are composed of rhythm, accents, melody.
I used to write a blog, but it’s very old now and I think most of the times I say something afterwards I start to self-criticise a lot, so just thinking about that blog makes me nervous. This happens to me often, however I will soon publish more about my lyrics for instance and I think I’m becoming more and more confident with them.

W:  What does your ideal future as an artist look like, and what are your dreams in this respect?

M:  I always want to feel some sort of curiosity and I’d love to work with younger generations and let myself learn from them. And keep collaborating with people in general.
I want to keep up with the learning, and continue exploring from where I am towards wherever I’ll go.