RE#SISTER and the History of a Feminist Festival

An interview with Mariette Groot

From small editions to a nation-wide Feminist Festival – long term WORM worker and curator Mariette Groot revealed more about the roots of creative feminist action in Rotterdam as well as RE#SISTER: the female and non-binary electronic music collective formed in WORM Sound Studio.

WORM: Mariette, you are more than anyone familiar with the evolution of this Feminist Festival. How did it grow into a big festival, the way we know it now?

The idea to make a programme in WORM around International Women’s Day (8th of March) first came up in 2015. Jan Hiddink, our programme coordinator asked me if I was interested to work on this. As we had the theories of Friedrich Nietzsche the philosopher as a recurring motive in our programme, I thought it was funny to use his name, because he was known as someone who had a deep contempt for women. So I gave the event the title: Fuck You Friedrich. We had three editions of FYF at WORM, and every year it grew bigger and more multidisciplinary. The well-known international women’s fund Mama Cash, who have their offices in Amsterdam, picked up on it and in 2018 offered to collaborate with WORM and make it part of a nation-wide Feminist Festival. So what they did was to co-produce and co-curate the festival in several cities. From then on we called it the WORM x Mama Cash Feminist Festival, which took place 3 times, last time in 2020. We were lucky: only a few days after the 8th of March 2020, the country went in lockdown…

WORM: How did previous editions look? What has changed since then?

With time the event only grew bigger. Ever since the FYF times the idea was to make it multidisciplinary, not only music or film but a combination of everything, so it would be appealing to a diverse public. And that was already happening in the first evening, there was a participatory theatre performance, film screenings, performance, concerts, discussion. The discussion element is very important, it is present in every edition. So Fem Fest is not only a celebration of art created by females, but also a reflection on struggles and stereotypes. With time the Queer community also got closer involved with Fem Fest, which made the programme even richer. Kiki Function and KLAUW brought some more exuberant and party vibes, that is why the weekend programme was included. This year is the first time that RE#SISTER is a part of this festival as a group. I proposed to do a workshop for all of the members, which will later result in a concert and everyone liked the idea a lot.

WORM: There are many restrictions for the event sector due to COVID. How do you personally feel about the online format of the festival this year?

It’s not as disappointing as I thought earlier on, because this online event can be joined from all of the corners of the world. It is totally different than earlier. Now you can actually invite people to participate from wherever they are. I like a room full of people, but I also see the pros in this digital festival version. On the other hand, some events like the Kiki Function and KLAUW, especially, require direct interaction and chemistry. A virtual exhibition is also more challenging to set up, Slut Walk is not allowed, so there will be Slut Stand instead, organized by KONTRA. For the RE#SISTER concert and Cult Film Screening it was not so difficult to switch to the online environment. 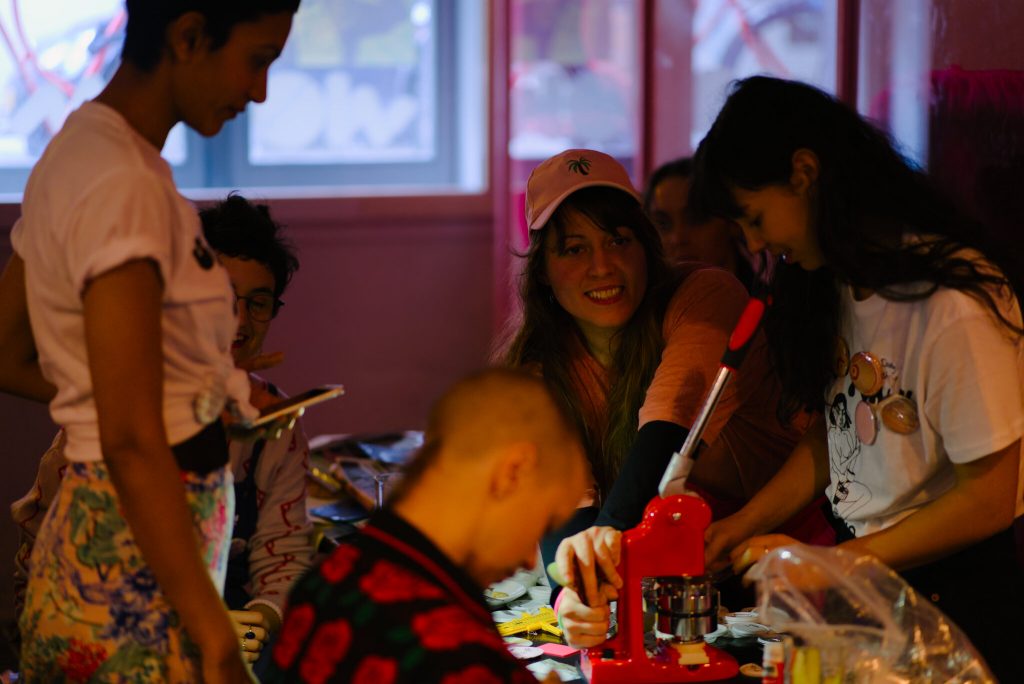 WORM: You are also a founder of RE#SISTER, so I would like to ask how did it exactly come about?

It started in 2018 when I was a bit disturbed by the lack of diversity in the WORM Sound Studio. The idea of a WORM studio is in general that artists propose to do the residency there, and often those are artists that come from abroad to record an album, as WORM is well known for its analogue equipment and vintage synthesizers. But as I checked the studio schedule, I noticed that over the years’ time the male musicians were in majority, so I thought about the possibilities to bring some change, get more women involved, and be more active in the studio myself, as I have a great interest in electronic music. I mailed every female co-worker that was in some way involved with music and asked if they would be interested to form a community and meet regularly, do workshops together and explore electronic sound. Gradually, we realized that WORM is not a regular music school and we prefer the grass-roots way, without the concrete leadership, but rather combining and sharing collective knowledge that people had within the group. As a founder, I didn’t always take the lead but encouraged the initiatives to come up from other members. WORM agreed to give us space, so we could meet around the studio and get to know each other, learn to record and mix, have jam sessions. It’s funny how quite soon people became interested in inviting RE#SISTER to perform as a group. One of our first performances was this Dutch Modular Fest in Den Haag, we performed with a group of 7 people which was quite unusual. But RE#SISTER is all about a unique approach to events and meetings. For example, one person knows about cassette tapes, so she made a workshop about making cassette loops, which later resulted in a performance in WORM S/ash Gallery. Another member is totally crazy about a certain software and offers to teach others about it. RE#SISTER also does radio. Five people, including me, are doing live radio on Radio WORM, as well as Lukas Simonis, who coordinates WORM Studio and sometimes offers commissions for RE#SISTER members to make a radio play for a national radio platform.

WORM: What connects artists from RE#SISTER? What is the vision?

From the beginning until this day, RE#SISTER is an open space for female and non-binary people, you don’t have to pay to be a member and no previous experience is required. The most important component is interest to explore electronic music, field recordings, or any experimental sound. Due to the stereotypes, many females believe that electronic music is too complicated for them and that technology is mainly a men’s thing. It is very important to encourage them not to be intimidated to discover electronic music, even though it is a mostly male-dominated industry, and also provide them with a safe space. People have to feel free, that there are no high expectations about their abilities, even if they have never touched a synthesizer. The good thing is WORM really championed this and supported the ideas of RE#SISTER, and named it as one of its important projects.

WORM: What are the main aspects in feminism you think it’s important to address in 2021? Something that is relevant for the arts sector/music industry.

Talking about the music industry, there is still a lot that needs to be changed. Often music schools promote their courses in a way that is quite stereotypical. For example, we see pictures for the Studio Technology with guys twisting the knobs, and we see a Vocal Training course with a photo of a girl singing. Non-verbal communication can be of great importance for how you want to bring your message across, who you want to appeal to. The electronic music industry is still mostly male-dominated (if you look to the festival line-ups for instance). However, there are many more platforms to promote female composers. There are female musician databases, so bookers never have to say that they were searching for female and non-binary musicians and couldn’t find them. Another thing, I feel that it is very important to have female role models, more women visible in the functions that are mostly associated with men: technical crew, composers, politicians (Kamala Harris is a good example). it would help a lot for the young people to feel that they can also do it and be there.

WORM: Who are the role models and great examples of females in the electronic music scene for you?

One person I often bring up as a pioneer, she is already in her 80s now is Eliane Radigue. She started out as an assistant of Pierre Schaeffer and Pierre Henry, who were electro-acoustic composers, but at some point decided to follow her own path, travelled to the USA, and became a virtuoso on a certain very complicated modular synthesizer called ARP. She really refined her sound, was clear in her mind about what she wanted, so she tweaked and sculpted the sound until it was how she liked it.

Another pioneer, one of the founders of BBC Radiophonic Workshop. The studio that made all of the sound effects for the radios and movies. Her name was Daphne Oram. She didn’t really feel in the right place, so she set up her own business and invented a lot of groundbreaking technologies in translating images into sound.

Those are two people from the past. If we talk about these days, there is a Dutch composer called  Esther Venrooy. She has also explored the ARP synthesizer, but also made other types of compositions. She goes deep into what sound is and how sound functions in space.

And another person, who not only makes electronic music but is a sound artist – Cathy Van Eck. She also teaches and makes sound installations made of different objects and materials – paper, strings, and wood, etc. She is very much about the crossroad between visual, installation art, and sound.

WORM: What would be your advice to the women who want to start exploring electronic music?

The basic advice is not to think that things will be too complicated for you. These days people can start making electronic music from their bedrooms, download software, and start composing. Don’t just assume that you won’t be good enough. Don’t be afraid of technology. 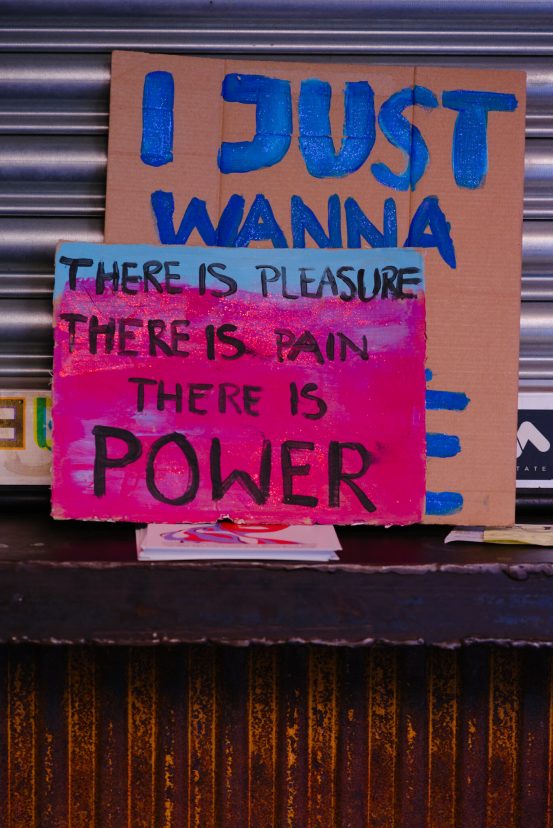