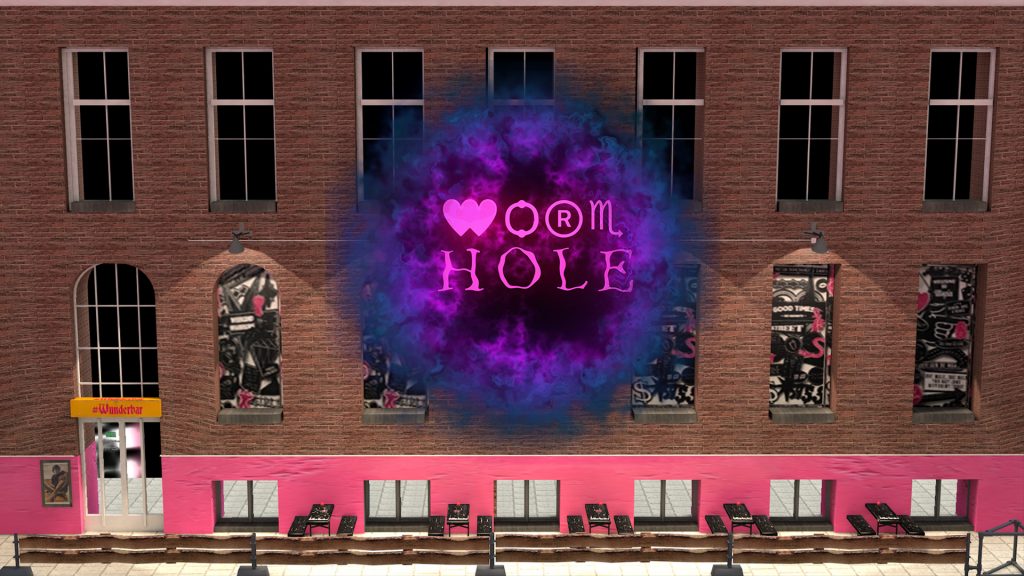 Have you ever played a video game at the location of the video game? … Yes, WORM presents -=WORMHOLE=-, a video game about our space and crew that you can play LAN party style at #Wunderbar on July 30th, 31st and August 1st.

Artists Hyunji Jung, Nils Gunnars and Davids Danoss developed this game as part of their residency in Wunderplatz x SKILLS. You will meet the majority of our staff who were turned into NPC (non playable characters). Together with them, you will run the WORM universe.

-=WORMHOLE=- will be playable on several computers located inside #Wunderbar. If the computer is available, sit down in and enter the virtual WORM. This simulation video game follows the spirit of games like Second Life, Desktop Goose. The game recreates a day as a customer/employee of #Wunderbar, as one of a kind of special evening. In the game we’ve recreated different areas of WORM. You’ll be able to share this expereince with other players who are also gaming at the bar. Come backstage! You are finally allowed to go into the kitchen! Check out the office! Pretend you are our director Janpier!

All three artists are also part of WORM’s family and work in various departments.This is what the makers said about their process:

“The game was created in the period of lockdown. When everything slowly goes back to a semi-normal way of life this summer, it is important to remember and merge the two separate worlds we all have experienced the past year. With this meta experience playing -=WORMHOLE=- while sitting in Wunderbar — we want to recreate and emphasize the mixed reality that has become more and more present in our daily lives. Maybe this could be a relaxed way of getting back to reality? You can attend a bar but still maintain the comfort of hiding behind the screen. During the lockdown we had to push the boundaries of on/off-line lives. This new way of integrating with each other is here and will be in the future, creating a metaverse where the borders of reality are gone. -=WORMHOLE=- simulates this new way of living.”

Hyunji Jung (b. 1991) is a South Korean sound artist currently based in Rotterdam. After finishing Bachelor’s degree in English Literature and Language in Korea, she came to the Netherlands to study fine art at the Willem de Kooning Academy. During the study, her interests in narrative and linguistics were translated into sound, which became the cartographic language in her practice.

She explores compositional process and form of composition embracing the influence of technology in music and art. Her main interest is composing music, soundscape for game, interactive experience as a narrative tool that often result in audiovisual, interactive sound installations. Her sonic research is based on psychoacoustic effects of minimal music ideas implementing analogue and digital synthesis, field recording, instrumentation, in the form of electroacoustic music.

Nils Gunnars (b. 1992) is a Swedish multidisciplinary artist with focus on animation/video and sound installation currently living in Rotterdam, the Netherlands. He obtained a Bachelor’s degree in Fine Arts from Umeå Academy of fine art.

Using images and sound to create abstract stories with a chaotic narrative, where sound and visuals seamlessly blend with each other with the aim of an experience more felt then understood, where the viewer can form their own narrative. The focus lies on colour, shapes and harmony, where unexpected combinations create new ways of encountering your surroundings.

Outside of his own practice he loves to collaborate and help others realize their visions.

Davids Danoss (b. 1991) is a Rotterdam-based multimedia artist, video producer and founder/director of MINT Podium. Originally born in Latvia, he moved to the Netherlands in 2012. He first studied at Academie Minerva for 2 years and transferred to Willem de Kooning Academie and graduated in 2019 with BA Fine Art.

In his work, the theme leans towards reality perception and its manipulation. Questioning the nature of reality that it is only made by scientific discoveries until now, he believes that as a humankind, we can only grasp it by our sensory experience. Therefore he engages audiences in the visual and aural elements by manipulating the feeling of reality. His audiovisual work is not to be seen with a start and end, but more as a timeless experience.

Apart from his art practice, he works as a freelance video producer at his own company MINT Video, mainly registering theatre productions, events, and festivals. Combining his position as an artist and the interest in the stage as a cameraman, he founded MINT Podium, a non-profit multidisciplinary art event/platform organisation providing stages and exposure to emerging artists in 2016. Since then he has been actively engaged in the Rotterdam art scene, producing a variety of cultural programmes and events.