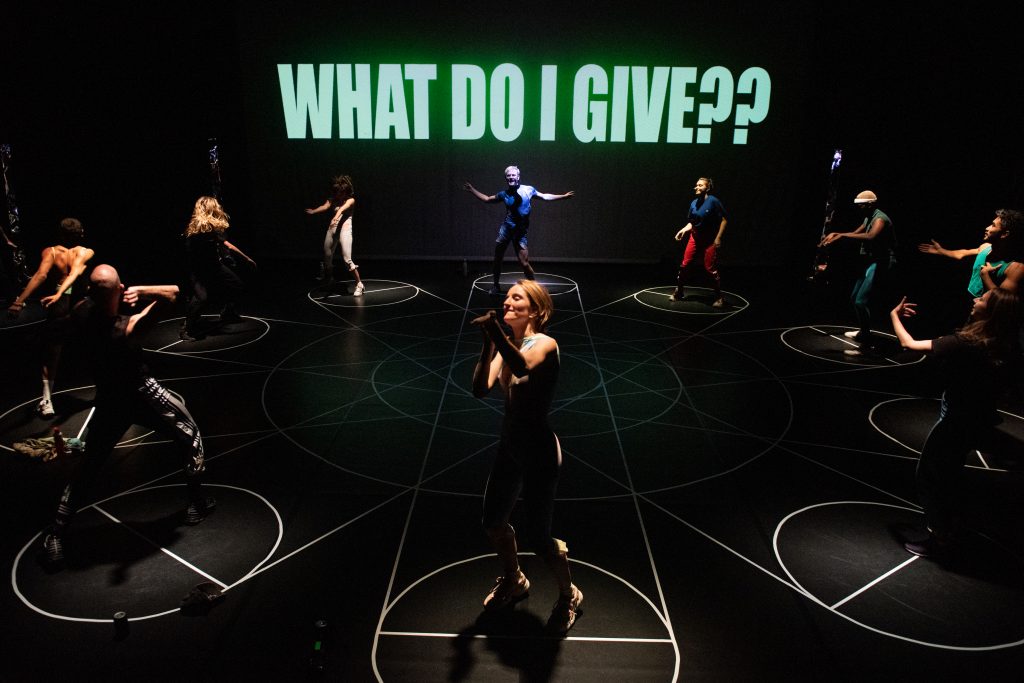 Anthony Hüseyin has again invited Netherlands based queer artists to connect through art, dance, music, politics and so on. This time we have a guest queer band from Berlin.

*A quote from Lexie Davis about the work: *
For the work Demonst(e)rating the Untamable Monster, Caner used motion capture technology to create computer-generated animated monsters, who speak and sing to each other in a two-channel video installation. The artist made the work in response to the mainstream media’s persistent characterization of those considered “other” as “monstrous.”

Dereck Ceyla
Dereck Cayla is a French dancer/choreographer based in Amsterdam. He graduated in 2008 from the Conservatoire National de Musique et de Danse de Paris.
In 2009 he joined ICKamsterdam under the artistic direction of Pieter C. Scholten and Emio Greco. Besides being a dancer in the company Dereck was asked to Choreographed 4 short solos, that were used in the production: "You/Paradiso, La Commedia, Addio alla fine". His work as a dancer at the International Choreographic Kunst Centrum gave him the chance to work for interesting artists such as: Nicole Beutler, Andrea Božić and Robyn Orlin, with who he could explore a spectrum of what contemporary dance has to offer nowadays.

Dereck is now developing his own research and he’s working on a multidisciplinary project named ‘Mermaids’. He is interested in using physical limitation to further develop movement based choreography and inspired by the myth of the Mermaid. This first project is decline into a short dance film ‘Mermaids on a way to dance’ an a dance piece ‘ Mermaids’, and further on a location project combining Film and dance to be performed on public spaces.

Mermaids are a hybrid of nature and people. These mythical creatures inspired Dereck Cayla – who for many years was a dancer at ICK Amsterdam – to create a duet about our human nature. Two dancers follow the sensations and pulsations of their bodies on route to their inner world, which they attempt to give form in motion. And in Chris Watson’s soundtrack – in which recordings of natural sounds play a major role – we also hear echoes of both our closed inner nature and the vast universe beyond.

He stayed connected to the company as a teacher and created Mermaids with the support of ICK. Cayla himself can be seen on stage in Mermaids, together with ICK-dancer Victor Callens.

Sadiqa
Bio: Sadiqa is a non-binary queer artist from Morocco, refugee in the Netherlands, they are a Rapper and performance artist. Through their words they share the beauty, pain, joy, sadness, laughs and tears… because by sharing emotions, stories and experiences we contribute to the creation of a New World Order where Queers rule. Sadiqa deeply believe in the power of Queer art in shaping realities and academia and changing the world towards Queer liberation.
The voice of the Queer: “I wrote this rap song as a dedication to the Queer movement in Morocco… I wrote it to inspire, empower and express anger… this song is the baby of Queer liberation and intersectionality that was born and raised in a Moroccan decolonized culture.
Through the song, I tried to talk about the importance of fighting for our rights as basic rights, as rights for the poor, sex workers, Muslim and non-Muslim queers and gender non-conforming folks in Morocco… I also emphasize the importance of hope, healing and empowerment for a healthy durable queer activism…
I wrote this song from the ink of my bloody heart mixed with the spit of the queer voices that call against oppression… and I hope it will enter the hearths of those listening to it and contribute to a better future for all queer souls worldwide”

Gazino Neukölln
Gazino Neukölln is a Berlin based band playing re-makes and mash-ups of Arabesque/ Pop hits primarily from Turkey. The band consists of women and non-binary members, who made Berlin their place of living within the last decade. Embarked upon the journey in 2017, Gazino Neukölln has performed at some notable venues of Berlin including SO36, Silent Green Kulturquartier and Bi’bak. They wish to contribute to the queer cultural scene in Berlin with their multitude of songs, genres, audience and stories, and imagine to expand their migrant queer community by reaching out to more listeners and collaborators internationally. 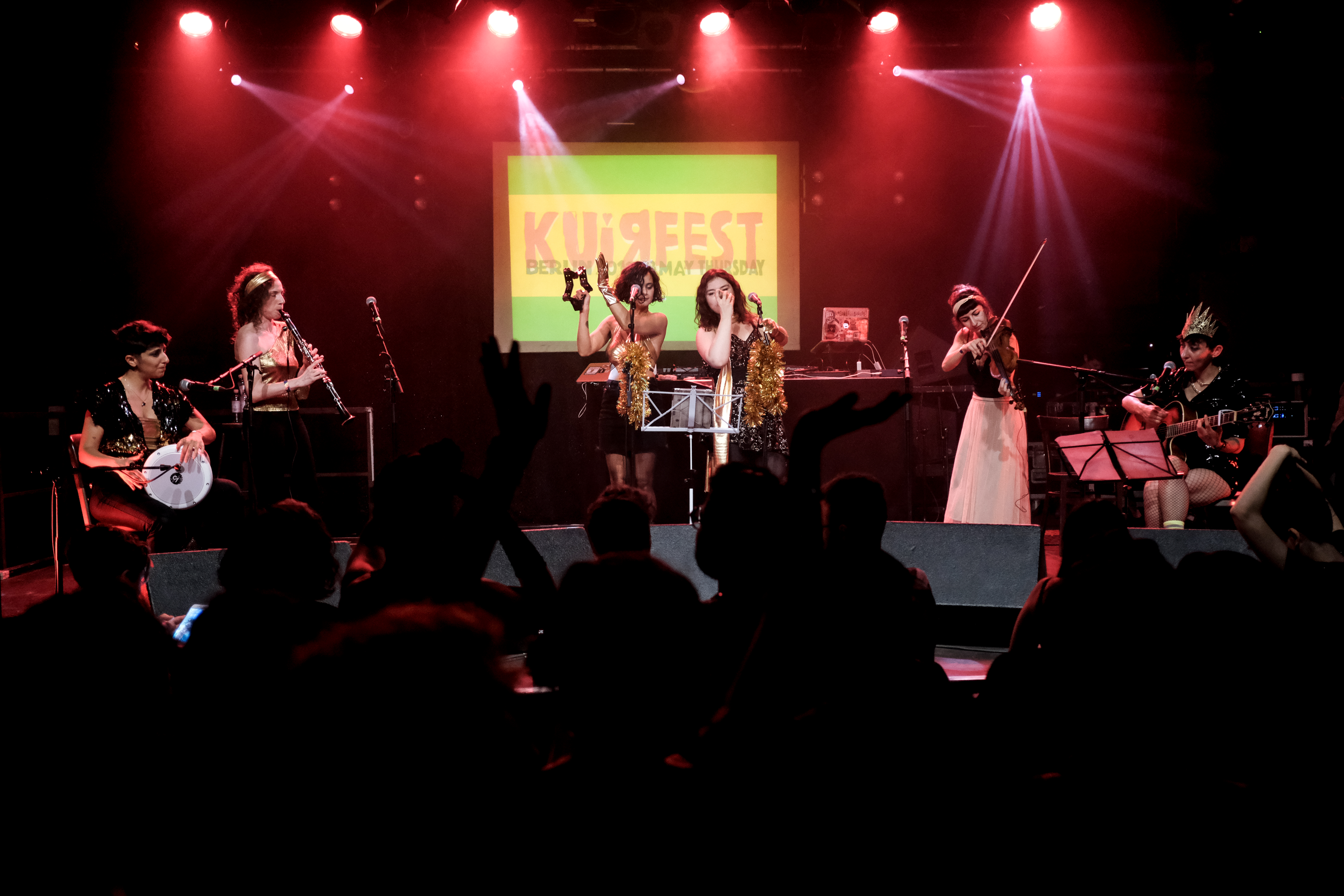 I am going to push this digital space.
I want it to shake.
I want everything in me to vibrate
Until everything is rearranged.

Dancing raving mad, alone, on a roof, in my room, or on zoom were the only moments
I found solace, an opening, a reframing, a new direction, during the past 11 months.

That state of mind, or state of dance, is what I can offer for you.
Clubs are closed – this is a simulated rave space for hyperprocess.
——-
Connor Schumacher is a dance artist based in Rotterdam. With his organization ARK he is trying to make space for using dance as an applied art form. The research is in; dancing together builds the skills for an inclusive and progressive society; so let’s get moving.