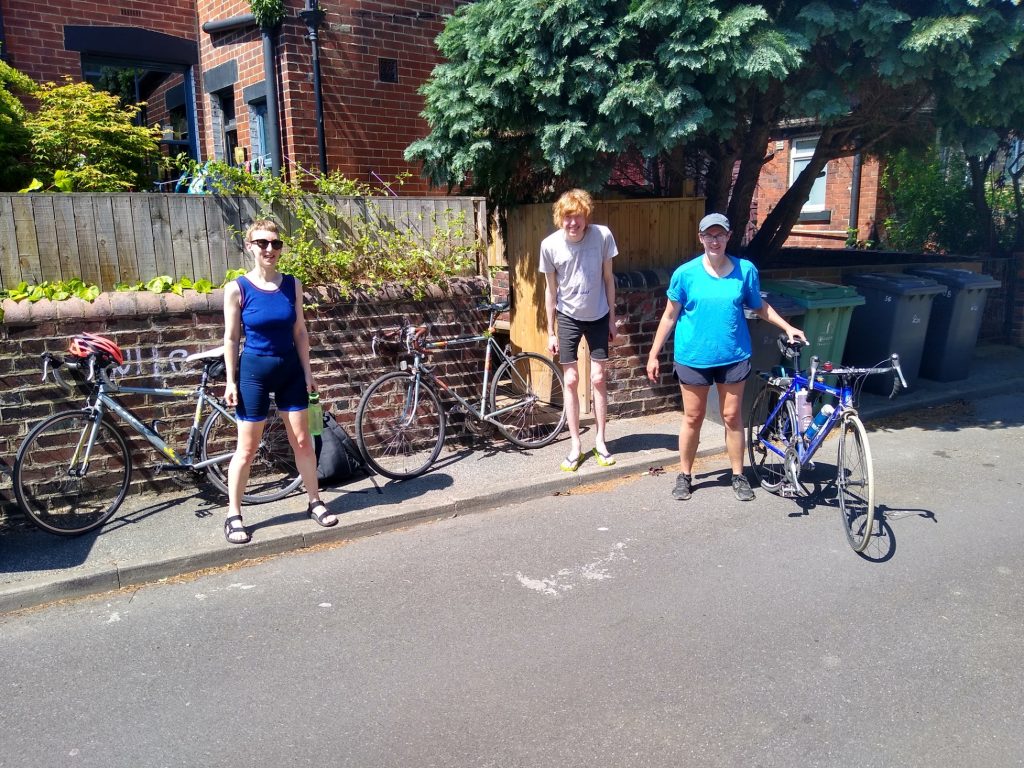 Tickets for V11 can be bought here!

NAPE NECK are a trio from Leeds (UK) playing post-punk that’s simultaneously tangled and taut, danceable and destructed, while resisting attempts to be easily situated as the latest addition to a specific geographic and genre-based continuum that stretches back to Gang of Four and Delta 5. Nape Neck’s knotted rhythms and the intersecting/overlapping vocals from all three band members bring to mind Scissor Girls or Erase Errata who also drew inspiration from the spiky tension of first wave UK post-punk and translated it through the more wild and free tendencies of DNA descended downtown art-noise. Clipped Morse code rhythms and sharply punctuated lyrical declarations join forces with delirious, snaking guitar and dueling vocals which push against steady bass throb and stark, calculated beats as Nape Neck walk the tightrope between chaos and calm. Through extensive touring of Europe in other bands (Beards/Guttersnipe) the members of Nape Neck also bring a deep love for DIY sounds and connection, which shows in their organisation (both compositionally and operationally). Nape Neck is Claire Adams on bass guitar, Bobby Glew on guitar and Kathy Gray on drums. They all sing. The “Look Alive” EP released in March 2022 was followed by an intensive European tour featuring 24 gigs in 25 days.

HANDLE
Rhythm-minded clatter and clang from a trio that mutated out of the Manchester band D.U.D.S., whose particular union of scratchy dancefloor funk and taut, minimal post-punk had first been set into motion by late ’70s phonk UK firebrands like A Certain Ratio and early ’80s post-No Wave downtown dwellers like Liquid Liquid. HANDLE clearly shares some of that same genetic material, while operating with a paired down set of tools (bass, drums, keyboard, voice, no guitars) and some adventurous tendencies that give their debut LP a more distinct musical identity. Leo Hermitt’s vocals bounce from punctuated yelps to monotone narrations to abstracted wordless noises, matched by snapping bass throb, mutant disco beats, and washes of warped and feverish synth that collectively add up to something vaguely approaching an all-night, bleary-eyed nightclub version of This Heat. The more linear, sharpened moments amidst the experimental detours here are the ones that have the most immediate impact, like the monotony of modern life commentary “Life’s Work” that twists into a delirious 99 Records-style infinite loop groove with a repetitive chant of “Definition, definition / Useless, useless information” pulling the the underlying rhythm even tighter. New record forthcoming. Maximum agitation!

Venus Tropicaux
One of the great Rotterdam acts of the last decade, the scratchy, in yer face, sonic beat poets Venus Tropicaux return to the place they debuted (albeit in another guise), at V11.