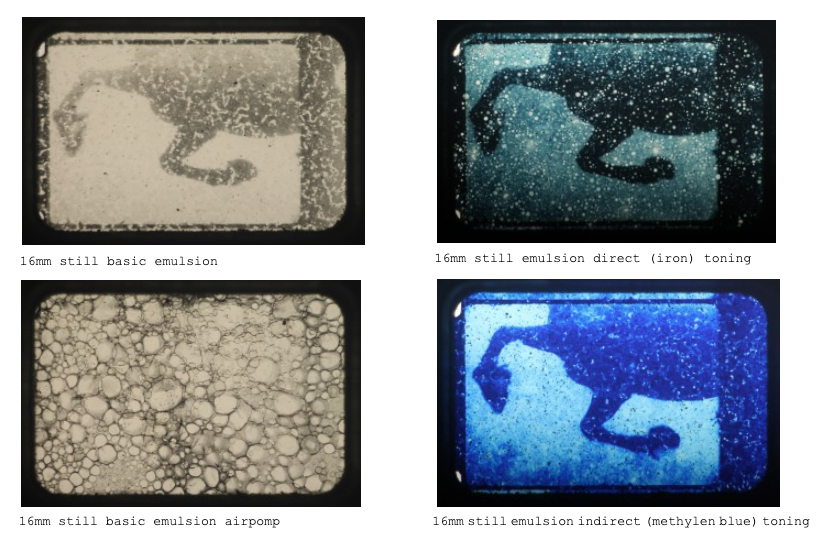 The Photographic Garden project sees Filmwerkplaats researching (and developing) photochemical processes that do not unduly burden the environment. This involves developing processes based on plants and home-garden-kitchen ingredients with low toxicity. An alternative chemistry that will yield a different, new film aesthetic. One in which the (chemical) components and their origin come to the fore and the physical processing of the (film) emulsion during the DIY process is emphasised.

Working with analogue film involves a large number of chemical processes. To make the invisible (latent) image that is formed by the exposure in the light-sensitive layer of photographic film material visible, a number of “development” steps are necessary. This laboriousness is an intrinsic part of the changed process of making film, the transformation from a once industrial production process to an artistic, hands-on (Do-It-Yourself) ‘alchemically’ oriented production process. It is this fascination with materials and processes that increasingly characterizes analogue film culture. Film as an empirical and tactile research field, a photochemical playground!

There will be 6 online public lectures open to anybody with an interest in film. Tickets are FREE

* Tinting toning with plants and other materials from nature – Lecturer: Joanna Mayes

* Pioneering to capture an image with light – Lecturer: Mark Osterman

These lectures will be hosted on ZOOM, you can register HERE in advance. After registration, you will be given an access code to log in as a listener (mute). Questions can be asked via the chat function.

The process of making your own silver-gelatin film emulsion is one that offers the filmmaker an unprecedented degree of creative intervention and expressiveness that simply cannot be accomplished with commercial film stocks. Although not a replacement for commercially produced film stocks, hand crafting and coating silver gelatine emulsions can lead to new and creative ways of forming cinematic images.

The starting point is home brewing a photosensitive emulsion that covers the 16mm film strips. A black-and-white emulsion is easily made with some silver nitrate, potassium bromide, gelatin and water. It’s actually similar to making mayonnaise. The biggest challenge is to evenly coat the emulsion on the thin strip of clear 16mm film and make it in a way that is possible to run it through a printer or a film camera.

“My focus on making my own emulsions started from the desire to create colour film, not in the way as we know it, I prefered to boldly go beyond the realistic nature of contemporary materials and achieve results that are completely different and unique. My interest is in re-inventing the early and abandoned inventions of creating colour from black-and-white images. Following the footsteps of the pioneers of the photochemical film medium”. Esther Urlus – Re:Inventing the Pioneers: Film Experiments on Handmade Silver Gelatin Emulsion and Color Methods (2013)

Esther Urlus (the Netherlands) makes films, performances and installations on 16mm, 35mm and Super-8. The DIY method is always present in her work. Urlus is co-founder and chairman of the artist-run Filmwerkplaats lab in Rotterdam. Her films have been screened at festivals worldwide, including 25FPS Festival Zagreb, Ann Arbor Film Festival, Oberhausen International Short Film Festival, Sonic Acts and International Film Festival Rotterdam