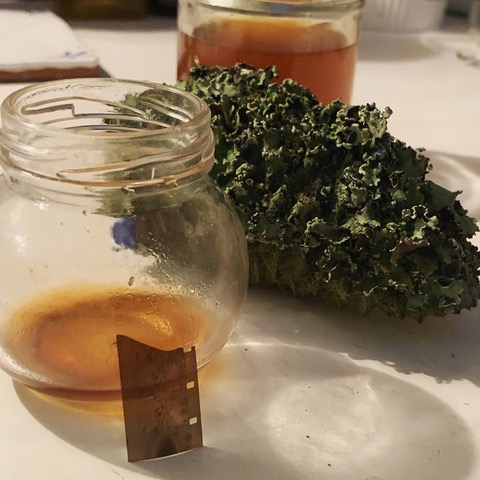 The Photographic Garden is a series of lectures & research workshops, filmic try-outs and presentations host by Filmwerkplaats, Rotterdam. The goal of the project is to explore questions of environmental consciousness around analog (or photochemistry) filmmaking, and what new artistic potential can be released from this approach.

These lectures will be hosted on Zoom, you can register in advance by buying a ticket. After registration, you will be given an access code to log in as a listener (mute). Questions can be asked via the chat function. Tickets are free.

PLEASE SAVE THIS ZOOM LINK TO USE WITH YOUR PASSWORD!

This workshop will be looking at alternative approaches to the use of colour in more eco-conscious, hand made and site-responsive filmmaking methodologies.

Current more eco-friendly processing methodologies, such as caffenol and plant developers, do not facilitate colour choices by the film artist, only those produced as a side effect of the processing materials. Joanna has been working with alternative approaches to producing colour and will share what has (and also what has not!) worked in her research experiments, hoping to offer support to those who are experimenting with their own local organic materials. Joanna will also share her approach of considering the organic nature of film emulsion, returning to heritage wool dying processes in her search for an alternative lineage to colouring (tinting) organic materials. Alongside, she has been exploring the possibility of using found materials from site, such as those from a Cornish tin mine, to tone the film.

Background: Before the invention of colour film (in the 1950s), there was a lot of experimentation with ways and processes to give film colour. One of the most popular processes from the pioneering phase of motion picture film was "tinting & toning" of the black and white film image (formed by a silver emulsion). Tinting is the process of colouring the transparent (white) part of the image by immersing the film in a dye bath. When toning, the black metal silver particles in the film emulsion are converted to a colour with chemicals.

As film itself was only invented after the industrial revolution, aniline dyes, discovered as a by-product of coal production, were used as standard, giving a stronger and more stable effect than those from plants or other found materials.

Joanna Mayes is a film artist living in Cornwall who explores the experience of being in a location at a particular time through the medium of film. She represents place through a layering of approaches to materiality: analogue film responds to the light in that place and time, physical outcomes are often charged with atmosphere from the site through use of materials of the locality, such as seawater for processing and lichen & berries for tinting the film. 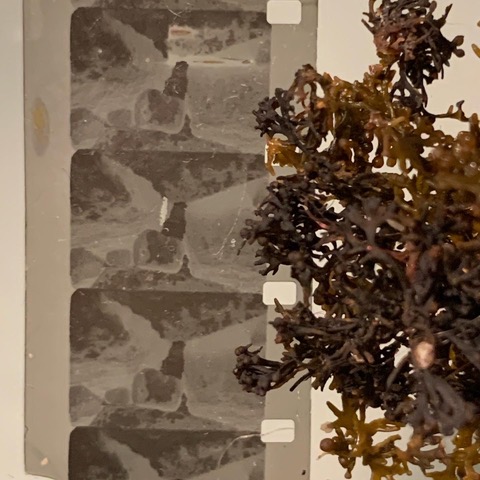 Working with analogue film involves a large number of chemical processes. To make the invisible (latent) image that is formed by the exposure in the light-sensitive layer of photographic film material visible, a number of "development" steps are necessary. This laboriousness is an intrinsic part of the changed process of making film, the transformation from a once industrial production process to an artistic, hands-on (Do-It-Yourself) ‘alchemically’ oriented production process. It is this fascination with materials and processes that increasingly characterizes analogue film culture. Film as an empirical and tactile research field, a photochemical playground!

With the Photographic Garden project, Filmwerkplaats wants to research and develop photochemical processes with which we do not (or much less) burden the environment. Processes based on plants and home-garden-kitchen ingredients with low toxicity. Alternative chemistry that will yield a different, new film aesthetic. One in which the (chemical) components and their origin come to the fore and the physical processing of the (film) emulsion during the DIY process is emphasized.

There will be 6 online public lectures open to anybody with an interest in film.

The lectures are intended as practical modules, a kind of starters guide to practice the topics discussed hands-on at home. We want to encourage personal experimentation and try-outs through formulas and processes provided during the lectures. We will provide the commitment to making sure these techniques, tricks and handy tips are openly available to all who might need them. Therefore all the activities will be available online as a free resource publication after the project ends.