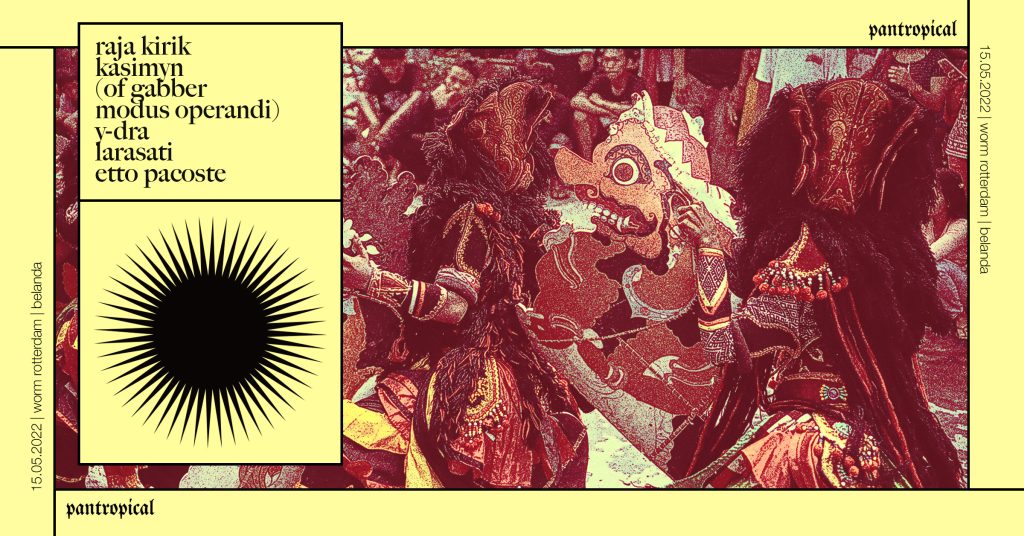 It’s been nearly two years since we’ve managed to put together a real, face-to-face event, so we’re itching to get cracking again. At this edition we probe the outer limits of sound and dance music with some of the finest artists from the Indonesian islands of Java and Bali. They will unleash incendiary interpretations of the archipelago’s trance dance practices and local hybrid pop, while staying firmly in touch with international developments.

✹ RAJA KIRIK (ID | yes no wave, nyege) – live
Raja Kirik (Yennu Ariendra and J. Mo’ong Santoso Pribadi) explore the traditional trance dance practices of East and Central Java, Indonesia, such as Reog, Jaranan, and Jathilan. These dances draw on magic, shamanism and animism to explore a history (not in the least place the history of Java under Dutch colonial rule) that is at times dark, chaotic and violent. They have long served the local people and their efforts in relation to cultural resistance, and are still relevant amid current political struggles. In Raja Kirik’s sound, syncopated electronic rhythms frolic beneath meanderings of homemade instruments built from waste materials. Trance-inducing metallic percussion are in dialogue with melodies out of makeshift wind instruments. With frantic, seemingly endless forward momentum, the music of Raja Kirik inhabits a wide emotional breadth. The duo has released their self-titled debut and 2020’s ‘Rampokan’ (licensed to Nyege Nyege Tapes last year) through the Yes No Wave label.
https://yesnowave.bandcamp.com/album/raja-kirik

✹ KASIMYN (of Gabber Modus Operandi | ID)
Kasimyn is one-half of Gabber Modus Operandi – the Bali-based duo that jumped to the forefront of the Southeast Asian underground in 2018. As with GMO’s incendiary blend of modern and traditional/ritualistic sounds, Kasimyn’s solo work also drives Indonesian music to new extremes. He mixes Indonesian harmonic scales (such as pelog and slendro) with modern contemporary dance music. His mix for Crack magazine presents Wisisi music from Papua, and his ‘Pedas Sumatra’ mix for Pantropical (made with help from Enggohoi) focuses on grassroots synth-based dance music that is often played at wedding parties, harvest ceremonials and other events of northern Sumatra. While it may not be easy to wrap one’s head around these sounds and origins as an outsider, Kasimyn’s sets are always an adventurous and fun journey.
https://soundcloud.com/platform/hard-dance-009-gabber-modus-operandi?in=platform/sets/hard-dance-mix-series
https://linktr.ee/Kasimyn

✹ Y-DRA (ID)
Yennu Ariendra aka Y-DRA is a music composer, producer, musician, DJ and digital artist from Banyuwangi, East Java. The values of tradition and Indonesian (Javanese) history are recurring themes in most of his hybrid works. He is half the duo Raja Kirik, is involved in the art collective Teater Garasi, Papermoon Puppet Theater, and various other projects. His Y-DRA album “No Brain Dance” (2019, Yes No Wave) blends techno and IDM with the rhythmic elements of Dangdut Koplo (which means “no brain” or “stupid” in Indonesian slang), which is a popular Indonesian music genre that channels the sentiments and experiences of the Javanese working class. This release can be seen as a precursor to Yennu’s current “Koplotronika” project.
https://yennuariendra.com | https://koplotronika.blogspot.com

✹ LARASATI (R’dam)
LARASATI is the DJ alter ego of Rotterdam-based designer/artist Insan Larasati (they/she), who has a penchant for euphoric, high bpm sounds that they extract from all kinds of genres, mixing post-deconstructed club and hardcore as well as breakbeat, trance and hyperpop. For Pantropical they will prepare a set that will be split into two parts; the 1st consisting of mostly Southeast Asian post-club and experimental artists, and the 2nd consisting of cheerful dangdut/funkot tunes.
https://soundcloud.com/larasati-dj

This event is supported by:
Non Native Native | https://nonnativenative.com
and ook _ | https://www.instagram.com/ook_huis