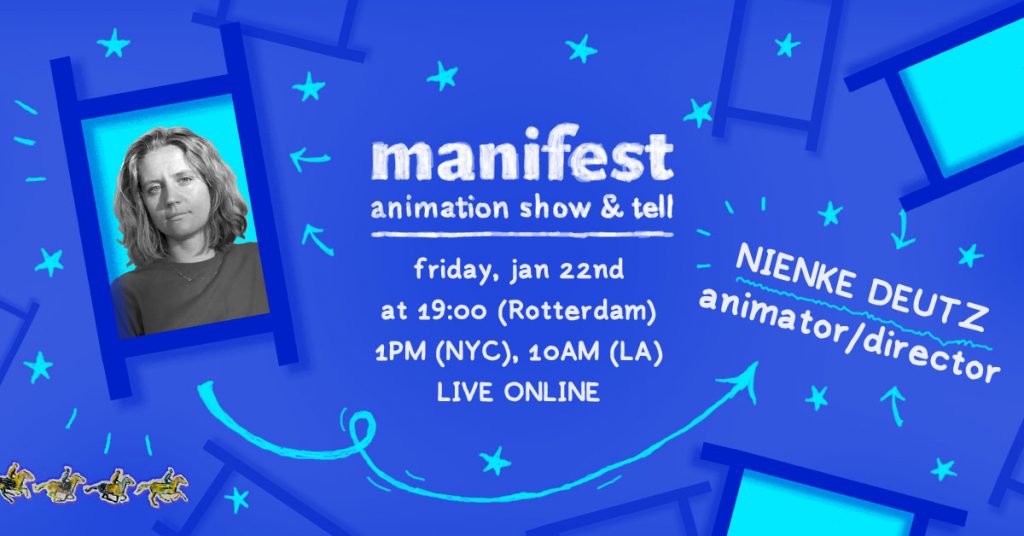 Very much looking forward to chatting with Nienke Deutz about an animation she finds inspiring. That’s right, this will be the shortest video link in Manifest so far, since Nienke is also in Rotterdam! The time of the live stream will be 19:00 our time, which is 18:00 in London, 1PM in NYC, 10AM in LA/Seattle, or 3AM in Tokyo (sorry Tokyo!). The event will be available to view after the fact, but if you tune in live you can contribute to the discussion via the chat box.

You may recognize Nienke’s name from her short film Bloiestraat 11, a touching portrait of young friendship and growing up. I’m very curious to see what she will pick to talk about!

Nienke Deutz is a director and animator based in Rotterdam, the Netherlands. Exploring the narrative and formal possibilities animated film has to offer, she combines various animation techniques and ways of storytelling. She studied fine arts in Maastricht and got her master degree in animation at the school of arts in Ghent, Belgium. Her debut film Bloeistraat 11 won over 30 awards including the Cristal for best short film in Annecy, the grand prix at Stuttgart Festival of animated film and the grand prix at Tokyo Anime Award festival.
(Manifest graphic design by Oana Clitan!