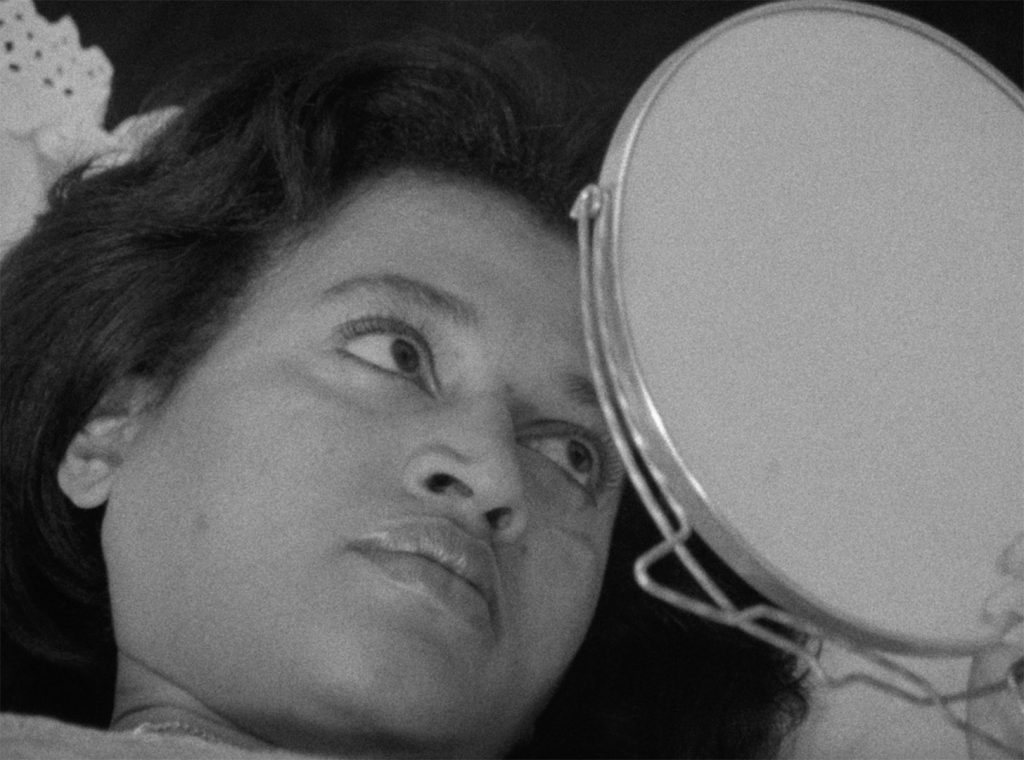 A collection of radical documentary and narrative films on the politics of representation made by pioneering female filmmakers. These films deconstruct unequal power relations with their experimental styles and confront the audience on the politics of the image. By using their position as filmmakers to explore notions of femininity and the male gaze that often dominates popular cinema, they shed light on the peripheral spectrums of the human experience.

ABOUT THE FILMS
Lie Back and Enjoy It, JoAnn Elam (1982)
An eight-minute dialectical film about the politics of representation. More specifically, it examines the politics of filmic representation of women under patriarchy. An undergraduate male student paid it a true compliment in declaring that he can no longer look at a woman in a film without thinking about the consequences of the filmmaker’s use of her as a person and as a spectacle. The film is endowed with remarkable structural and rhetorical lucidity. Its image track consists of technologically manipulated images of women, and some printed titles. Its soundtrack consists of a dialogue between a Man (a filmmaker) and a Woman (of whom he’s going to make a film).

Killing Time / Fannie’s Film, Fronza Woods (1979)
Part of the mediamaking movement that first gave centrality to the voices and experiences of African American women during the 70s and 80s, these two re-releases are no less groundbreaking today.
KILLING TIME, an offbeat, wryly humorous look at the dilemma of a would-be suicide unable to find the right outfit to die in, examines the personal habits, socialization, and complexities of life that keep us going.
In FANNIE’S FILM, a 65-year-old cleaning woman for a professional dancers’ exercise studio performs her job while telling us in voiceover about her life, hopes, goals, and feelings. A challenge to mainstream media’s ongoing stereotypes of women of color who earn their living as domestic workers, this seemingly simple documentary achieves a quiet revolution: the expressive portrait of a fully realized individual.

Who Do You Think You Are, Mary Filippo (1986)
In “Who Do You Think You Are”, the main character, a filmmaker, investigates her own cigarette smoking habit while wishing she could make “a film about injustice.” She wishes, in other words to do something heroic. She has been seduced by the image of the cigarette-smoking hero, but an image is only an image.

Popsicles, Gloria Camiruaga (1982)
The voices and actions of a group of girls licking popsicles while reciting Hail Marys create an enveloping scene of restrained violence. The girls (including the artist’s daughters) obsessively repeat their prayers and lick the popsicles until they discover in them plastic soldiers. In the Chilean context in which this work was produced, under the dictatorship of Augusto Pinochet (1973–90), the combination of the sensual and the playful constituted a biting commentary. The girls’ action alters the normal order of a militarized society, turning the political context into a game. The girls’ tongues, stained by the popsicles, bear the trace of the action—an impregnation that can be understood as inevitable contamination or as a mark of desanctification.

Fake Fruit Factory, Chick Strand (1986)
Chick Strand was an American experimental filmmaker and a pioneer in blending avant-garde techniques with documentary. Strand contributed to the movement of women’s experimental cinema in the early 1960s–1970’s.
The film documents young women making artificial fruits and vegetables in a small factory in Mexico with a gringo boss and his Mexican wife (latter owning the factory). The main focuses are the color, music and movement involved and the constant gossip about what the women think of men.