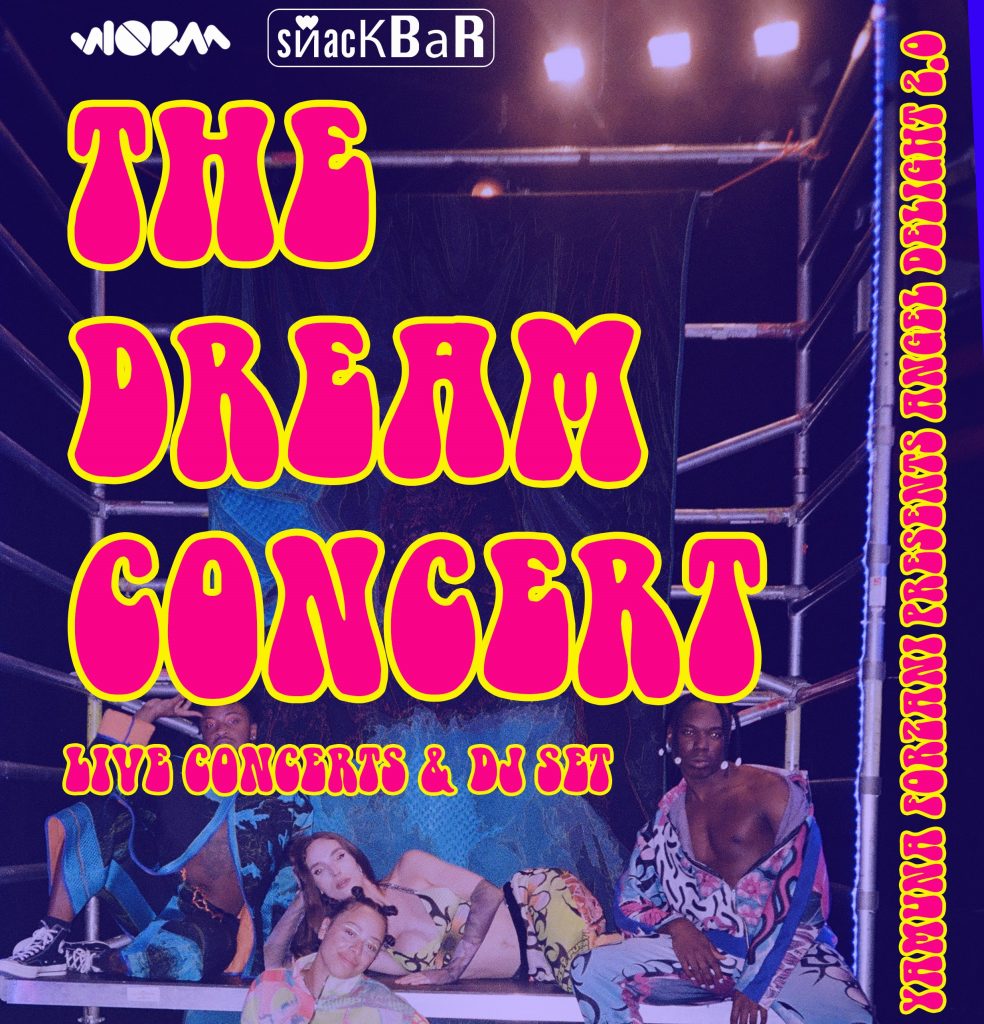 Forzani Soundsystems presents – The Dream Concert
Yamuna Forzani takes over WORM’s Tuesday Concert Night. On the 25th of October we don’t serve snacks we serve you LOOKS, hunney! Yamuna will showcase her latest collection in the form of an acoustic performance presentation, think NPR’s tiny desk concert on acid. There will be a line up of two live acts and a DJ set to round the evening off.

LINEUP:
🌸 Wiam The Music
Playing her first set as a DJ, Wiam The Music is bringing the feel good waacking vibe to our night, playing a mix of disco, funk & house, she will kick off and close our night to set the mood.

🌸Sono
Sono is an artist with Indigenous roots.
Making music came natural to them and was the start of a beautiful healing process.
Influenced by a mix of genres like, Indie, pop/rock and r&b, Sono sings about forbidden love, freeing your mind and heartbreak. Sono realised that music is therapy, poetry, love, friendship and life. With their music & lyrics, Sono is creating a voice for themself. They aim is to inspire other people to create a voice of their own as well.

🌸Sophia
It’s okay to be vulnerable is the core message of Sophia’s recently released debut album Fragile. Dancing tight on the border between pop and R&B, the Rotterdam singer-songwriter himself sets a good example. For example, on ‘Questions’ she sings about her absent father and on ‘Ass Out = Trash Out’ she settles with her fraudulent ex-manager. Although Sophia releases her music independently, Fragile has already been picked up internationally. A walls-down, neo-soul effort effort that tackles everything from heartbreak to family abandonment.

🌸Zulu Green
(she/he/they) Born and raised in Amsterdam, Zulu Green claims to be a Hip-Hop & Soul influenced musician who translates vibrations. Her music varies from trap to sultry 90’s tinged R&B, which, like Green, cannot be pigeonholed. Thier music is Unapologetically BLACK, QUEER & VIBEY!

ABOUT Angel Delight 2.0
The Angel Delight 2.0 Residency surrounds the concepts and ideologies of Yamuna Forzani’s artistic practice as well as her ideologies and involvement in the Dutch Ballroom scene.
During 22nd, 23rd and 25th October there will be two evenings of workshops that give a deeper understanding and context of the ideologies and concepts of Forzanis work. The climax of this residency will be Yamuna Forazni’s fashion presentation on 25th October that will be in the form of a live concert. This show will showcase a select musical talent from the queer scene and showcase Forzani’s latest collection.

Yamuna Forzani is a multidisciplinary artist and designer from the UK, who graduated from The Royal Academy of Art. She is also a member of the ballroom scene as a member of Rotterdams Kiki House of Angels and internationally a member of the House of Comme Des Garcons. The first Utopia Ball x Fashion Show took place in 2018 in the Hague and since then progressed and grown. The 4th edition took place this past June at the Kunsthal, organised in collaboration with Seven Angels. This october Yamuna Forzani is also nominated for the Dutch Design Awards for her artistic direction of The Utopia Ball x Fashion Show.