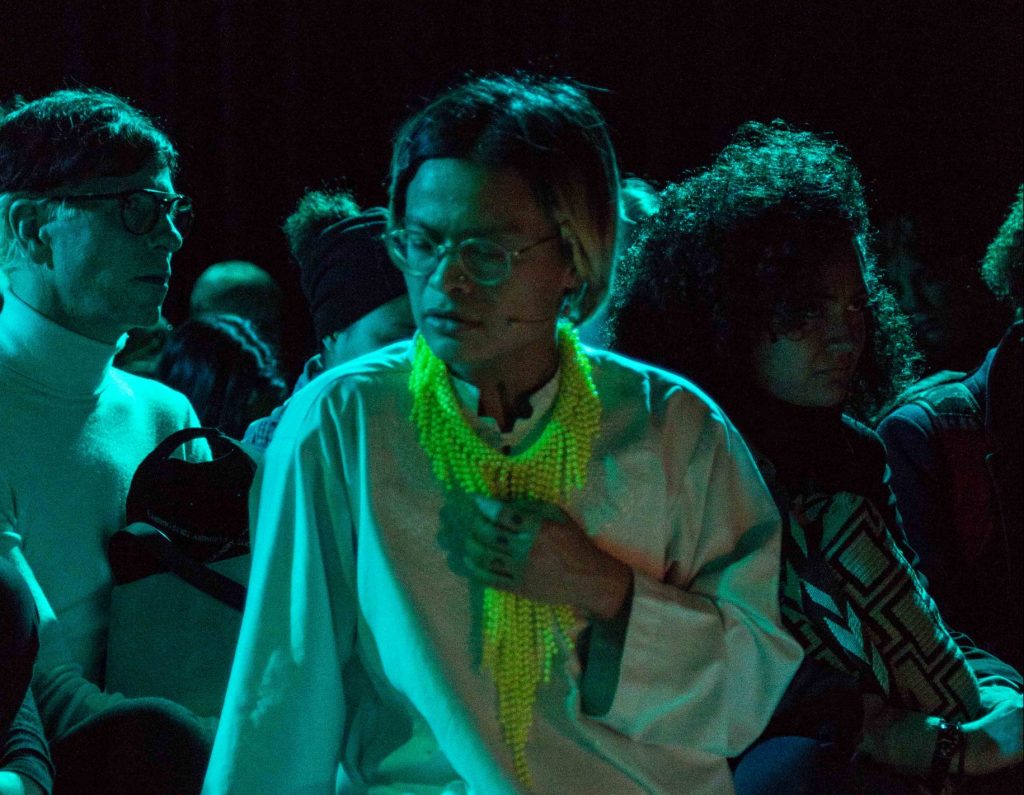 Throughout October, Raoni Muzho Saleh will assemble a ‘moaning choir’ to research the following question: what happens to our bodies when we are engaged in a space of collective moaning? Raoni is a choreographer and performer, based in Amsterdam. Born in Afghanistan and raised in Pakistan, his thinking and work is shaped by fugitivity as a radical movement. Through his personal gender transitioning he has been generating a movement practice of becoming other, meaning becoming body and spirit unknown to oneself. His recent works are materializations of the seduction of the backspace, which is a concept, a relationality and a spatiality that provokes transformational multiplicity and aims for a sense of being freed from deeply ingrained algorithmic oppressions of binary thinking. In his works he approaches the voice and materiality such as textile, fabrics and dough intertwined intimately with the human body in order to disrupt a fixed sense of subjecthood.

We sat down with Raoni to learn a little more about his work, and his interest in mourning.

Could you talk about some of the topics that you’ve explored as a performer in your previous work?

In the past, I’ve explored topics around mothers, monstrosity, and gender. My research on motherhood is ongoing. It comes from a spiritual place where I think about motherhood through deities and goddesses. Then I try to understand how I can bring these deities into my relationship to my own mother, and to motherhood in general. That’s something that I’ve been working on with my [drag] character ‘Lashes.’

In the past I created a piece with multiple monsters. I wanted to think about the stage as a place where these dormant laying energies can come to existence.  Something really magical happened when I let go of choreographing every step, and when I instead learned to trust and allow the performers to find their own way to their monster. The stage became this magical place where the monsters could really come to life.

I know that now you’re researching grief and mourning. Where did this interest come from? And how has it transformed over the years?

It mostly comes from personal experience. I’m from the Shia religion and in this part of the Islam there’s a month of mourning, month of Muharram, that commemorates a historical religious battle. During this month everybody, young and old, gathers, and there’s delicious food all the time. Where I grew up in Peshawar, Pakistan there would be a whole square filled with 500 people dressed in black. And everybody would hit their chest in unison so that it echoed through the whole space.

My mother has always been very strong. For four years, while my dad was in his asylum process in the Netherlands, my mother was kind of a single mother taking care of her children. I would never see her cry. But in these months I could see her cry. She had a lot of family members that she lost in war. When I was really young something in me knew she did not cry just because of this religious commemoration, but that it was a moment that allowed her to gain access to an emotional release that had been built up for a year. So on a personal level, I feel the need to create spaces where grief can happen collectively.

My research around grief was also inspired by the work of Joy Mariama Smith, who introduced me to the work of Martin Prechtel. Prechtel is a shaman and teacher initiated by a Tz’utujil shaman Nicolas Chiviliu Tacaxoy, and he speaks about grief and praise being like two sides of the same coin. When you grieve something you’re immediately praising the life that something had. And if you praise something, you’re immediately faced with the mortality of it and thus you’re grieving.

In one of his lectures Martin Prechtel said that he can make such an intense sound that he can make a stone weep. When I heard him say that I saw it as a personal challenge to also make the stones weep. I see my devotion to using the moan as a sound as the big catalyst for mourning. I am trying to share with people spaces dedicated to the moan and collective moaning, so that perhaps together we can make the stones in our heart weep and melt.

You’ve brought up the character of ‘Lashes-’ could you speak more about this character?

So, first of all, Lashes wears all white. I read about an apparition in white and kind of a nod to, a deity from Aztec theology called La Llorona. La Llorona is basically the mother who has lost her children, so she’s wailing and weeping. And she’s the deity that women would pray to when they would perform mourning rituals for their lost children.

Lashes came really from this personal place where I wanted my old self to still be of guidance for my current life. Instead of cutting away my old self or to call that person “dead”, I wanted to give this old self through this character a new place and point of reference.

Lashes also belongs to the tradition of professional mourners. Native peoples all over the world have had this tradition of working with professional mourners (both men and women). They look for people who are very sensitive, and who can feel their own or other people’s emotions in their body very easily. These people are literally asked to choreograph a grieving space. So in these traditions, the professional mourners enter a space and immediately feel what’s going on. They’re informed about whose death it is. And almost like a trance, they immediately go and sit in the middle of the space they start wailing and mourning the lost person.

Moaning together refuses the privatisation of grief and shadows in our lives. I wanted to create a space where we can be in the shadows together. It doesn’t mean that we have to be immersed in each other’s shadow, but there’s at least a space that is dedicated to our shadows.

I love the huge sonic spectrum that is the moan. When you’re focused on listening to someone and allow your body to receive the sound, to be touched by the sound, you will learn that there is more than just listening to words. What is sitting in the voice of this person, what is this person telling me through the sounds that they’re making? And how does that move me?

I want this to be a space where there is no pressure to resolve what has happened. There’s nothing to fix, but instead we can just keep on wailing together. And as the sounds are being made, and as participants listen to the sound of others, something in the emotional landscape of the body is being moved. It’s beyond me and beyond the other people. And that’s why I love to do it collectively. It has this powerful ability to make people way more sympathetic listeners.

Do you have a personal favourite type of moan?

I really like the nagging moan. It’s one of my favourites because children nag so well. As you get older, it is easy to suppress that inner child. But it is really great to feel really sorry for yourself and moan about your dissatisfactions. I like to give space to my inner child through the nagging moan.

And then my other favourite is the singing wailing. This moan I find beautiful because immediately when I do it, it touches something in my body. I also use it a lot for my prayers. It makes me feel immediately connected to my emotional landscape and to something that is way bigger than me. Like there is an old kind of hurt that is way bigger than me. And as I let the sound go, I connect to the rhythm of that hurt. I find it spiritually very beautiful to be connected beyond my sense of self.

What do you hope that participants get out of this residency?

I hope that by focusing on listening and responding from the body, people can learn to tap easily into the emotional intelligence of their body. I hope they learn how to access the moan as a wide sonic spectrum, and learn how to give it expression. I hope that people’s relationship to their voices can change, and that they can more easily express themselves. Not only with words, but sonically too. When you learn to let go of caring how your voice sounds, you’ll learn that there is something about the voice that can allow for expressions that are the monster within.

Yeah, and then I hope we have fun doing it. Laughing about all the silly and intriguing sounds that are being made. These kinds of errors can also be a playground to experiment with. I just hope that people feel free to play around with their voice and learn to use their voice in order to connect and express their emotional landscape.

Are you interested in joining the moaning choir? You can register here.