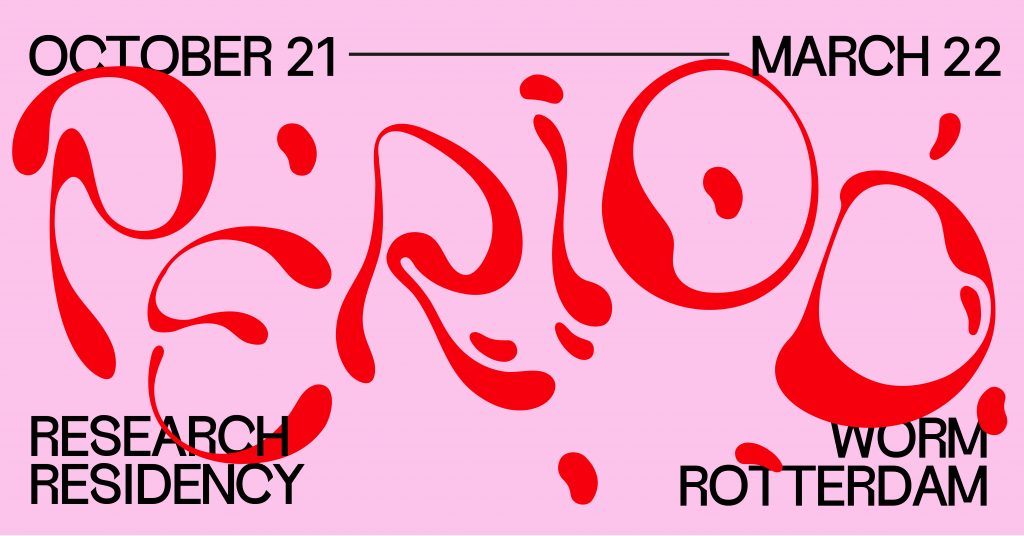 So Sekai, a lot of your work is around spirituality and ritual within the Black community. I was curious about where this interest comes from, and what have been some of the things that you found in your research.

This autumn, the WORM Pirate Bay will welcome Sekai Makoni to facilitate “Period. – a community based research project for Black people experiencing menstrual difficulties.” Sekai is assembling a group of 8-10 Black people who will share their experiences with their periods, and try to unearth pain management approaches that are distinct to those of African or Caribbean heritage. There will be 6 sessions (across 6 months) intertwining personal reflection with practical workshops hosted by specialists in alternative health practices.

Sekai is a researcher, organiser, writer and podcaster with roots in the UK and Zimbabwe. She is a graduate of the Sandberg Institute’s Critical Studies and also holds a Masters from the London School of Economics in Race, Ethnicity and Postcolonial Studies. Sekai’s previous work explores Black Feminism, Southern African colonial history, Black Queer re-imaginings of church, healing, faith and ritual. She is interested in how artistic practice might create space to explore ideas in ways that are more intuitive and accessible and create spaces for community and shared reflection.

We sat down with Sekai to learn a bit more about her background, and where her interest in this project came from.

That interest came from my own experience. I don’t come from a religious family. My grandparents are not religious at all, which is very unusual for an African family. My family’s religion, I would say, is liberation politics. But as a teenager, my mum became a Seventh Day Adventist so I was brought up in that setting on and off. The church was quite conservative but due to my mum’s activist background she always spoke up, pushed back in Church. She was able to use the Bible to support her arguments especially in terms of how her gay friends were treated there.

But this tension made me feel uncomfortable, I wanted church to feel warm and welcoming – not a fight every Saturday. When I was a teenager, I found a local Church of England church which I really liked. There were lots of artists and creatives there and queer people were celebrated and accepted. I was like, Oh, my God, I think I found my people – amazing! But I found that whilst they may have been better with queer issues when it came to really challenging white supremacy and their own middle and up class privileg – there was a limit. It felt like they were saying we’ve done our hard work and accepting gay people – this extra stuff is too much. Because of that, I couldn’t continue there, especially as I would lead services and was part of the board. I didn’t want to be their Black face up front, giving the false notion that everything was great when I knew it wasn’t wholly safe.

My faith has never been in question though, I never wonder if I believe in God, that I know to be true. It’s more that I never seem to be able to find an institution that I’m actually politically aligned with. Especially as my faith sits more within a framework of Black liberation theology which isn’t easy to find here in the Netherlands or the UK.

When I did my masters here in the Netherlands, my graduation show was also surrounding the stigma of religion in the art academy, and creating spaces of safety for Black faith. We used the ritual of foot washing from the Adventists, we did a subverted Bible reading to put it in a contemporary perspective. So my work is always concerned with creating these new rituals, safe spaces and a sense of Blackness that is queer affirming.

In your residency, I feel like there is an essence of spirituality in it. So I'm curious if you feel like your research around spirituality has also maybe influenced the way that you are organising this residency?

I wouldn’t say the starting point was spirituality, but instead my own painful periods. It was a medical -issue, I realised  doctors didn’t recognise my pain. They told me that it’s normal. But my body was like… this can’t be normal. I explored holistic avenues, but that seemed to mostly be white, middle class women doing womb circles and it didn’t really speak to me.

My exploration of fibroids, pain, endometriosis and intergenerational trauma made me understand that this entire area is such a sacred space. This pain has to be connected to something other than just biology, or hormonal imbalances, or growths. What does it mean to come from people who have been historically enslaved, colonised, raped, murdered? How has life been carried forward from that space? How has the womb space been a site of trauma and therefore, how might pain show up there, if it hasn’t been processed or dealt with?

And I’m not saying this as someone who has all the answers, or who has perfect periods. I’m definitely on a journey myself. But I always think that as Black people, or people of colour in general, our power lies in community so how can we explore this together?

So spirituality wasn’t the entry point, but it’s definitely an element that I’m really interested in exploring to see what comes up for the group. I’m also aware that there might be people who might be resistant to that, who might want to take a more purely body based approach. But I do think the trauma element and the link to spirituality is important. 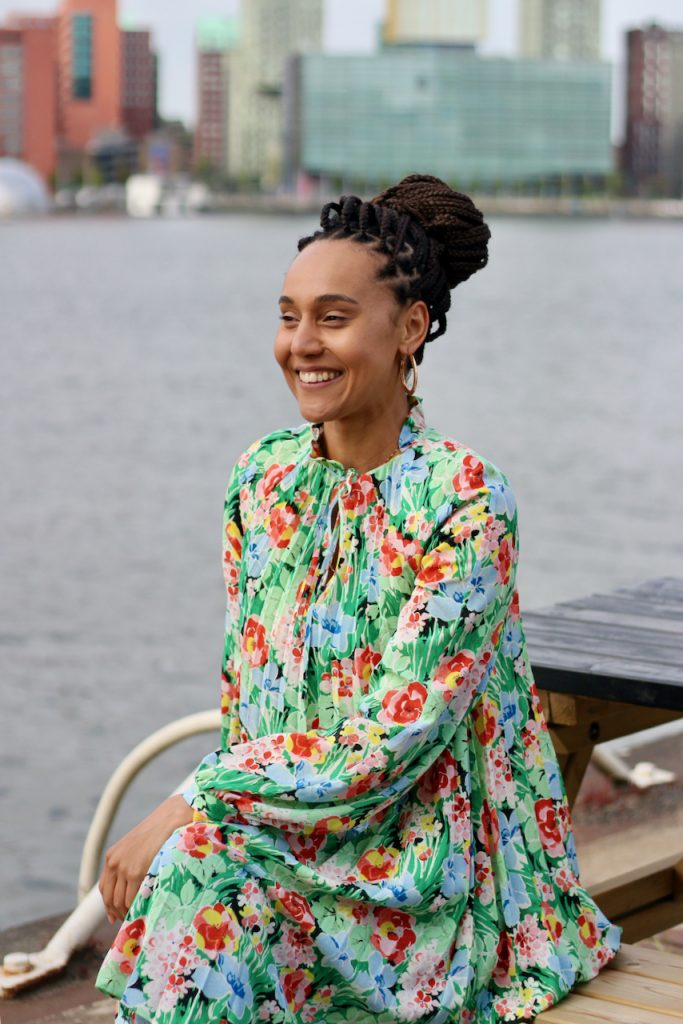 Yeah, definitely. You were also talking about the relationship between Blackness, pain, and trauma. So how do you understand this connection? And how will you explore it in the residency?

Well, I feel like Black people are always denied our pain. Being told that it’s not real, it doesn’t exist, it’s not that bad. And from the medical perspective there’s this whole bias, well just racism, where many doctors subconsciously imagine that Black bodies can endure more pain. That they don’t need as much pain relief, that they are stronger bodies. All of these ideas.

Also, just reflecting on my friends’ experiences…. Black women who’ve had babies in the UK… that was actually more my entry point. I haven’t had children, I haven’t experienced that. But I was very interested and worried about Black maternal health. And before we get to Black pregnancy and birth, periods are such an important health indicator.

You can’t control doctors who might not give you pain medication, who don’t see your pain. Doctors told me my pain was normal even though I had fainted before from it. I was like, but this doesn’t feel normal. It felt like medical institutions were not going to help me, and so I had to look elsewhere to figure out some of the root causes, and try to heal.

I think for a lot of Black people in terms of our survival, we’ve had to just get on with it even though it’s painful. And maybe on a subconscious level, we internalise or normalise pain. This residency is me saying no to that.  We can choose something different. We can choose joy, we can choose ease, we can have a different reality. It takes radical imagination and a commitment to go on a journey to enter something together.

There’s pain in many other areas of Black life, but I really wanted to centre bleeding bodies in this residency, menstruating bodies, because I don’t hear many people talking about that. And there’s so many layers to it, especially because it’s quite a private thing. It can be a shameful thing, something we’re embarrassed about, that we’re not taught to celebrate. And so now we can create space, and have a healthier relationship with that moment of our cycles.

Very beautifully said. I also know that in your description, you talked about celebrating and unearthing African and Caribbean practices. Do you have some of your own favorite practices that you use now?

That’s the sad thing. I saw that question, and I thought I wish I did. My mother’s family is from Zimbabwe; that’s the family that raised me. I grew up in the UK. And the women in my family have always had difficult periods. And this is also the issue, right? If you grow up in a family where everyone’s periods are painful, everyone thinks it’s “normal.”

I can’t say that I know about these traditional herbs, or things that we use in Zimbabwe. They might exist, I don’t have access to them because of the diaspora, migration, colonialism etc and because I live in Europe. And I think that’s really sad. I would like to know more. And maybe I can learn through this project, not necessarily Zimbabwean approaches, but other African diasporic approaches. You know, what are the approaches of Moroccan women, of women in the Caribbean, of people that live in Ghana? I’m really open and excited about those possibilities.

Yeah, I'm also excited to hear and explore and learn as well within the residency.

So who have been some artists or writers or thinkers or maybe even friends who have influenced this project?

Well, your classics, a bit of bell hooks, a bit of Audrey Lorde, Patricia Hill Collins, Mellisa Harris Perry, Brittany Cooper I could go on! But Black Feminist thought is central to most of my practice. And their writing is often about lived experience, and resisting notions of what Black life is or should be. So in a very broad sense, I’d say unapologetic Black feminist thinkers really influence my work.

In terms of the specifics of Black people and periods, I think my entry point, again, was Black maternal health and the alarming rates of maternal death in the UK.  There’s a campaign called FIVE X MORE and it says that basically, Black people are five times more likely to die in childbirth in the UK, that’s even more than in the US.

I suppose my entrance into period health was actually through maternal health, and through my friends’ deeply challenging birth experiences. Not just one but multiple people. The Black women in my life have had unspeakable things happen and that fills me with rage. Another inspiration has been Kelechi Okafor, who is based in the UK.On some episodes of her podcast Say Your Mind she speaks candidly about her experiences in UK hospitals, and the ways in which Black people are not treated well – at all. So just hearing a lot of Black people and specifically Black women, speak out on this issue inspired me.

Last question: What do you hope that participants and audience members will get out of the period residency?

I hope that they will have a really positive experience engaging with other Black people who might have challenging periods. So at the minimum, you would feel less alone. I hope that we get to hear from lots of different perspectives, people who do acupuncture, massage, dance, and just open up different possibilities of what healing could look like.

With the monthly radio show, and the zine, and potentially the exhibition, I hope that people are able to kind of put a face or a voice to Black people’s pain around menstrual health. Even if you’re not a Black person, you might have challenging periods. Or you’ve never even thought about this, maybe it’s never come on your radar. I pray that it helps people and is transformative, and feels good. And as always the aim in all of my work and interactions is I want us to feel good together and tell the truth.

Register for the Period. Residency here.