Fons Burger is a journalist, writer and activist entrepreneur. He’s also WORM’s landlord(!). He has a background in journalism and activism working with the likes of well known Dutch journalist Derk Sauer. In 1987 he started the music café Rotown and in 1988, he helped set up the city’s infamous venue, Nighttown. Burger is also involved with other projects in the cultural sector, on behalf of the municipality of Rotterdam. He is the landlord of more than ten local art institutions and venues, including the Scapino Ballet, Stichting WORM and V2, Institute for Unstable Media. As WORM is currently installing new solar panels on the roof, we asked him about a venture that guides his life; sustainability. 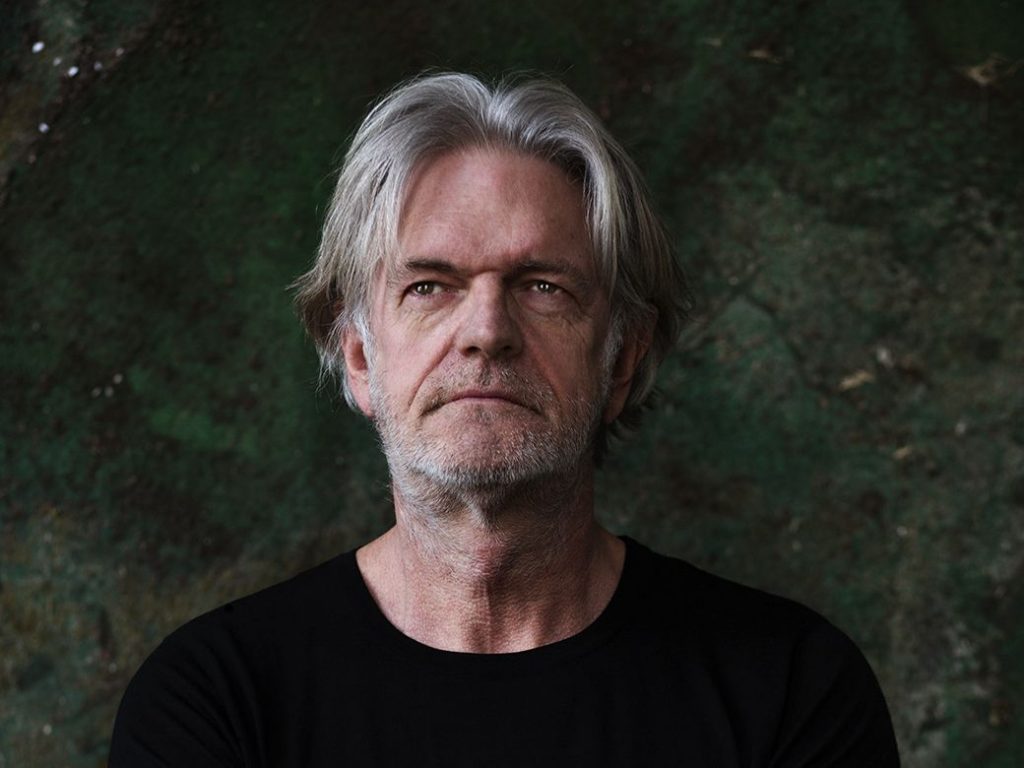 WORM: Fons, tell us about your work.
FB: I have worked in sustainability, fair trade and property in the Third World for nearly 50 years. I started in the cultural real estate business. Back then, it wasn’t seen as that important to work with alternative energy sources or forms of isolation. I began to get involved about 10 years ago when I bought a house in Spain, and my house was so remote from the village that there was no available electricity, gas, water or sewage facilities. So I was forced to build a stand-alone house and, given my ideals about how the world should be, this was an interesting thing to do.

…That’s why I was very glad when I heard about the ways of thinking and working WORM had in mind for my building a decade ago. So, it was a click. And we started construction.

WORM: How did you come into contact with WORM?
FB: That was a long time ago! Let’s say everybody knows WORM in Rotterdam. One day WORM needed to leave their premises in the Piet Hein neighbourhood. And they knew of the departure of one of the big tenants here [on the Witte de Withstraat]; the Museum of Photography, which is now on the Wilhelmina Kade. So the Museum left and I had a lot of space on my hands. Now, WORM were interested in going to the city centre. Of course they had a lot of ambitions, including doing more construction work. And they wanted to find a place to do that. So they just rang me up and I thought, wow, good idea, let’s go and talk about it. So that’s how it started!

…That was 2012, and involved the work from Super Use Studios and designs from Joep Van Lieshout. And there was a lot of fanfare about that back then.

WORM: How do you feel about that story jumping into a new time? Progressing that relationship with your ideals in mind? As we speak we are putting solar panels on the roof.
FB: I had some talks with Janpier [Brands] and the others about how we could make the building more sustainable, self-sufficient and ultimately CO2 neutral. And actually in the beginning we had a joint plan to do so. As far as I know, for WORM’s part, they had to ask for a subsidy. In the meantime I financed the situation with the energy, and just got on with that. I know WORM is very glad because they have a building that has not only got a strong heritage with Super Use but it will also be, in terms of energy going forward, very progressive.

…It’s a very progressive thing we are doing! Currently, the building gets its heating from the centrale stadsverwarming [city heating supply], but the problem is that (as far as I know), the council works with heat taken from the factories on the Maasvlakte, and there’s not enough heat generated there. I heard rumours about this. I still have to find out if this is really true or not, but I heard they use the garbage they collect from Rotterdam and burn the waste material. I believe another environmentally unfriendly element of stadsverwarming is that they have to transport this heat from maybe 10, 20 miles away, so they lose maybe 25% of the heat.

WORM: Do these things feel infuriating?
FB: There are always these contradictions to setting out a sustainability policy. Individuals and institutions really want to do better, but then you run up against the mechanics of civic or national government. Then there is this “complicated dance” [laughs]. 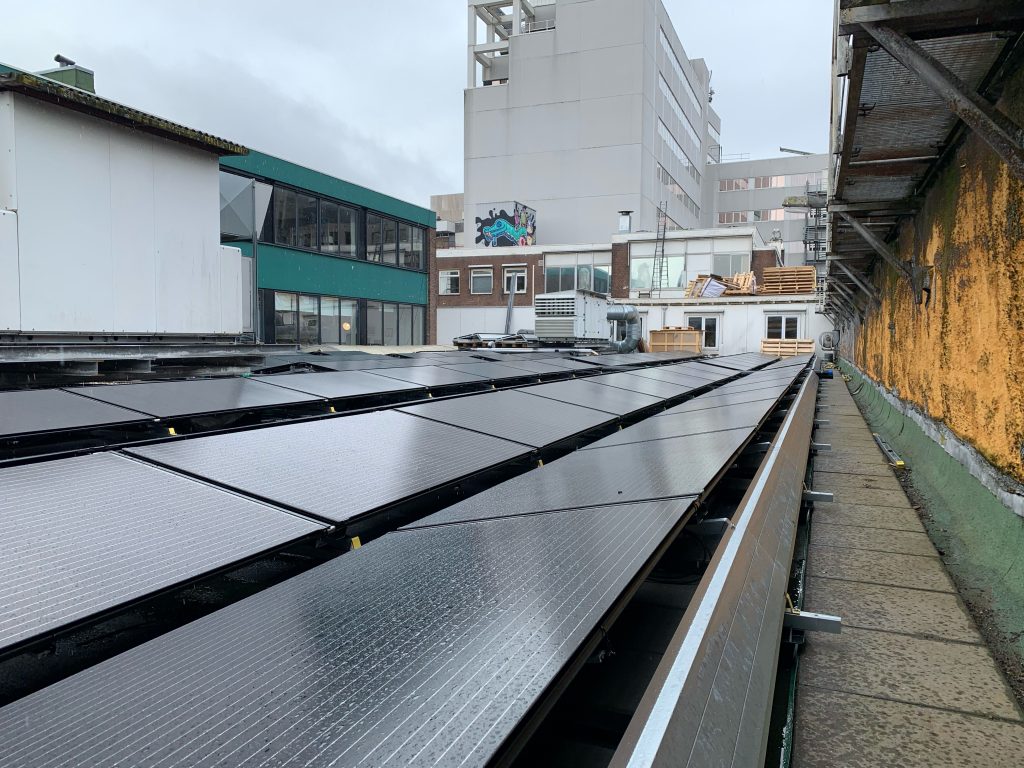 WORM: Do you feel you have to prop up sustainability policies that aren’t perfect; allowing them in the hope things get better?
FB: I believe that in this period of energy transition we are in now, we should do as much as we can to diminish as much gas and oil and other possible [unsustainable energy] sources. I also oppose nuclear energy. I don’t think that is a solution for the long term future. And of course the stadsverwarming is a “circular use” of warmth. But if they have an oven and start burning household waste that should be recycled, then it’s really a big problem. You have to remember, these buildings [on the Witte de Withstraat], are just examples. What I am doing on the roof is just an example of how you can transform an old building that has single glazing and a lot of heat loss. We call it a koude brugge. The place also needs a lot of electricity. We are working with Green Choice which is one of the most sustainable and renewable energy companies that I know. But as I said we are just an example

WORM: Tell us about the panels
FB: Well, to be more precise, we are not just putting solar panels on the roof. These panels are the latest innovations in solar panel technology, they are hybrid panels called PVT; look it up, it is very interesting. They get around the need for the use of a heat pump. You need less energy; it’s actually a replacement for drilling into the earth. If you look at systems with heat pumps there are two kinds. One gets its energy out of the air, the other out of the earth, employing a drilling of 120 metres’ depth. And so these panels actually replace a problem you have in a big city – that you can’t drill anywhere. If you have a big roof, you just put these panels up and you have the same effect as getting your heat out of the ground.

WORM: I hope it works!
FB: Me too! I think we are the second big project. There is a school building in Haarlem where they also do this. Actually this is a big innovation and we are making a documentary about it, seeing if the system will work or not. And also the panels are PV, meaning they are hybrid; they are delivering about 390 kilowatt hours’ worth of energy, which is very high.

…We are also looking to use rainwater to flush the toilets in WORM, but this is still on the drawing board. So for now, we’ll try to find all the single glazing and heat loss spots and we are working on a management system for the heat. For instance, software where we can control the temperature. And then there are plans to replace all the old lights in the complex with LED lights. WORM is very advanced with this, because they use LED, except for the theatre, [UBIK] where they work with the recycled Scapino lighting. 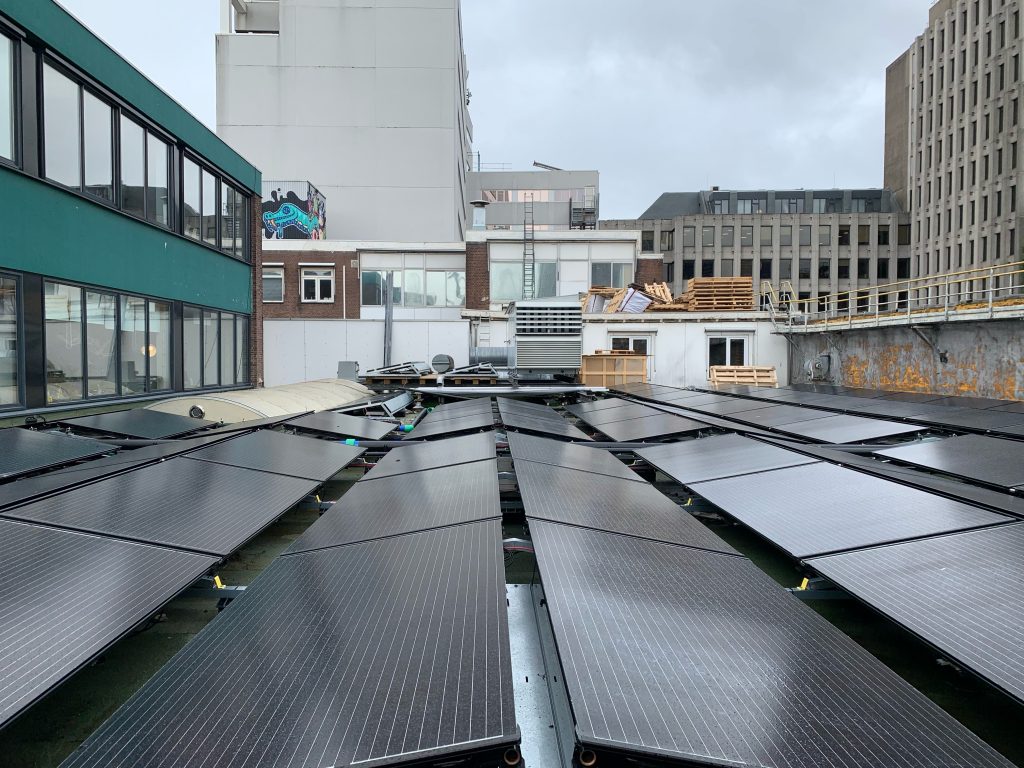 WORM: How do you keep tabs on all of this, Fons? And any plans for the future?
FB: All these projects are worked out together with the tenants. There is the social side of it. But of course we have a political problem. We have a very progressive local government but they are scared because the biggest party is Leefbaar Rotterdam. I was working with another organisation on a big festival, and a conference on sustainability in 2020. I had to stop it because most civil servants were very cooperative but then at a certain point they said, “we stop this because we think we will have an issue.” Because I was a political risk apparently! It’s true that in the past 30 years, whilst living in Rotterdam, I have never shut my mouth [laughs] and that’s not always been welcome. So there is a lot of good intent and we have a progressive local government but there is not much happening, I feel.