WORM has always attracted me. Maybe it’s the idea of tuning into this unruly entity which always seems to operate just out of sight, making and informing Rotterdam’s psyche. Regardless, it was always a place that was different to the rest of the Dutch popular music circuit, which I’ve been reporting on since 2003. I remember visiting the murky but friendly Delftshaven address quite a few times, once, memorably for a wild Rats on Rafts show (I think for the release of the Money Man single), and watching an eye-watering cartoon take on Tarkovsky’s Stalker. Then there was a time when the notorious German cabaret artiste Rummelsnuff shared a fish with me, which was surreal to say the least. WORM was and is a place like no other, wherever it finds itself in Roffa, as anyone who has gone to the the annual Ver Uit De Maat festival will appreciate.

One week and night stands out though; the residency and gig with the French rock band, Les Harry’s back in 2016. Les Harry’s are a special bunch, comprising of a number of lads who attend the St. Antony daycare centre in Paris. All have severe autism, and create and play music as part of their therapy. As a band, Les Harry’s have made one absolutely killer LP to date, GGOTS, which comes on like Can’s Tago Mago. I wrote about it for The Quietus and you really should check it out. The residency was – if memory serves – organised in conjunction with Lukas Simonis (who was pals with Frank from the label Sonic Protest who’d released the LP, and was on the tour as mentor-cum-factotum) and Rotterdam-based musicians such as Yuri Landman and Janneke de Putten.

Obviously this was no normal residency. And when the lads from Les Harry’s turned up at Boomgaardsstraat there were only two questions WORM had to answer. Firstly, where were the toilets? And secondly, had we got the peanut butter?

Peanut butter was essential. And in the best Rock Tradition we hadn’t asked why. We just stocked up, no questions asked. It was worth it: to see the lads’ faces as they walked in and clocked WORM’s (admittedly weird) toilets (you know those sump tanks that look like the pod Derek Smalls gets stuck in, in the movie Spinal Tap), and a row of gleaming jars full of peanut butter, was a beautiful moment. Cries of joy. Dancing. Hugs. Beautiful.

The residency went on pretty well but the gig was magical. There was a great prequel too, which somehow became a visual metaphor for the gap in headspace between WORM and the shiny happy NL Music Bizz. The night before we hosted a couple of nice and prim (and very unWORM-like) Amsterdam bands, who were used to things “just so”. When two of the lads from Les Harry’s, Sammy and Nicolas* jumped up on the stage and started to run on the spot shrieking and counting in French, there was mild consternation. “Erm dude are you supposed to do that?” Some of the audience shuffled head down and nervously fingered their tote bags.WORM staff let it run its course as part of the experience.

Come the following night, the actual gig was packed. The lads had somehow found the crazy “smiley” sunglasses at WORM (which you couldn’t see through) and, to a man, were wearing them. I wrote about the night at length here (which does set out a number of reservations I felt at the time) but two things still stand out; Sammy’s manic rap wearing the glasses and the drummer who linked the beat into his breathing. Which of course led to a series of subtle shifts in pace and tone, and the odd moment of mild confusion. Afterwards there was a hell of a lot of dancing. It was one of the most remarkable shows I have ever seen.

The next day, whilst the band loaded up fresh peanut butter in readiness for the journey back to France, I found something on my desk. A GGOTS CD with a drawing of Jerusalem on it, by David. I like to think that I own Jerusalem, and in doing so maybe hold the key to world peace.

(*I think it was Nicolas, I know the other was definitely  the irrepressible Sammy) 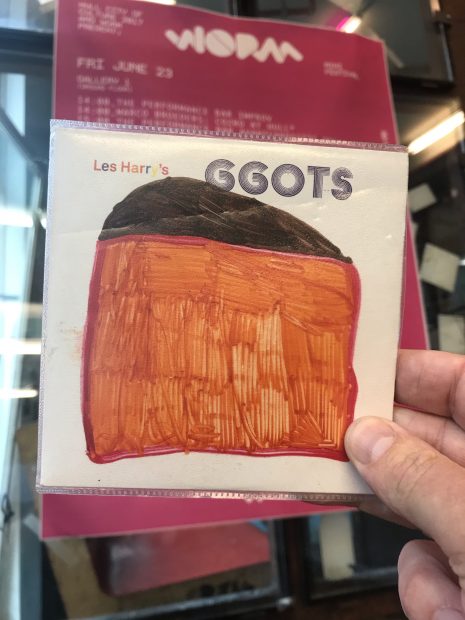