WORM is interested in seeing artists transform. Creating new things from the smallest idea, from a chance meeting, a throwaway remark, a post on Instagram maybe. And one of our core goals, indeed one of our great pleasures, is to open our archives and resources to those who want to challenge themselves in a new discipline. One of the main focuses of WORM’s Open City phase is to focus on artistic and socio-cultural boundaries, and how artists and creatives can reshape them into something new, and fruitful.

Kate Shilonosova is a remarkable artist. Known primarily for her pop “alter-ego”, Kate NV, she also fronts the truly brilliant Moscow rock band ГШ (Glintshake) and is a member of the Moscow Scratch Orchestra. She is an internationally celebrated artist who works in a number of disciplines, but during an interview with WORM’s Richard Foster at Tallinn Music Week she hinted that she’d like to understand how her passion for dance could further inform her music.

Kate: “I always loved dancing but I’m not a professional dancer and usually when I perform it’s always a very stressful thing for me. Every time. It doesn’t really matter if I’m performing for one or two people or a very big crowd. I’m always very nervous and I cannot control my hands or my arms! […] For me the biggest goal during the performance is just to relax and not just have fun but let my body move the way it wants to move. I’m still working on that point and I am pretty sure that once I get that it is going to be really cool. At least for me.”

This confession stuck in WORM’s head. And – as these things often do – a chance to do something about it presented itself out of the blue. WORM heard that Le Guess Who? festival had booked Kate to perform at the 2018 edition. A quick chat with Le Guess Who? led to WORM offering Kate a week residency in our theatre space, UBIK.

The most important task was to find a dancing partner who could draw Kate’s ideas out into the open. A few mails between Kate and WORM led to choreographer, visual artist, (and WORM friend) Dario Tortorelli of DIVEinD stepping into the breach. DIVEinD was founded by Dario with the aim to push traditional boundaries of dance creation, performance, and visual arts. As Dario states: ” In a society in which we live and work more and more in our heads, it is becoming increasingly important to keep a focus on the body. The dance contributes to this.”

Working with a musician such as Kate could lead to fresh challenges. After the residency we asked Dario his thoughts on how he felt things had gone.

Dario: “It was a sweet and gentle encounter for me. Kate is a very kind and inspiring person. I could tell that there are many things going on in her head, but I could not always tell what she was feeling.
During the three sessions we had, I mostly focused on making her aware of her body. Basic things like standing, or where the weight of the body is going while walking, for example. Which part of the body we use to walk or when we change our rhythm, or isolating directions of the body from where we look, in relation to space. Awareness of ourselves in space and what surrounds us.

We watched some of the dance videos she is inspired by for a future idea of a choreography for a video clip. We watched a choreography from Maurice Bejart of ‘Bolero’, first danced by Maya Plisetskaya. But when I showed her the male version, with Jorge Donn, she liked it even more. We had a spotlight in mind as a prop, and thought about repetition, sign language, vogue vogue, Sayonara. It all concluded with the thought that her new music video should be a combination of Bolero, Voguing poses and Geisha dance gestures.

In the end, we didn’t really create a choreography, only a short phrase so we mostly shared experiences. There was not enough time to do that but for sure time to introduce each other from our different but not so different worlds.

Kate is not a dancer, but secretly – okay not so secretly – I think she dreams to be able to do much more with her creative mind, and translate it into a more specific body language to use in her work. To do so she needs more tools and I hope I could give her a few.

Overall I think she was comfortable to have me around, the last day we talked a lot and we were also singing fun pop songs while reflecting on the space and installation she would improvise in on that same evening. It was nice to observe her prepare, reflect together on her performance, getting a bit nervous beforehand, but still looking calm and cool, like a Russian Sailor Moon! 🙂 ” 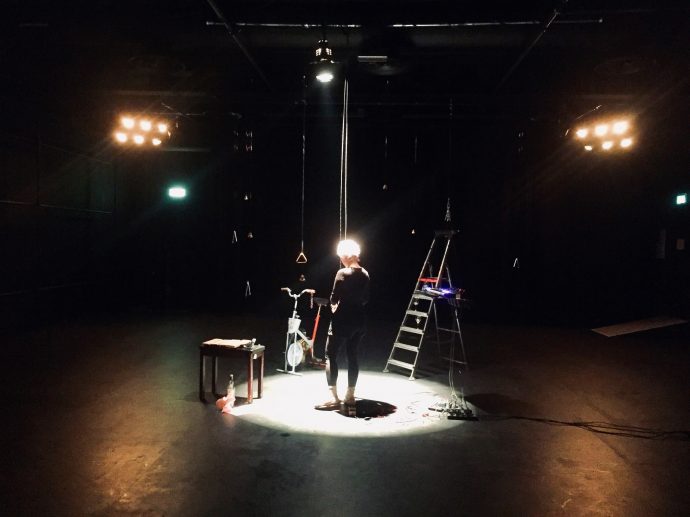 для FOR “in action”

What is also worth noting is the extreme time schedule Kate juggled during this week. It’s instructive to note how an artist works when they reach a particular level of success; basically there is no time off. On the back of Le Guess Who? (itself two performances in a day), a gig in Denmark, and then a week at UBIK, Kate also – somehow – incorporated evening rehearsals in Amsterdam for a live film score at the Pathé Tuschinski the following week. This was bookended by other gigs in Amsterdam and a further residency at a sound studio in den Bosch.

WORM waited until the night itself to announce the Kate’s performance: still 60 or so adventurous souls trooped into UBIK’s black hole. The performance – which you can watch in the trailer and full film (coming soon) – was soundtracked by an interpretation from her latest solo LP, для FOR (available from the RVNG Intl. label.

Kate can go on record as the first person to use the exercise bike in a performance – frankly we were wondering when someone would actually use that thing. Kate, however, is a keen cyclist and somehow her interpretation fitted beautifully into her cloudless experimental pop. It’s worth noting that the squeaks of the bike chain at the end were not planned, but as is often the way, added a surprising dimension to the sound, which Kate quickly and cannily exploited.

Thanks are due to Le Guess Who?, RVNG Intl., Dario Tortorelli of DIVEinD, Futura Artists, Davids and Thijs at MINT. And last but not least, to Kate Shilonosova.