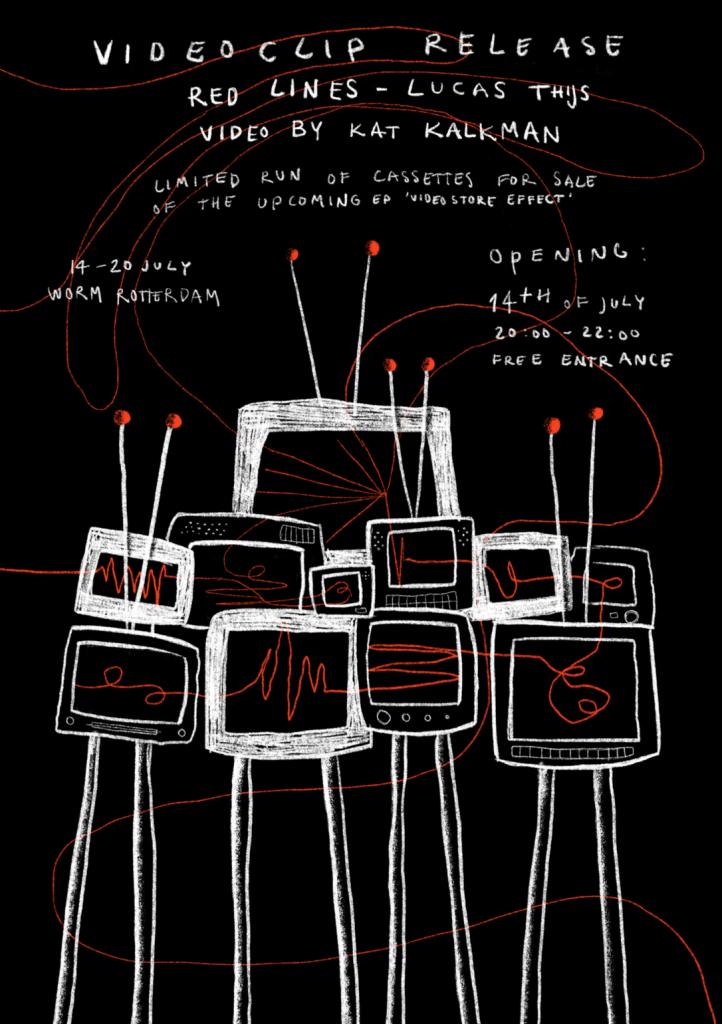 Lucas Thijs invites you to join his video clip release for his newest single “Red Lines”, created by Kat Kalkman. This totally indie production will be shown for a week in WORM’s TV installation built by Roel Weerdenburg. During the two hour gathering there will be a limited run of cassettes for sale of the upcoming EP “videostore effect”. In the company of some drinks there is an opportunity to listen to the cassette right away!

The installation with the video clip will be available till the 20th of July, feel free to swing by #Wunderbar and check the work 🙂

Follow up for the digital release on the 29th of July. More info here: https://linktr.ee/lucasthijs
Insta link: https://www.instagram.com/lucasthijs/

Bio of the artist:

Indie songwriter, producer, multi-instrumentalist, Rotterdam based Lucas Thijs debuted in 2018 with his self-produced indie “Backspace”. In 2020, Lucas released his single “Never Had It Anyway”, a collaboration with Igor Wouters (Amsterdam Recording Company) that resulted in a sound that leaned more towards alternative-rock.

After spending his early twenties working as a session musician in multiple projects, Thijs began shifting his focus away from projects that wouldn’t fulfil creatively. While being a guitar player in Rotterdam based post-punkband Paterson, he simultaneously kept working on his solo music. Inspired by the earlier work of John Frusciante and Ellioth Smith he recorded his latest release Escapology using an 8 track Tascam cassette-recorder, a vintage Neumann U67 and some of his first ever Casio keyboards. With upfront doubled vocals, in your face lyrics in a landscape of dreamy synthesisers and softly strummed acoustic guitar, Escapology is Thijs’ most intimate release to date.