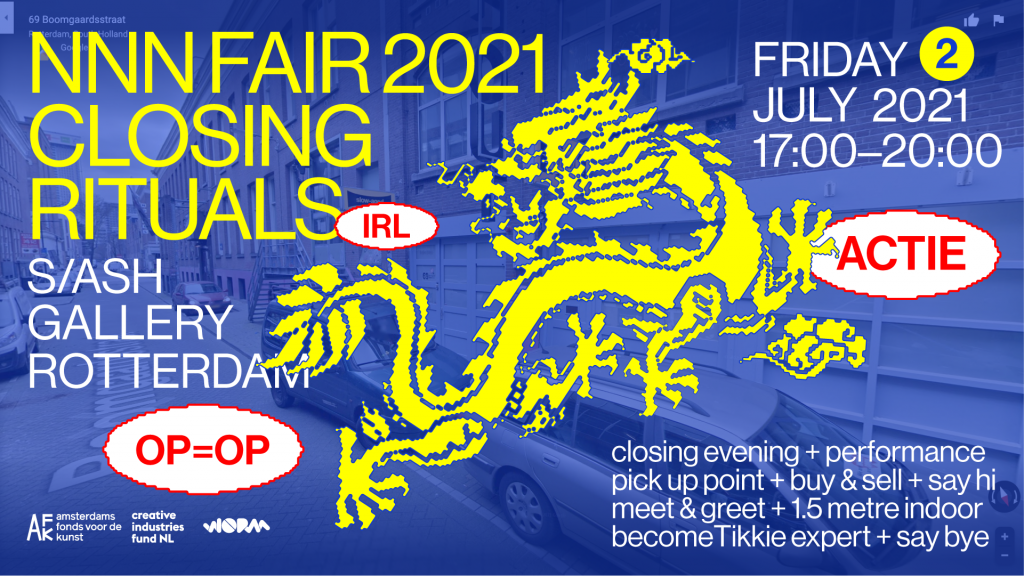 With the reopening of cultural venues, the NON NATIVE NATIVE FAIR 2021 will now end with a special note. During this evening, we will announce the winning bid of the NNN24 Siam Protective Powers auction by Irene Stengs and end with a closing ritual performance by Kwinnie Lê. During the NNN FAIR, Kwinnie presented Văn Lang — reparations to the land of the tattooed. (NNN28) The performance will begin at 18:00.

Growing up, Kwinnie Lê had been taught by her family that tattoos are taboo and belonged to criminals only. When she started mapping the colonial histories behind tattooing, she made a great discovery. The ancient Vietnamese used to go by Văn Lang, meaning “the land of the tattooed”. As the name suggests, everybody was covered in tattoos from head to toe. It was used as a way to harmonise with nature, to provide healing and sacred protection, among others. The tattooing practices by the Vietnamese started being erased by the 4th Chinese occupation [Ming occupation] and became truly criminalised by French colonialism, who forcefully coded prisoners. Similar histories of the erasure of tattooing can be found across cultures. The tattooing that we know of in the West has its roots and influences from traditional tattooing. Yet, it has stripped away elements that have been crucial in ancient tattooing rituals, from its use for sacred protection to the importance of the rhythm of tattooing. Văn Lang is a performance that works towards the reparation of tattooing.

The Siamese monk Somdet To (full name: Somdet Phra Putthachan – To Phrom Rangsi, 1788–1872) is still widely venerated in present-day Thailand. The monk is famous for his rediscovery of a powerful Sanskrit prayer (khatha), named the Phra Khatha Chinnapanchon, somewhere, as the story goes, in a cave while meditating. Hence, the monk is always depicted with the khatha. Reciting the khatha evokes an auspicious, protective power (saksit). Somdet To, and everything related to him, is saksit. Irene Stengs learned about Somdet To through her research on the veneration for King Chulalongkorn (Rama V; 1853–1910): it is widely believed that Somdet To had been the Buddhist teacher of the young prince Chulalongkorn.

The three items to be auctioned came to Irene in The Netherlands after her research had ended. The money raised from the auctions will be donated to Buddhavihara Temple Amsterdam. The auction will end on Friday 2 July at 18:00.

NON NATIVE NATIVE FAIR is an experimental hybrid event that brings together Asian creative cultural practitioners from various backgrounds and disciplines to present their work and products in an online trade fair environment. By repurposing the concept of an “Asian cultural fair” — a collage of elements which represent Asian culture — the NNN Fair examines the positions and relationships of Aliens within the Dutch cultural landscape by blurring the boundaries between reality and fiction, appreciation and appropriation, labour and play.

Participants are invited to sell their products and share the ideas behind their projects. The projects range from zines to merchs to swords to dumplings to time to crowdfunding future projects. The products will be sold online on nnnfair.com with all proceeds going directly to the artists. The presentation will take place over the livestreaming weekend and will be played on loop online for the rest of the week. The participants are encouraged to give out promo codes during their presentation (such as subliminal messages, quizzes, keywords) which can be used to add value to the purchase, for example, thank you messages, signed editions, free gifts etc. This additional element is included as an incentive to pay attention to the presentations.

NON NATIVE NATIVE (NNN) is a cultural platform which looks into the Asian creative landscape in The Netherlands through the lens of the outsiders from within. The platform serves as an alternative point of exchange for critical creative practitioners between the Asian and Dutch cultural landscape with the focus on contemporary visual culture. The initiative was formed in late 2018, and through a series of research and public activities, we aim to combine the contemporary work of Asian creatives with the local diaspora narratives, bringing to the surface a nuanced representation of Asian visibility in popular culture. We aim to construct an alternative speculation–or rather–impression on the world’s future, through critical reflection of Asian actors who are part of the global cultural landscape.

Non Native Native is co-founded by designers and curators: Belle Phromchanya, Darunee Terdtoontaveedej, and Honey Kraiwee, and operates in collaboration with diverse professionals to celebrate the art of reclaiming the unclaimed.