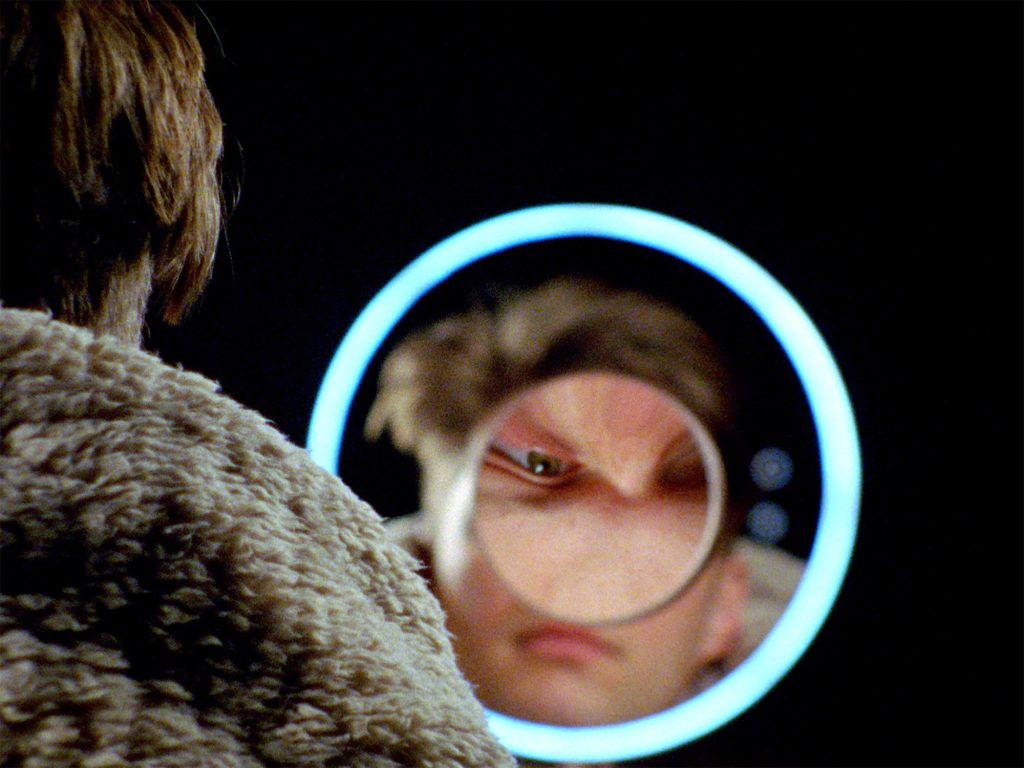 The filmmakers share an interest in working at the edges between experimental technique, observation, and narrative form, shooting primarily on 16mm film to produce moments that are strangely intimate, disquieting, and suffused with fantasy and longing. From the non-places of public life to corporate architectures to domestic interiors, their work touches upon late-capitalist surfaces of desire, attuned to ways in which different contemporary environments resonate with complex feeling and collective experience.

OCEAN HILL DRIVE examines a rare phenomenon, the so-called ‚shadowflicker’, that occurs in a suburban area on the outskirts of Boston. As a result of an erroneously installed wind turbine, the flicker effect, which brings to mind structuralist experimental cinema , appears instead in documentary images showing the landscape and architecture of a Massachusetts coast town.The film focuses on the visual quality of the pulsating shadows that intrude the suburban domestic sphere and disrupt the social and psychological equilibrium of the community. Documentary images are complemented with a female voiceover, which is based on multiple interviews that were transcripted and assembled into a single narration. The film slowly uncovers fragmentary memories from the time when the flicker began. An atmosphere of suspense and intangible fear is generated throughout the film, while the actual source of the flickering lights remains unknown.

DESERT MIRACLES is a cinematic exploration of a commercialized architecture of desire. Across 22 different tableaus the film meditates upon the interiors of Nevada’s wedding chapels, considering how the excessive scenery opens up to constitute a cultural organisation of “Love”. A woman’s’ voice is heard reading out an ambiguous letter to an unknown lover in which she finds herself troubled by the challenges of modern relationships, unable to negotiate a balance between self-fulfillment and optimization. The text is based on anonymous posts by different women in various internet wedding forums. One fictional female character is composed out of many assembled perspectives on desire, relationships and social expectation.

The music video CHINA LIGHT is a cooperative project between artist duo Gossing/Sieckmann, editor and VFX artist Nicole Wegner, and the noise musician GUAN from Peking, China. Filmed documentary style on 16mm analog film at a recreation of a traditional Chinese light festival in the Zoological Gardens of Cologne, Germany, the video takes images and surfaces of an exoticised western view on Chinese culture and merges them into a vivid trip. Blurring and shifting into a frenzy state of perception the film shows us an aestheticized uncanny wilderness becoming an ecstasy of colors and shapes. Ghosts of animals, animated lifeforms and unnatural plants arise and drone to the ambient and otherworldly sounds of Guan.

A portrait of the urban residential development as it slips into oblivion.
“In a place where everything seems to happen on the surface, this film takes us deep into the infrastructures of desire on which our present moment is built. This is where humans andobjects coexist in an uncanny state of interdependence, touching, penetrating and animating each other. Where possession is just another name for the loss we experience, for the void we leave behind when we move on.”
– Katrin Mundt, 25 FPS jury

A shifting in the light of the lot, where parked cars become containers for a collective estrangement.
“The car in Epcar’s ballad never hits the road. Instead, it is used like a petri dish, glassy and stiff. The car in the lot pretends it’s a forcefield, but ultimately, we know that we can’t live here forever. We can tamp down our anxieties about the worlds of work, the exterior, the natural, but this reprieve, baking in sunlight, is untenably hot, ultimately temporary.”
– Jury of the 29th Onion City Experimental Film + Video Festival

A constellation of objects, each emerging into the soft peach-light void of an indeterminate condominium space.
“Subjecting our visual (and virtual) lexicon of luxury to a series of sculptural and kinetic interventions, the film evokes a crazed anthropologist’s observations of a bizarre cargo cult — our own. The climactic vision… is typical of Epcar’s exuberant play with meaning: the commodity pulverized, reconstituted as a new order of objet d’art, and finally relinquished to the rude flow of cinema.” – Max Goldberg