I walked from Beurs to WORM. I was a bit nervous because I am one of the people that stays mostly at home. As many of my immediate family members are in the high risk group, I really don’t want to be a contributor to the mess that covid-19 is.

At the entrance, I was greeted by a “door bitch”, as named in Harmen’s call sheet, that I read the day before.  I am a film producer myself, so I have an odd fascination with call sheets and I am one of the few people who actually bother to read them. The door bitch is what we would normally call a covid host at WORM. Somebody who checks if you are wearing a mask, if you have any symptoms and all that jazz. This time Virgil Westhout was on shift. He is one of our main bar crew members who was currently deployed to do other tasks such as this one.

The space of UBIK is really just a black canvas which can be transformed into anything.
Well, Harmen transformed it into a full-blown photoshoot. UBIK was filled with music and glamour. To a backdrop of 90s tunes from the likes of Madonna and Destiny’s Child I saw people dancing, giggling, coquetting and beating their faces for the gods. Harmen had separated the space into few stations. A makeup and hair station which was on the left. There, specialists Ed Tijsen (@edtijsen) & Minou Meijers (@minoumeijers) transformed the talents into their true selves. The next station is what we in film call “the crafty”, where people get snacks, beverages and most importantly fresh coffee. Because god knows during a long shooting day coffee is a key to a happy crew! The next area was under the reign of up-and-coming fashion stylist, Yvana Muradin. She reached out to the new generation of Netherlands based designers to assemble all the looks for the photoshoot.

All the models that Harmen was shooting today answered an open call which we sent out a month prior. In their submissions, they were to share their wild fantasies on how they want to be captured. When the call closed Yvana, Minou, Ed were in contact with the models to get a better understanding of their vision and together they assembled amazing unique custom looks which the models were wearing today.

At the centre of this mini fab universe is situated the shooting station. In front of a white backdrop was Dominique. She was wearing a romantic white gown. She had painted an intricate ram skull at the centre of her face and her eyes were pitch black thanks to the extravagant lenses she was wearing. Dominique has the time to transform herself only once a month because this makeup ritual takes between 5 and 7 hours to prepare. Opposite to her, behind a camera was Harmen, nurturing and encouraging her poses while the flash was casting a stroboscopic effect on her every time he photographed. Meanwhile, dedicated camera and style assistants were buzzing around the set. Fixing a wrinkle in the clothes, a strand of hair, or taking snaps for the ‘gram. All of that was done brilliantly, and in a rhythm in full accordance with the new covid-19 regulations.

Looking around, trying to orient myself in these subcultural worlds unfolding before my eyes I could distinguish who was sharing fantasies, who came as a duo or a trio and who was here to be shot individually. Next to a table strewn with jewellery, feathers, stones and latex accessories stood three friends. They were slaying coordinated figure-hugging sheer outfits in baby pink and fluorescent colours. These looks evoked softness in a badass, empowering way! The see through fabric was covered by traditional Chinese tattoo designs. Sabine aka @lokalcowgirl, one of the trio, is an aspiring designer and tattoo fanatic herself. Her own traditional Chinese full-back ink was seamlessly blending with the ornaments of her garment.

When a new model was ready with their makeup, hair and outfit everybody cheered and encouraged them on: “Yaaaas”; “Queen”; “We are so here for it!” Apart from the fashion and having their portraits taken by Harmen –  who is undoubtedly an outstanding photographer with a vision and a mission – people were here for their communities. As Juan ( @pxssypapi) one of the talents said, during his podcast talk with Maryo from DARKROOM,  there is a real sense of doing things together in Rotterdam. There is a continuous creating, and expansion of opportunities and spaces for the queer community and others who fall outside of the rather of conventional understandings of “normality”. This range of opportunities, he felt, was much more accessible in Rotterdam than the scene in Amsterdam where he lived previously. 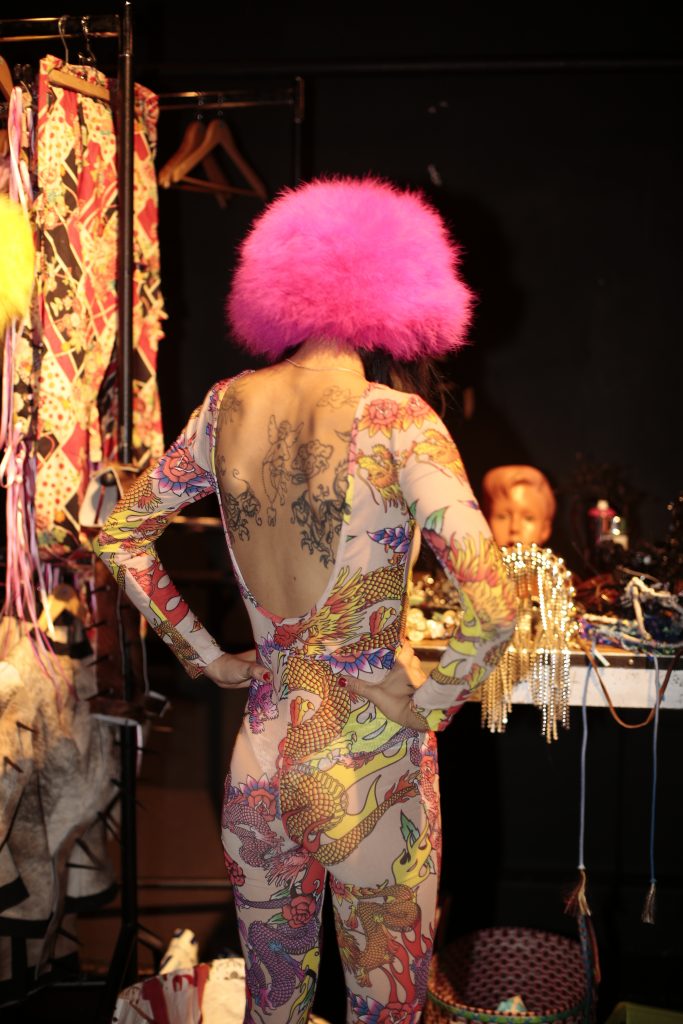 An outcast himself, Harmen Meinsma grew up in a small Frisian village under the care of his grandmother. As a kid who was already attracted to glamour and had a wish to inhabit an alternate reality larger than life, he had to deal with the reality of being the “other”. Nowadays Harmen is inspired by the people he comes across in real life. He amplifies what intrigues him through his lens. “In my work, I direct the spotlight to outcasts and the birds of paradise in this world, and I turn them into icons.”  As an orthodox Christian, who also helped with the creation of the iconography in a few chapels as a child, I have done my fair share of staring at icons. They are images which don’t tell stories, they are there to declare themselves and to provoke reflection and thought process in the observer. Essentially they serve as a mirror. Thinking about that and looking into Harmen’s work one sees that the photos he makes are a mirror meant for our society and for ourselves. The icons ask: “What is beauty?” “Why are you attracted to me?”; “What are you confronted with, when looking at me?”

Diversity is here to stay. And from the conversation I had with Olympia, another of the talents present on the day, this new generation is not interested in labels and “isms”. A model, performer and starting brand owner of @meisjespoepenook.ocr,  Olympia is interested in developing her self-expression as an individual and through that, she wants to support the communities she is part of. Her brand is unisex and challenges gender norms; from body shame inflicted upon women by patriarchal behaviour, to the myth that femininity is reserved only for one gender. 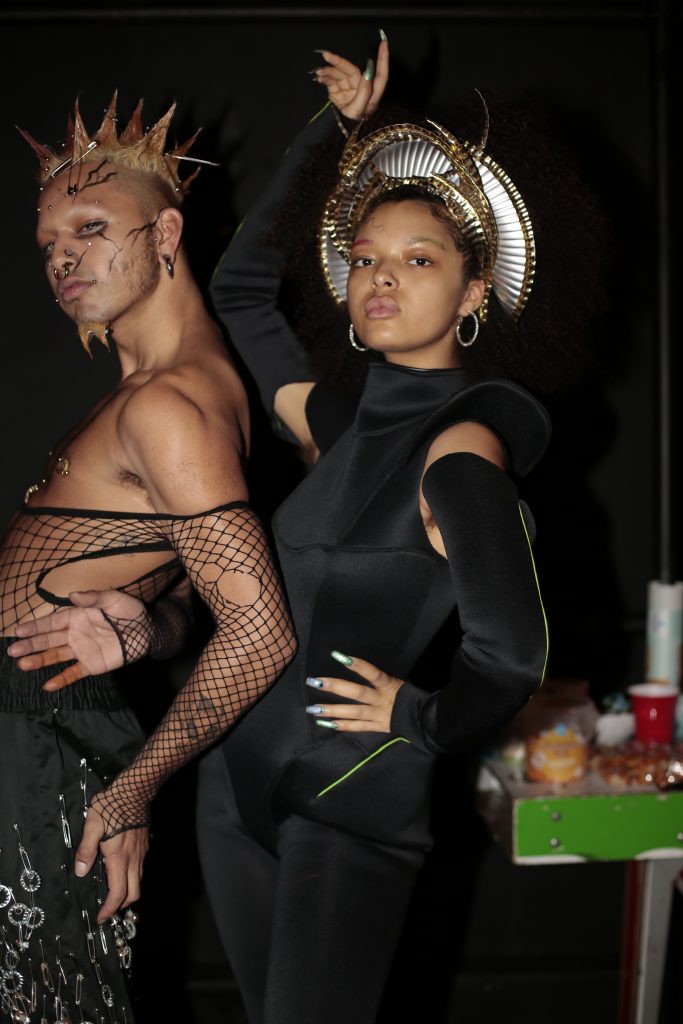 One of my besties who happened to be also my colleague at WORM the artist Natalia Papaeva came to visit me on set. We are usually thick as thieves but due to corona, I haven’t seen her since February. Being able to see her laugh and talk face to face really knocked me off my feet for a moment. I just realised how much I’ve missed human interaction. And it just sank in how special this moment was to be able to be at the photoshoot celebrating diversity, self-expression and glamour. Even though the pandemic was difficult for me, talking to Maryo from DARKROOM shed a light on how (as she called them) “the children of the night” are hit by the lockdown.

Maryo knows nightlife first hand. She used to be a stripper for years. She is currently a coach for sex workers at the red light district in Amsterdam. Besides that Maryo hosts a podcast series called DARKROOM dedicated to nightlife and people who inhabit the small hours of the night. She was only meant to collaborate with Harmen for the first shooting day, during which she had invited her own guests, one of which was the famous drag queer, Chloe, who spoke about addiction and rehabiliation. However, she found it important to be also here today. She told me: “Nia, it’s so important what is happening here! It’s marvellous! Right now there is a whole generation of youngsters who live for, and from the night, they are now stuck at home left with nothing. Some of them have the tools to overcome depression, a relapse, or suicide, but others don’t. We need to keep doing things like that. Also, share practices, knowledge and strategies. It’s a matter of survival right now.” For Maryo being here listening to the stories of these young people and spreading the word in the medium of the podcast meant doing her part as “an elder” in her community. 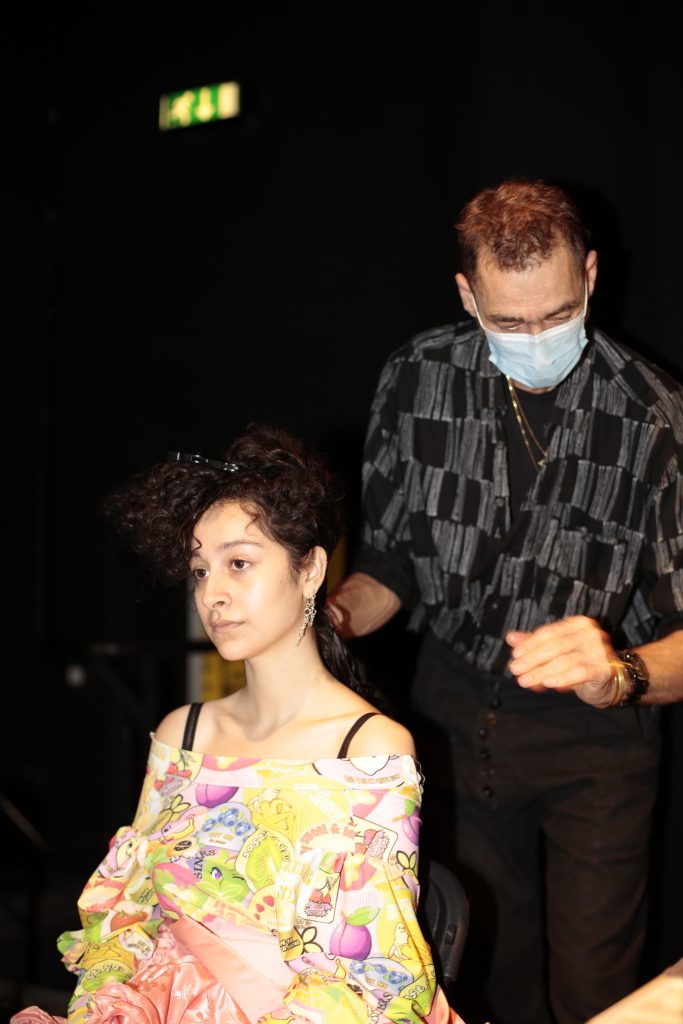 This is when the penny dropped for me. Now, I really, really understood the precarity in which some have to live in times like these and how small actions such as this day can make a difference. Anna aka @sukubratz , who was also at UBIK to model, is fabulous but her actual occupation is a DJ in the Rotterdam cyber scene. “Overall I have always been a raver since I was a teen living my best days in Bristol, I guess the passion for parties is what makes me wanna be behind the deck too.” Anna’s first gigs have been virtual ones, she has found ways to cope with the lockdown and is currently Djing with our partners, Pantropical and  N8W8 in a campaign #DeNachtBlijft, raising awareness around the importance of nightlife and lobbying for more understanding and better solutions from the side of the local and national government bodies.

We are all looking to the future with hope. As of now, we are sure the future holds sparkle and glamour because Harmen will continue POSE! in 2021 with more shoots, exhibitions and performances. This is what Harmen had to share about his experience so far:

“The making of the new series was so inspiring to me and it was a way for me to glimpse into a new generation of strong personalities! It’s very interesting how the new generation feels so nineties inspired and how intelligent and self-aware they are. The confidence they all possess splashes off the images and that was something that inspired me madly!

For me, it was so much more than creating a new series alone, but also to create a feeling of togetherness. Because the series was shot during a partial lockdown, the two days of shooting were a moment to forget about the current situation. It was the perfect setting to connect with each other and to feel united in creating.”