Mári Mákó (HU) is a composer, electronic musician, sound artist and performer. Her unique sound world has been described as a mix of ur-industrial music, experimental electronic and glitch music contrasted with drone textures. It is created with the use of live electronics in combination with voice, specially adapted zithers and other acoustic sound sources; often in conjunction with several “performative tools” and electronic devices of her own creation.

As a composer Mári Mákó has worked together with ensembles such as: Maze Ensemble, But What About ensemble and Klang ensemble. She is also one of the techno duo COMMITTEE.

WORM caught up with her after she finished her residency at the Sound Studios.

It seems you are busy with various kinds of projects. What did you work on in WORM’s Sound Studio during your residency?

Originally the plan was to work on my debut album and I was going to the studio to get inspired by new instruments. Which I did manage to do, partly, but due to the crisis of the pandemic I had to concentrate on a different piece.

I had a performance coming up which was part of the Rothko and Me programme at the Stedelijk Museum Schiedam. I would perform in the same room with Rothko’s painting ‘Grey Orange and Maroon No 8’. It was a very personal project for me. Back in 2015 I visited a Rothko exhibition, which deeply moved me, and from then on I wanted to play music in the same room as one of his works. It really made me wonder; if I get such a strong reaction to his art, then what kind of music could it inspire?

Although back then it seemed an unrealistic idea to be able to have one of his paintings for myself! I thought I would have to be first a superstar to be able to pursue this desire. However thanks to a chain of coincidences and some very kind and helpful people I had the opportunity to realize the project at the Stedelijk Museum Schiedam. They gave me support, which I am still very grateful for. I was able to be alone with the painting for long periods to compose a piece and I did manage to write the main melody in that time. It was truly an experience to remember for some reason the painting for me was a kind of mirror on myself. In a way it was already about solitude and isolation.

However as the lockdown happened the performance was cancelled and I felt that even though these are challenging times it shouldn’t stop creation. I had a strong motivation to bring this project to life.

Did the crisis influence the piece in the end?
Yes, certainly. I had to rethink the whole concept because the essential part was to perform in the same room, with Rothko’s painting. To recreate that atmosphere elsewhere is just simply impossible and I didn’t even want to attempt it.

So while I continued composing at the WORM Sound Studio I was “watching” the painting on my laptop’s screen. I had mixed feelings about. It was at the same time a ridiculous thing to do, but also melancholic and hopeful in a way. It made me feel that the painting is isolated and I felt the distance between us. But more than that, I thought of the exhibition when I first saw Rothko, the sensation of being called, and the connection. So I started to rely on these emotions. And that was the moment when it clicked that piece should be about feeling longing, but not in a defeated way. More like feeling the pause and delay, what we actually experience in our everyday life during the quarantine. Even though we are not sharing space with the art it still exists out there, and there is a hope to connect after all. 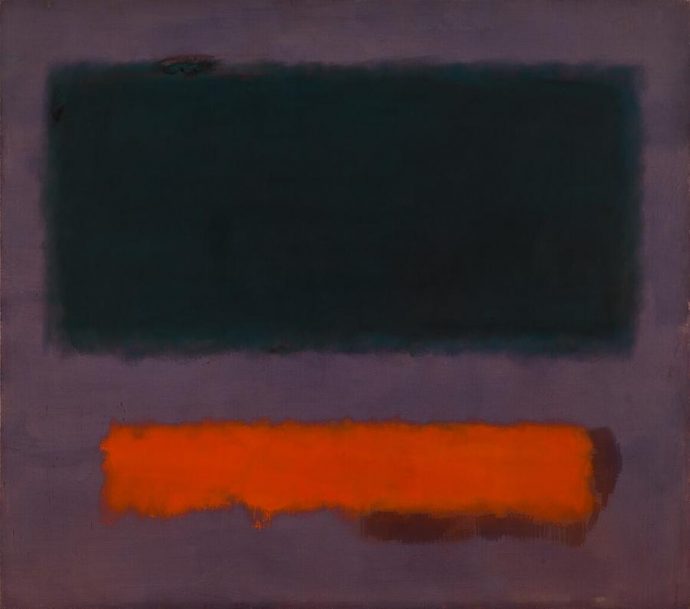 How did you compose the piece in the end?
I still made use of the melody line, which I’d created during my time with the painting in the museum. Also there is another factor which was very important for this project; the legacy of Morton Feldman, the American composer who had already composed pieces for Rothko’s art. It is called Rothko Chapel, which is actually an existing non-denominational chapel in the United States, with a permanent exhibition of Rothko’s art. Rothko Chapel 4 is one of my favorite pieces from Morton Feldman. There was a short melody in the voice, which had a calling gesture. That grabbed my attention. I knew I needed to incorporate that in my piece. It’s just simply a high E D note.

As I was thinking about how best to express the calling in terms of instrumentation it struck me that brass instruments had these functions in mediaeval times. So I asked my father, who is a trumpeter, to play and record this short gesture for me. This act also had a double meaning for me. In these uncertain times, when I am not sure when I can go back home, this motive has a very powerful meaning. Also it made me a bit nostalgic, just like when I was a kid and my dad was calling me, to clean up my mess or to have lunch back at home in Szentendre! (Laughs.)

Next to the piece I used the zither and my voice a lot, to make textures and drone lines in the background. I see this piece as a reflection on acknowledging uncertainty, of being aware of delays, and isolation; but being hopeful and knowing that it’s a transformation through which we can come out stronger together.

It sounds like something we need to hear in these times. When is the piece going to be played?
It will be shared in the coming weeks after this interview! It’s been hard to be productive, even when a project is so close to my heart. I had some moments, or days when I just felt paralyzed or blocked. I still know that music is one of the things which keeps me sane and it’s an art form with the greatest potential to unify people. But deep down the way I was used to working – collaborating, rehearsing, going back and forth in cities, seeing new venues and hearing new music – is just not happening. Also, how we will come out from this afterwards is just a big question mark.

Also I don’t mind just to stay still and be calm; not forcing myself to do anything, just let everything sink in.

However we made a little teaser with my dear friend and a pro videographer Flora Reznik, which you can watch now!

What was it like to work in WORM in a lockdown?
Just before I started my residency the quarantine was announced and frankly it was quite surreal to be in the empty WORM, which is all about people being together and feeling festive! And now this melting pot of Rotterdam was just abandoned. Going around without seeing a soul in the whole building, the tables on wheels were not being played with, no queue at the toilet… I didn’t mind that though, laughs). It made everything seem unnatural.

Also all the labels, tags, posters on the wall suddenly created a different meaning. I was suddenly surrounded with the past, which had its traces all around me, it was a reminder that all what happened will happen sometime in the future again. It felt kind of comforting and also as a promise that we will be back sooner or later.

Can you tell us how you approach making sound?
I like to listen to everyday sounds and ‘noises’ and perceive their beauty in their pure form. That is one of the reasons why sometimes I use quite noisy timbres in my music. I want to quote Scelsi about his approach of sound.

“In painting, perspective was discovered, which gives the impression of depth, but so far in music, despite all the advances in stereophonic technology and all the subsequent experiments, we have not managed to escape from the two dimensions of pitch and duration, and to create a sense of the real spherical dimension of sound.” (Scelsi, 1981)

When I listen to music, the sound has a non-figurative form, which goes through an evolution through time. In Western classical music the main focus has always been on the evolution of the pitches, the rules that they have to obey in order to fit in the music theory. To escape this and to be more free and experimental I find that most potential to achieve that is the use of electronic sounds. I approach sound-making in an unconventional way, but it is also important for me to engage the listeners with familiar structures and sounds as well. It is a bit of a contradiction and there is a delicate balance, for sure, but I like the challenge of it. I also like to see my intuition as an instrument and use my knowledge as a toolbox.

Alongside all that, I also design instruments and one of them, called Schmitt, just got selected for The International Conference on New Interfaces for Musical Expression 2020. It has a similar working principle as a theremin but extended to a quadraphonic sound system.

Any particular equipment you had your eye on at WORM Sound Studio?
There is soooo much there! Total freedom, it can paralyze my creative flow! So I strategically chose two or three synthesizers to focus on. I was mainly composing and recording in the studio, which was a really ideal place to do it. I was tempted to actually record for my debut album and I used the Arp 2600 for that. It is just such a versatile and complex synthesizer with a strong analogue sound. For the Rothko piece I made the ambient texture with the Moog Realistic Concertmate MG-1 synthesizer and I also used the microphone collection for vocals and for the zither. Also I would like to thank Lukas and Wojtek for welcoming me in the studio and for being helpful. 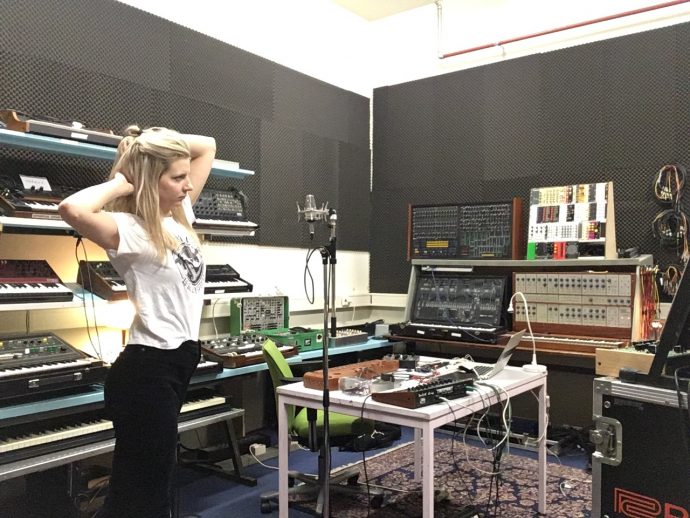 What do you think of Rotterdam?
I really love it here. I graduated from the Royal Conservatory of Den Haag with a Composition Master and I lived in The Hague for a few years. But I never felt at home there. But since I moved here to Rotterdam I always had a different feeling. The city felt cozy and familiar right away. It also transformed how I see the country. If you are going around in the city you can find easily hidden treasures. I love that it’s a city but it doesn’t feel so overwhelming or touristy like Amsterdam. Also the music scene is great and inspiring. It’s very international and has a rich culture, which makes me feel welcomed.

What kind of projects do you have in the future? How are your plans affected by all of this?
So far in my career I was mostly doing live concerts but that is on hold for a time being. As mentioned above, I am also working on my debut album but in the current climate I am not sure how it is going to be realised.

I would like to take it easy, and get new perspectives on how to adapt to the current situation. The music industry is certainly going through changes, and the results are hard to foresee. Nevertheless I am participating in online workshops to keep up my spirits and also rethinking the physical forms of music and live concerts. I am curious to what the future holds. 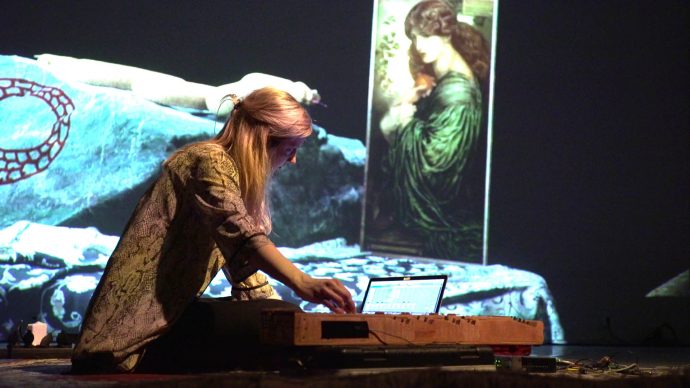