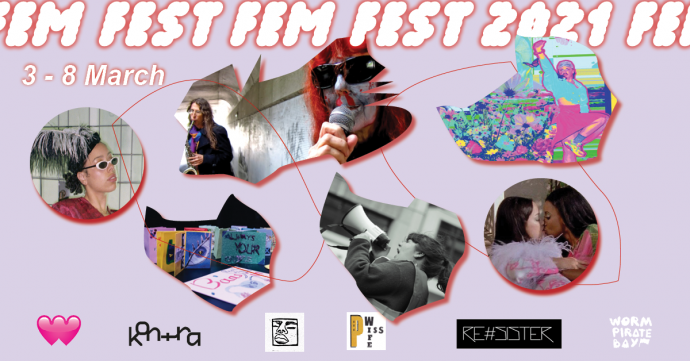 While we enter the second decade of the 21st century, transnational, national and local challenges regarding gender, race, ableism, climate change, classicism and many more remained unsolved. 2020 was a hard year for women globally- the fast-rising inequalities, now more prominent than ever, affected women the most. There was an increase in gender-based violence, a growing unemployment rate that affected mostly women, and an increase in far-right rhetoric.

When we look back into 2020, we see that it was actually a year in which feminist action became more important than ever. And as we enter a decade that holds much promise for a brighter feminist future, WORM and KONTRA want to celebrate that same vision by creating a week-long festival, the Fem Fest, taking place on 3-8 March 2021. Fem Fest centres collectives, artists, activists and groups who are striving to create inclusive spaces that allow actions such as feminism to flourish. By having a mixed programme filled with workshops, performances, panels, film screenings and exhibitions, we celebrate local and national strives towards gender equality and justice.