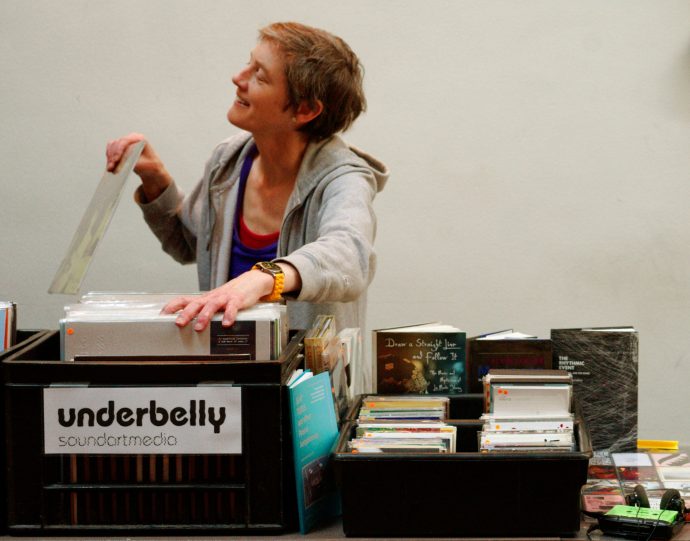 We all know that WORM loves tactile avant-gardistic things. We have, over the years, published the most beautiful products: 8 LPs, many tapes, some books, zines, and (in the golden years of Radio WORM), countless CDs. All still available and for sale via Underbelly (formerly the WORMshop).

We asked the shop’s guiding light Mariëtte Groot to talk about Underbelly and her creative life in genneral.

The name Underbelly suggests covert operations Mariette! Why is the “alternative” world, or the creative world’s “underbelly” important for you?

To be honest the name just popped up in my head at the time and I like the sound of it. Of course there is an association with “underground” which is important for me, but the main thing is that it has a playful, musical ring to it. At the time I checked with a native English speaker, and he said he liked it, as it is a bit .. unruly, grimy.

And why do I find the “alternative” important? I have often thought about taste, or aesthetic perception and how they develop. In my opinion it can only develop in one direction. I don’t think anyone is born with a taste for the “alternative” or for the “mainstream” – where it goes, depends on a mixture of personal growth and what kind of people you meet in life. But whatever happens: your taste either develops into mainstream or to alternative, or via mainstream to alternative, but once you’re in the alternative realm there is no reverse, no way back to the mainstream or to indistinctiveness. It’s like you’re over the hill and cannot return. Then again, there will always be discussions about where one ends and the other begins, which is good. 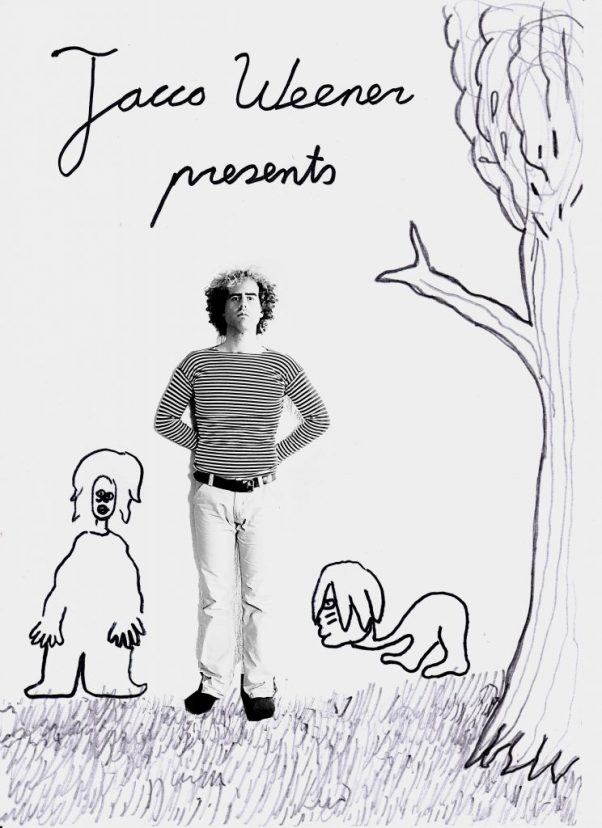 You are also someone who is a very familiar sight at underground events: I think that’s where we first met nearly 20 years ago… What was your favourite event or organisation? Any memories you can share?

So which event was that where we first met? [Ed – You know, I’m not sure, but  some time in 2002-3, I bought a CD with a Julie Mittens track on.] I’m really bad at these things… however, some memorable events for me were the first time I saw the Japanese band Ruins play at Dodorama in the late 90s. It was actually a duo with drummer Tatsuya Yoshida and a bass player, but their massive sound made it seem like a full-blown band. Then there was the evening around Wim T. Schippers in WORM in 2008. It was called: “Ach joh! Morgen is het weer voorbij” and was the brainchild of Hajo, WORM’s previous artistic director. We released our first vinyl record “Hark Too!”, a remake of Schippers’ LP “Hark!” and Schippers was present for the celebration. It was a night full of Fluxus-like craziness. And not forgetting the Neoist Research event I co-organized with Florian Cramer at WORM in 2010. Speaking of Fluxus-like craziness..

You may get the impression that I’m being nostalgic, but no! A great joy has always been the recurrent festival called Ver Uit de Maat that I have had the pleasure to co-organize, with WORM 23 as a special anniversary version of that festival last year. 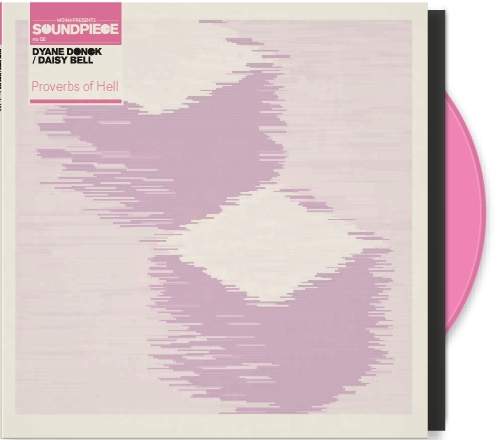 You’ve seen so many changes in people and trends during your time with your shop duties as well as WORM / Dodorama. Are there any constants in that time, in terms of spirit and attitude or is change the only constant?

Yes, maybe change as the only constant may be the right way to formulate this, because what has made WORM always the best environment to be in for me, is the love for the outsider, the natural acceptance of ridiculous ideas.

Inevitably, I have to ask you, how do you think the future will pan out for the creative underground?

If you mean is there a future for ridiculous ideas, I would say: definitely, because people need them! Most of us are incapable of conceiving them on their own, let alone realizing them. On the other hand, many people don’t feel that need because they don’t like change. It brings to mind a phrase we described our Neoist Research Event with: “expect entertainment and irritainment”. 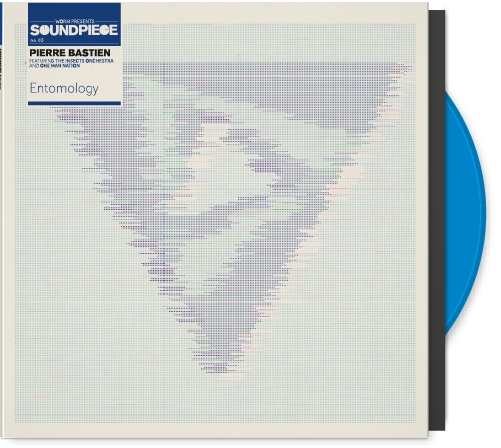 Here is a great piece Mariëtte wrote that gives a further key to her creative MO.

Having had no academic training, except an unfinished one in pedagogy and a few years at a “Free Art Academy” 1970s style in the 1980s, which collapsed soon after, I have been thinking about feasible ways of describing what I do in terms of profession.

My education has been, and still is, I guess, an unplanned and improvised one. It evolved by learning from the people whose paths apparently had to cross mine: musicians, organisers, photographers, printmakers, filmmakers, designers, writers, sculptors, and, most of all, outsiders. The Inadaptables. Out of my fascination for the fringe I became an active part of that fringe. But the ambition to become a fringe artist myself, acknowledged as such by the world, was never that strong. Not even when playing in a band that held a bit of a cult status in the early 2000s, Les Ormores, before dissolving forever.

Apparently my creative interests were too dispersed to even think of going for one of them for a full 100%. And that 100% dedication seemed to me crucial in order to make any sense as a creator. And then come up with stuff that would be better than anything else around, or at least bring something that was not there before. Not so much a training, but an all-consuming drive to make that stuff was a prerequisite. And yes, I know and love the motto: “Everything has been done before, but not yet by you.” But, to be honest and straightforward: I think there are way too many artists in the world, or people that see themselves as such. The number of people calling themselves artists, is by no means in proportion to the amount of actually interesting or necessary artworks.

STRIKING A POSE
So meanwhile, I have decided to pose as either an amateur, grassroots expert, shopkeeper, organiser, observer, or (if I think some weight has to be thrown around) curator. I like the idea of being an amateur by profession. Of  professing to love things. Any of these poses work fine for me when having to clarify why I do what I do. No one would demand some sort of certificate to prove your skills in organising events, or in curating, at least not in the scenes where I feel at home. Cooking a meal is curating. Assembling a suitable outfit for the day is curating. Building a community, too. An amateur might even be a much better curator than an art historian or a musicologist with a master’s degree. For if you manage to get a career and a big job in the arts & culture industry, it will be harder to love things like an amateur does.

SINGLING OUT
My method, intuitive as it may be – and therefore I would not call it a strategy – is to single out activities that happen either in a different universe (the world of the Inadapted), or there where people found their own answer to the Corruptive Market by creating a sovereign position for themselves. In a world with so much unnecessary or even offensive stuff, the skill to be refined is that of being an indicator, more than being a filter. A spotlight, more than assuming some sort of authority.

CARING
Here’s where curation starts. I like to interpret that word as caring, although it stems from curing. Caring means to connect to someone via their work. Being careful in your appreciation of it. Getting in touch with others about this work. Thinking about it. Discussing it.

EXPOSING
If you’re only an amateur there is no need to aspire to any status or career for yourself, based on what you managed to single out. Although it’s nice when it turns out your gut feeling was right and others appreciate that. Your aspiration is simply to pick out the gems so that people forget about the crap.

CONSERVING
If you take good care of what you singled out, it will also be durable. Be it a text, or a record, a friendship, collaboration or at least a shared amateurism, when you manage to sustain your amateur business for a longer time, your eventual “collection” will preserve its value or even increase in value. Though immaterial value was always the criterium, material value may unexpectedly arrive, and come in useful, too. One can only hope that the maker involved, the Inadapted, did not become Ill-Adapted in the meantime, or even eloped to the Hereafter, and can still share in that bonus. Choosing to be an amateur in everything, may not bring about an impressive cv, but it enables me to truly love art. Never a dull moment out there in the fringes.