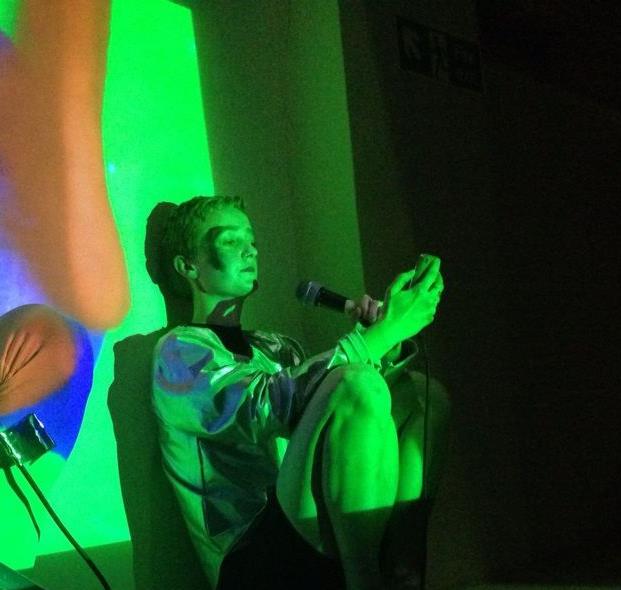 When and where are we all body

Listen to her sound piece, made at the WORM Sound Studio. Note from the artist: when performed it is deliberately more hysterical:

I am a performance artist originally from England. I moved to Rotterdam in 2015 from London.

My art practice is looking to ideas around community, ritual and different belief systems, and then the hybridization of these belief systems. I write myths and stories that combine science, technology and socialist-feminism. I’m doing that by looking to everyday situations and pulling out science fiction from that, because I think we’re living in a science fiction sometimes.

I also work in the kitchen at WORM. Often you’re cooking for people and then you watch their show, which I find really nice. I think food is really important for sharing experiences.

What did you work on during your residency?

I spent my time writing music embodying all that communicates on some kind of vibrational level, finding inspiration in thunderstorms, insects, and other micro/macro economies. In my own mind, I experience sound as something that moves in and out of me. That’s something that I wanted to explore.

On the whole, my residency was a strange experience: I was in here at the end of the summer and it would be a beautiful day outside. Yet you’re in this kind of pod, really becoming machine or something.

How did working with sound factor into your practice?

Sound is something that is really important in my work either way. I’m always very interested in having a synesthesia approach to making where layers build up over each other; whether it’s through costume or spoken word or sound or choreography. So it’s one node of a larger body of work.

I’m a huge fan of Holly Herndon. She makes music about what it feels like to be alive today. Her music is really chaotic and it’s definitely building on this kind of programming and music-making. I am really inspired by that.

I’m not a musician, I’m an artist. I know it’s essentially the same but I’ve always been a bit intimidated by music. I play some drums but I’ve only just started being in a band now. So, it’s still kind of a new portal for me, but as a performance artist I see it as something that I’m incorporating into my work.

How did you experience working with the equipment?

I originally got some lessons from Anne Wellmer. She is an amazing synth player. It was really cool to have a breakdown of these machines. She basically told me: “I can’t teach you, you have to just do it. I can tell you how they work, but you should read the manual.” The manual was always really intimidating, though!

The synths are super inspiring; you just spend half an hour in there and you find that you’re responding to them as well. The synthesizer tells me what sound comes out of it. It’s very organic, like a live organism.

I find it curious that I don’t feel that I can repeat it and there’s something in that. To me, it feels like live streaming or linked to radio in a way because it’s so mechanical and yet unpredictable. There’s something quite true to performance in that.