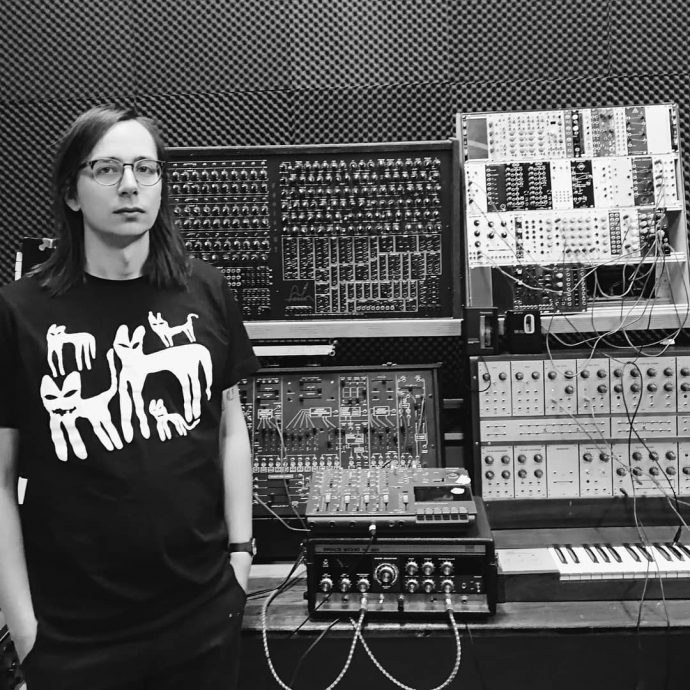 Loop and ARP fun in the Sound Studios

Dmitri Zherbin (b.1984, Republic of Karelia, USSR) is a tape loop manipulator and guitarist now based in Helsinki. A prolific artist, his work ranges from lo-fi ambient soundscape to noisy tape collage. He’s also a member of no wave band Fate Vs Free Willy and post-punk duo Black Tile. In a previous incarnation he played in drone duo Banana Pill. You can check a lot out on his Bandcamp.

Recently Dmitri spent some time at WORM’s Sound Studios, and in time-honoured fashion we asked him some questions.

Please introduce yourself!
My name is Dmitri Zherbin, I’m a self-taught musician and noise artist from Helsinki, Finland. I’ve been making experimental music for about ten years now. During the last few years I explored the tape loop method where I record different sounds on cassette tape loops and create music pieces by playing around with the loops.

What did you want to make at WORM Sound Studios, and were you “successful” in that?
I didn’t have a strict plan or goal, just wanted to play around with the instruments, apply my tape loop technique to them, record the sounds for later editing. I did manage to record a lot of material; I think generally it came out pretty good. I now have hours of music on my hard drive that I need to go through and edit and – some day – release. I’d say it was successful, I mean it’s hard to fail when you don’t even have a specific goal.

How do you approach making sound?
I work a lot with found sound and field recordings, sounds that are not considered musical traditionally. Like I mentioned above, I record these sounds on cassette tape loops and make pieces of music with that. The time at WORM was unusual for me in a sense, because I don’t normally use “real” instruments like synthesizers to make music. My approach at WORM wasn’t to just play the synthesizers, but to record synth noises on tape loops, so that way it’s not too different from my usual approach.

Any particular equipment you had your eye on at WORM?
Before I came, I was very curious about the ARP 2600 and I did end up using it for most of the recordings I made. I was also looking forward to playing around with the Serge, but unfortunately there was some problem with it during my stay and I couldn’t use it. But at the end it wasn’t a big deal, because there were a lot of other instruments, I didn’t even have time to go through all of them. Some of my favorites were BME Axiom modular synthesizer, some Eurorack filters that I put field recordings through and the Space Echo.

What do you think of Rotterdam?
I didn’t see the city that much, because I was spending most of the time in the studio. But I did walk around and bike a bit and even managed to do some field recordings. The feeling I got from the city is that in some ways it’s like Helsinki (where I have lived for the past 20 years), it’s not too big, but still feels central and with a lot of interesting things going on. I’d love to visit again, maybe explore the city a bit more.

Any plans for the future, if we can look past current events?
I have quite a few releases coming up this year, both solo and collaborations. I’ve been recording a lot over the past couple of years and not really releasing that many albums. Now it feels like the time is right to start putting it all out there. I also have a project going on where I visit waterfalls across Finland and make on-site tape loop installations with the sounds that I collect there. Now the region where I live is isolated from the rest of the country so I can’t travel very far, but I hope it won’t affect the project too much. I’m also planning to do some live stream concerts from my little home studio soon. Just have to figure out some technical things first so I can have a proper high-quality sound.