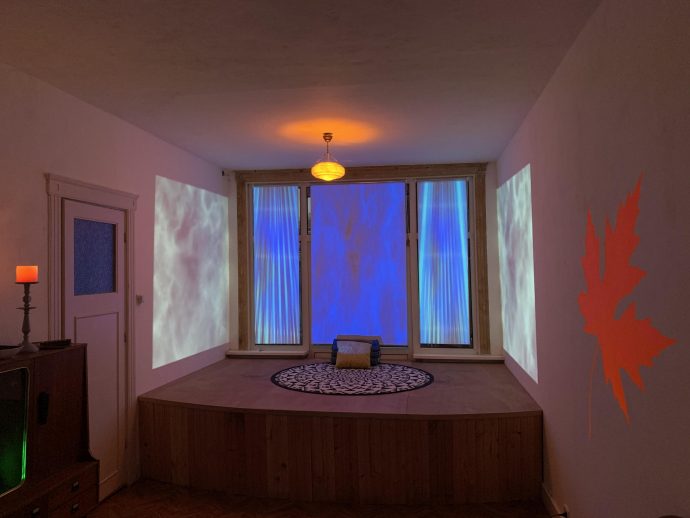 Daniel van den Broeke is well known as one of the faces of the wildly popular The Performance Bar, which is to be found creating beautiful shapes in space, next to WORM’s S/ash Gallery on the Boomgaardsstraat. Or was. At time of writing (November 2020) Rotterdam is still shut for public entertainment, due to the Corona regulations. Not someone to sit still, and able to draw on decades of experience with both The Performance Bar, Parade and many other performance and theatre-based activities in the Netherlands, Dan decided to build a stage in his own house in Rotterdam. Quite a step, but then we are in extraordinary times. When he was able to call time on build-up we asked our colleague some questions. There is a great video to watch, too, where we are introduced to the stage itself! Over to you, Dan.

Not everyone builds a stage in their house. How did this idea come about?
Building stages has been “a prominent thing”, you could say, throughout my career.  I started off after theatre school building a mini stage on wheels, then a performance bar, which kind of became my home. And now that I moved into a really nice old house it’s time to bring the stage literally into my house.  I love the metaphor of the stage.  In life we often overlook the power of creating circumstances for beautiful things to happen. I think that is because we are too goal oriented.  The stage stands for potential and support, for reflection and celebration. What a great thing to have in my house!  Although I also must confess, it’s a really nice platform to chill on.  Maybe it’s main purpose for me will be to learn how to be more lazy.

How big is it? And the audience space?
The stage is similar to the size of The Performance Bar. It’s perfect for small scale acoustic performances.  I wouldn’t want to put a whole band on it, though, as I’d like to hold the good relationship I currently have with my neighbours. I would say that no more than 20 people can make up the audience at any given time, and when the Covid rules would allow it.  For now we can squeeze in three people, I think. That will not stop me from organising something. It’s all about the quality of the experience, not the quantity of the people.

What kinds of performances are you looking to do?
Anything that is inspirational and not too loud, but I have silent disco headphones to hand, so that allows for other options, too.  I would like to hear a cello concert or an interesting talk about science, say. Maybe a themed night, where we make a whole play, through improvising.  And of course, some good wacky and experimental stuff.

The Performance Bar made some great online editions in the first lockdown. What was it like to set up this online Performance Bar, “behind the scenes?”
It was my way of coping with the whole situation. I just didn’t feel like surrendering to the slowing down, something that I now actually see as essential. I was in turbodrive, learning how to create virtual environments, creating content and trying to maintain the crazy Performance Bar vibe. It was intense to create, but I think we succeeded in those shows. It was crazy and I even miss it.

How did an interactive entity like Performance Bar deal with online shows as a concept? Was it easy to do, emotionally or spiritually?
I was amazed how much connection was possible still though a medium like Zoom. To see people in Berlin or Paraguay or Rotterdam get creative with (for example) pickled gherkins at the same moment in a virtual space blew my mind in a way.  But also, it just reinforced the fact that it was sad that we just couldn’t be together.  I always say: The Performance Bar was always the place where you would catch “the positive virus”; meaning that you would come to us and something inside you would change a bit, something that you could then pass on to others.  In that sense The Performance Bar is hopefully currently active in the hearts of many people who have a pleasant memory of a visit.

It’s been a difficult year for live performance. Do you think good will come of it?
I hope that after this period people will rediscover live performance as if it is a good wine that you put away for a special occasion. And then learn to appreciate it more than before.  In a time where our digital lives are more dominant than ever people are just longing for some good old togetherness.  Performance has that live aspect that we are craving for.  So I say hell yeah!  Our most legendary times are yet to come. Hang in there for now and know that we are just waiting to get back in the game again, when we are allowed.