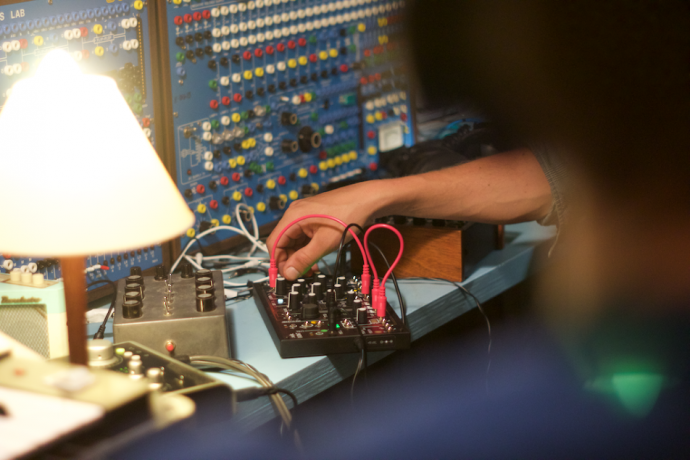 We’re two suitcases of gear, three albums and a single. Three travellers with high hopes and low expectations. And we haven’t stop growing yet.

What did you want to make, or explore at WORM Sound Studios?

Our aim at the WORM studios was to continue our recent path of developing our music live instead of programming. This process was then augmented by the vast routing and sound generation possibilities. It was also a time to let go of some dogmas that we carried up to now.

Did any preferences to sound or approach reveal themselves while you were here?

The music that we came up there was largely influenced by the fact that many of the synths come with keys as a control surface. This brought up a slightly more tonal flavour, although noise (complexity) and silence (simplicity) are still our comfort zones.

And was there particular equipment you liked to use?

The Adam A8X speakers where a welcome sight/sound as their little brothers are what we’ve used for a while with Rooie Waas. The Yamaha CS50 was of particular favourite, as well as some Moogs.

What are your experiences of Rotterdam as a city and as a place to work?

Working at WORM in the centre of Rotterdam was a really inspiring experience. The studio has a different tempo than the outside world. You might go in at ten with no-one at the office, by the next cigarette there’s a full party in the main room. The bar crew and everybody are just too nice. On the last day it was really sad to leave.