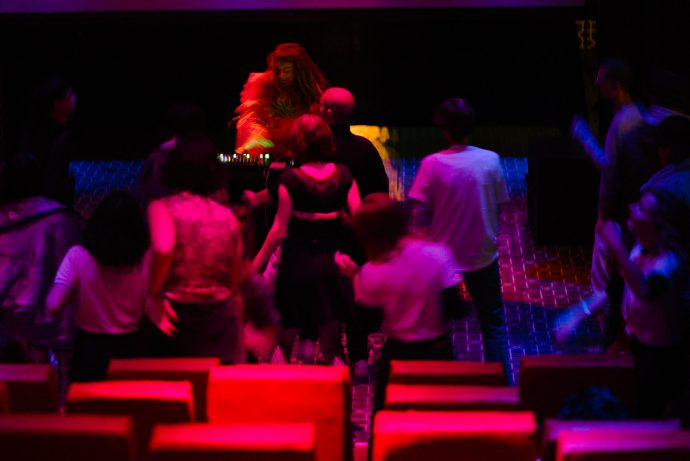 We asked Mariette Groot to give her thoughts on WORM’s “last” pre-COVID festival, WORM x Mama Cash x Kontra Feminist event the weekend before the virus changed everything maybe for ever… Over to you Mariette!

WORM has been celebrating International Women’s Day (March 8th) for several years now. The last 3 editions have been under the umbrella of the Feminist Festival; organised by the largest women’s fund in the Netherlands, Mama Cash.

Looking back, we were very lucky to be able to realise this year’s edition, just one week before the whole country went into lock-down. WORM’s last festival before everything collapsed… and how long will it be before we can even do a festival again? So let’s relive it.

Infinite Resistance, Infinite Joy. That was the motto we chose this year. Celebrating, while being aware there is still so much to fight for around the world when it comes to women’s rights. Realising how spreading joy can be a way of resistance, and what the power of humour can be. That was why we invited the ultra-charismatic Lux Venérea from Berlin: Apocalypse avantgardist. Tragic comedian. Underdeveloped activist (that’s what she says about herself by the way).  Her stand up comedy speaks frankly and hilariously about her reality as a Brazilian brown trans woman living in Berlin, and traveling throughout Europe.

Another powerful tool is noise. And we love noise. That’s why we had Aja from Nottingham, UK, on stage. Looking pretty in pink while producing razor sharp beats, blasts of white noise and tortured banshee wails.

Freedom to express who you are and celebrating that freedom in a respectful environment is what the voguing community is all about. So, just like the year before, The Kiki House of Angels and Kiki House of Major (voguing houses)  brought an exuberant voguing competition to the festival. Competitors  took the catwalk to impress the expert jury in as many playful and imaginative ways as possible.

And for those who long to explore ways of re-creating themselves there was Yamuna Forzani, fashion  designer from The Hague. Her workshop was about bizarre and  extraordinary outfits, which could then be presented on the catwalk.

So yes, plenty of extraverted energy, which is always good to balance out with some serious reflection.The feminist film programme, curated by Bibi Fadlalla, provided food for thought and discussion. The films were by Shannon Kahnai, Mujeres al Borde from Colombia (who had been invited by Mama Cash), Elisabetta Agyeiwaa and Silvia Martes. A panel talk with the makers, hosted by Minem Sezgin followed. In the meantime, out on the streets, the Rotterdam Slutwalk, organised by Kontra, took place, mobilizing hundreds of participants with self-made banners, with slogans like: “Viva La Vulva” and “Horny for fucking the patriarchy”. Many of them  marched straight into WORM for their indoor programme: Kontra curated an Open Mic session, a button-making workshop, a performance by Sarafina van Ast, and an amazing art exhibition in WORM’s former smoking room. The artists exhibiting (Julia Luteijn, Sophie Bates, Daniel Walton, Khaddouj Barghout and Rowie-Ann Plomp) presented a variety of works that each had a strong feminist story to tell.

By dinner time, outside on our Wunderbar terrace, the by now traditional  happening called Pizza & Cigars took place, which, as you may have guessed, involves eating pizza and smoking cigars, this year with the young feminist art collective Blédarte from Brussels, as guests. After dinner, in the foyer, Las Reinas Chulas from Mexico City re-created the Evolution of Woman in a mini multimedia theatre.

Finally, the 2020 Fem Fest culminated in a high-energy dance party by Rotterdam collective KLAUW. The whole event covered two days, the biggest edition so far. It’s wonderful to see how feminist action is getting a stronger foothold in Rotterdam, for which we should credit not only ourselves, but also Kontra who have become a serious agent of infinite resistance and joy!

WORM is enormously grateful to all participating artists, to Mama Cash and to Kontra, for another wonderful Feminist Festival.