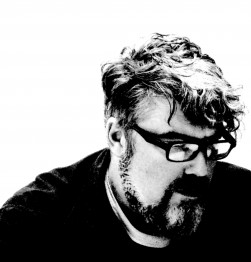 Joe Cantrell is a musician and multi-media artist who specialises in sound art, installations, compositions and performances inspired by the implications and consequences of technological objects and practices. Cantrell’s work examines the incessant acceleration of technology and media production, its ownership, and the waste it produces.

You came to Rotterdam, you saw, and experienced. What stuck in your mind about the city?

At night on the Valkyries’ rock, the three Norns, daughters of Erda, weave the rope of destiny. They tell how Wotan ordered the world ash tree, from which his spear was once cut, to be felled and its wood piled around Valhalla. The burning of the pyre will mark the end of the old order. Suddenly the rope breaks. Their wisdom ended, the Norns descend into the earth.

What kind of noises were you making in the Sound Studios?

Did you find some gizmo or the electronic equivalent of Gandalf’s sword to amuse you in there?

The expression: 1− G(s)H(s) = 0 is known as the characteristic equation and contains important information regarding the system’s stability. Generally speaking, the roots of the equation are of the type s = α ± jω . When α = 0 the system is marginally stable and s = ± jω . If certain conditions are met, this situation will describe an oscillator in the steady state delivering a constant-amplitude sine wave of radian frequency ω.

Did you feel WORM as a kosmische entity?

The Devourer of Gods is a powerful post-moon lord boss, also the seventh boss of the mod. He can be summoned with the Cosmic Worm at night. This boss can not summon naturally, but in a previous version, it was able to spawn naturally on Nebula Tower. This boss has also a custom boss music.

How did you make Sarah Palin cry? Did you steel her Moog?

I dreamed I had some clerical job and Sarah Palin was my co-worker. We shared an enormous steel-case desk. I stapled some receipts to a document and she complimented me on my stapling ability. At that moment I realized she was right – I had a uniquely elegant concise stapling style and I had never noticed it before. I told her that she made see something new about myself and she burst into tears.

Productions
We use cookies to ensure that we give you the best experience on our website. If you continue to use this site we will assume that you are happy with it.Ok