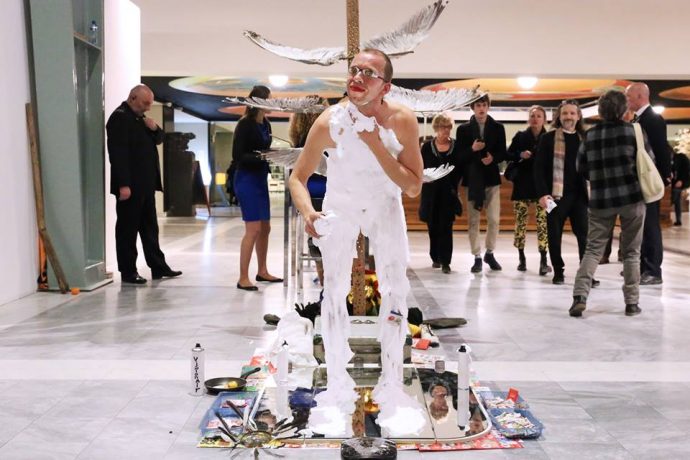 Dear viewer, it is here! The third video premiere of IMACO (The Imaginary Art Collective) in which four artists explore what objects mean to us and when it’s time to let go of them. In this week’s release a new performance by Toine Klaassen! Toine Klaassen is an autonomous artist born in 1973, and inspired by the 1990s – especially by the YBAs, the Young British Artists who dominated the artistic scene with throwaway materials. The artist is based in Rotterdam and works on installations, performances and workshops.

He is a collector of different objects and materials that he uses in his installations, like the remarkable room-filling projects he did in WORM in 2017: “Rehearsals for Re-integration in Paradise”,  and the 2019 installation, “carbon connection city hybridization tablet” at “Open The Gates”, as well as the very intimate encounters with passengers in public space during 2019’s DAMNedACT.

At the centre of Toine’s creative practice, an infinite variety of objects is used but above all cages of various sizes and shapes. We speak of bird cages that have been part of the artist’s life since he was a child. Looking at Toine I see a certain resemblance to birds; it is he himself who tells me that he wanted to be a bird and instead found himself to be a human being. It makes us smile as we talk about it, but inside me, I feel a bit of bitterness: do we believe we are free, while in reality, we live in a cage? We believe we are better than a bird because we have the gift of reason, but they have something that we can hardly get: freedom.

The world of birds, flight, freedom or the idea of being locked up in a cage…When I think of these strange animals that have the gift of flying, two opposing concepts come to mind: freedom and imprisonment.

With Toine and his co-performer Lin we retrace a journey through these ideas. The cage Toine brought is in the middle of the table, sharing the interview with us in the backstage of WORM.

The cage … Found at Rotterdam Central Station five years ago. This is a particular cage because it was customized by Toine with wings of seagulls found dead on the street. The wings are a sort of totem that makes me think of the power of freedom of this object. What is the link between freedom and cage? I personally believe that it is the theatre, the performance, the use that these two artists make of it.

Even in his personal life, the artist experiences this feeling of closure by entering one of his cages. He confesses to me that he has a large dog cage where he sometimes sneaks in and stays there. It almost seems like a nice way to stay safe and maybe feel free. Being closed, being outdoors, standing still, moving considering the other, and flying, are all thoughts that intersect and interweave in a game of oppositions and apparent contradictions.

In particular, this cage carries these meanings within it. Used for a performance at the museum Boijmans van Beuningen during the Rotterdam contemporary art fair around two years ago, it represented an experiment in a particular context: a surrealist exhibition in the museum and the art fair, where art is “mundanely” priced, and traded.  Toine tells me about the museum full of connoisseurs intent on interpreting a Dalì or a Magritte … The environment of the art galleries, a bit snobbish and chic. To break this atmosphere, Toine and Lin, with both their heads tucked in the cage, walked freely in the corridors of the museum. How much beauty I see in this image: pure and true Surrealism in a live version.

During the performance, Toine and Lin must take into account the other, and balance the movements so as not to hurt the partner. While describing the use of the cage in the performance, I think of research on the body, movement, balance and the act of “seeing the other”. All these concepts that this cage brings are the cardinal principles of the theatre, but also of the ritual. The seagull wings that decorate it accentuate this sense of rituality.

The interview with the two performers becomes a mix of memories and reflections, and dives into the past and present, but also into the future; in fact, today is the opportunity to say goodbye to this object and make an act of generosity and liberation, by delivering it to another artist. Of course, it is difficult to get rid of it because inside this cage there is so much history and vitality to celebrate with a performance. Now the two artists feel more comfortable inside the cage because they know how to move, they have found their strategies to use it better taking into account the other person inside. They move like twins with synchrony and joints studied at best.

Now that they know it, do they get rid of it? It is precisely when you get to be skilled, that you need to have the courage to change! So we say goodbye to the cage by celebrating with beer and chatter, and thinking that, thanks to this animal-object, we have met other humans and shared with them a part of us.