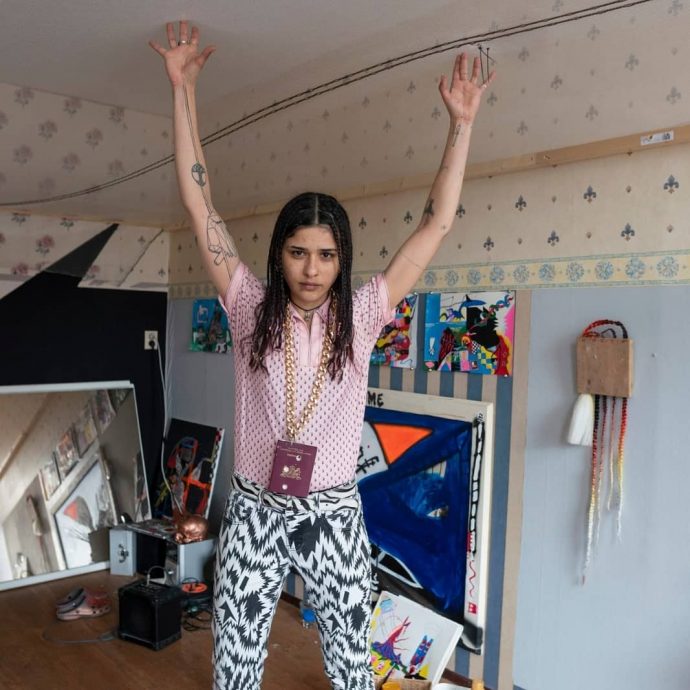 Dear viewer, it is here! The second video premiere of IMACO (The Imaginary Art Collective) in which four artists explore what objects mean to us and when it’s time to let go of them. In this week’s release a new performance by Roxette Capriles. Roxette Capriles is an artist and performer based in Rotterdam. She was born in Curacao (1993) where she began her artistic practice at Instituto Buena Bista. A red suitcase, a red leather luggage bag with a horn….this is the object that Roxette Capriles is getting rid of today. We say indulge!

She is here, in WORM, to tell us about the story behind this object and to give a goodbye-performance to it. But first, let’s get to know Roxette a bit better!

When asked if she considers herself an object person, the answer was – “Definitely Yes!” Roxette’s artistic practice is very object-based. She is interested in creating and searching the meaning behind items. In her practice, she transforms our perception of objects, like in the project “Treasure Junk” at Treasure Junk Museum in 2019. Where she created an installation piece with items from 1 euro stores with the question: “When is an object worthy to be in a museum, and on what basis?”.

Roxette sees it as an artist’s responsibility to give meaning to used objects. Animism (the attribution of a living soul to plants, inanimate objects, and natural phenomena) is at the core of her practice. It is also our responsibility to create respect for the environment and with that bring a positive change. Her fascinations deprive of childhood memories of objects and images in Curacao.

Roxette is also a walker, roaming the streets of Rotterdam. This is how I see her while I’m talking to her, our minds wander to places where many interesting objects are appearing like magic stuff next to garbages. She is currently part of Slopera an experimental opera piece taking place in Pension Almonde which gives refuge to urban nomads and their practices.

We also talked about the current C-times, and I ask her if during this period objects are even more important for her? No, it was not her first interest in this time, she was working and had shifted into survival mode to take care of herself and her mother. We are glad to be part of this performance which in some way reflects their process during the quarantine. Ok, I am getting ahead of myself, let’s go back to the suitcase!

The suitcase…It’s intriguing, there is something special about it, both attractive and fetishist. It also possesses some kind of darkness. When I ask Roxette about where the object comes from, she answers: “ It comes from another project called Treasure Junk and I found it in the middle of the street. The suitcase seemed to be a static object so I decided to make a combination with another object. That’s why I put the horn on it, which has an extreme connotation”.

What thoughts does this object provoke in me? I think about travel, going somewhere, a city trip. Or maybe it is provoking me to travel and explore internally? She had the strength to travel inside herself and accept that different sides of our bodies and souls exist simultaneously. Letting go of the luggage which travelled so long with all of us: to think binary. Roxette doesn’t have to choose anymore, she has decided. The suitcase is a symbol of travel which has been completed and it is not needed anymore. So she is getting rid of it today.

Roxette tells me that suitcases are an important part of her life.
“My ex and I were collecting suitcases because, at a certain point, we became nomads, travelling from one place to another. We collected luggage bags for our belongings to move with us.”

Another woman also inspired this performance: Roxette’s mom. She was an important sparring partner for this project. The artist is blowing up balloons to underline the importance of breathing…especially in this time. She destroys the inflatables with the horn of the suitcase, so our breath can finally be released.

Roxette realised that she doesn’t need this object anymore. Sometimes it is necessary to internalise an object and what it represents before we say goodbye.