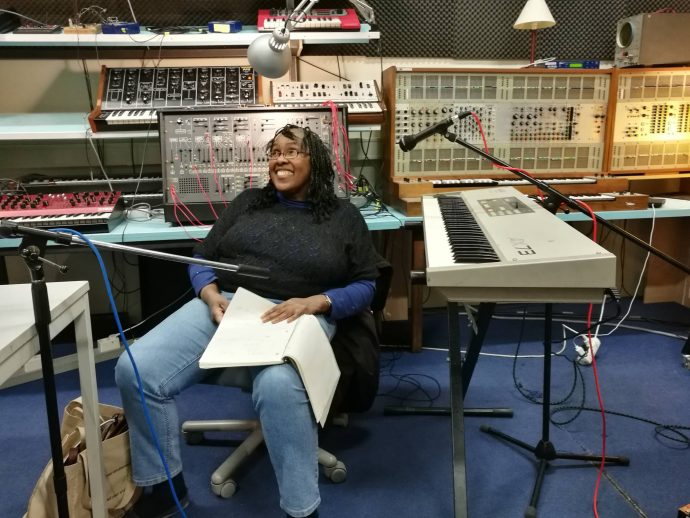 BJ Snowden is a singer and songwriter based in Massachusetts, United States. She used to earn her living teaching music in schools. She is widely regarded as the most renowned outsider artist, although she herself is ambivalent about this label. Undeniable, however, is her worldwide cult following after the debut of her 1996 album “Life in the USA and Canada”. In lieu of her residency at the sound studio and her performance at the event Ver uit de Maat (18 December, 2016), we did a short interview and found the same sincerity and kindness that is characteristic of her musical work.

What are you working on here?

Today we’ve been talking about the history of me, my childhood, and how I got into music. And then I played some songs today. Then they [Lukas Simonis & Niek Hilkmann] played some songs with me! I’m working on some songs here and I’ll be recording the rest of the album back in the States. In my next album, I’ll have one group of Canada songs and another group of holiday songs.

What do you play?

I play piano, but when I went to school to get my certification to teach I had to take the other instruments. I took flute, viola, trombone, french horn, and clarinet. My mom says when I was three years old I would play with the piano. I don’t remember that. She used to play music on the piano and I guess I picked it up myself.

I used to be a teacher, but I couldn’t deal with the administration. In fact, one of the songs I recorded is about conspiracy, because I think that a lot of the people in the administration are conspirators. They’re two-faced!

It’s nice but I haven’t really seen that much of it. But I’m here, and I want to see more. I want to write a song about it.

My grandmother is Canadian, and I decided I’ll take a trip to where she comes from in Nova Scotia. It was very rural, people were very friendly. I have a lot of relatives up there. It’s a big country.