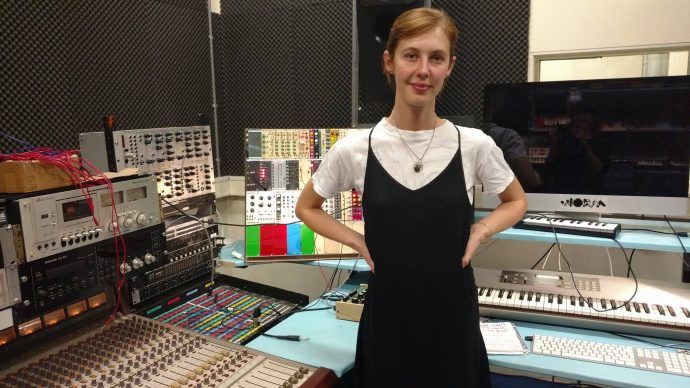 “A bit about me, I’m a musician from Melbourne in Australia but currently based in Berlin. I have been releasing music in groups, and now solo, through the Berlin based label Blackest Ever Black.”

I came here and played a show (in the #Wunderbar) in June. A friend – Ash Kilmartin – had done a residency here and she recommended it, so here I am! It’s an opportunity to spend time here, and with Ash, so it’s all good.

I really like it, it’s very chilled though I haven’t seen much of the city. I have looked round this area (Witte de With). I’ve also played a gig last year here, I can’t remember where, but it was north of the station [LAUGHS].

[Carla looks round the studio and sighs.] I like this one [points to a strange “contraption” in the corner]. I think it’s just because of the aesthetics though; as I like all these nobs and buttons. But it’s all of a mystery to me because I’ve not really worked with a lot of the things here. So I’m planning on working my way around the room, and maybe I will find one that isn’t just based on my sense of aesthetics…

I am pretty practical when I work. And normally I don’t have the luxury of  having a lot of equipment. I have just made an album and there’s a lot of DX7 on it, but I was lucky enough to borrow one from a friend. But I may start using equipment in a different way after this week.

Carla dal Forno’s new LP, You Know What It’s Like, is released  27th October 2016 on Blackest Ever Black.