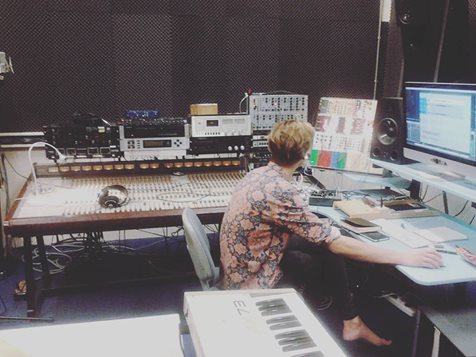 Big Hare is an Utrecht-based duo made up of Luuk Ottenhof and Tim Fraanje. Together, they create self-dubbed “happy experimentalism in a funky format”. In March 2016, they performed at WORM, opening for Baaba. On 3-10 January, 2017, they returned for a residency at the WORM Sound Studios.

What are you working on?

We’re recording some tracks. We want to make a carnival-themed record. But it has to be a sick, rotten carnival, with elements from local pubs, and shooting games. We also want to make use of all kinds of sounds you hear at the carnival.

How did you come up with that idea?

We were recently at a carnival, and we walked past one of those stands where you can shoot things. The man hosting the stand reminded us of a fallen show man, which is maybe why he has to work at the carnival.

What kind of carnival sounds are you planning on using?

[They start playing a perverse version of carnival rhythms distorted by the synthesizer.]

In terms of the theme, we’re also on a search for that point where there is nothing left anymore in terms of identity, so you start to act self-important and theatrical – like a diva – as a way of keeping yourself alive. Maybe, as a way to deal with the fact that you don’t get fame, you try to find ways to at least feel that way.

Our first record was really introspective, and this project is directed more outwardly.

We want to use a lot of carnival sounds. We have three tracks that are practically ready and lots of… noise. [Chuckles.] We still need to see what we want to do with it.

How has WORM and Rotterdam inspired your work during your residency?

Last night we were at a bar, drinking cheap whiskey. When the song, “You Can Leave Your Hat On” started playing, a man started dancing on the bar. That’s the kind of exaggerated showmanship we’re trying to grasp; you’re right on the edge, and you’re trying so hard, but it’s actually kind of embarrassing. We also recorded some sounds from the Wunderbar and we want to see if we can use that.