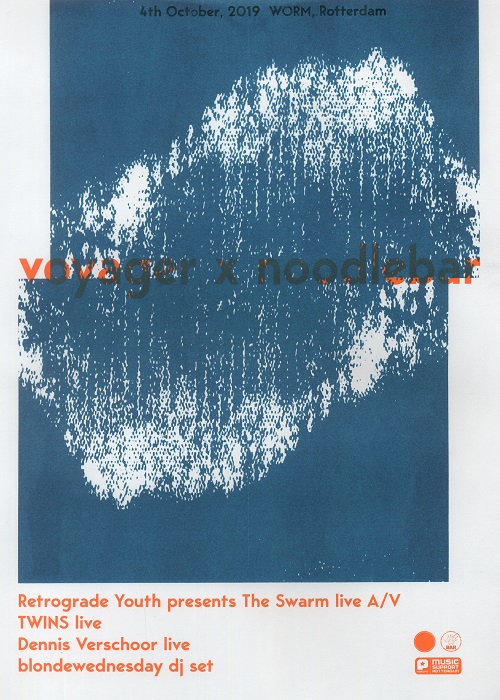 TWINS is the mutant machine-pop project of Atlantan producer, label operator, and all-around aesthete-visionary Matt Weiner. Operating from his home studio, Weiner tempers his subtle scourges of sound with an unending sense of bold exploration, processing tracks of pulse-heavy aural catharsis. When not making music as TWINS, Weiner also runs the CGI Records label and co-runs the DKA label, between the two releasing music from Boy Harsher, Profligate, Alex Falk, Golden Donna, and many more. Weiner also performs in the duo Pyramid Club with Chris Daresta, and produces music in the studio with Stefan Ringer as SM42 and with the esteemed CH Rom as Wo.

blondewednesday is “a solemn child, prim in dress and, on the whole, pretty lost … secretive and imaginative, underprivileged and given to occasional tantrums. ” Blondewednesday’s notable influencers are many; ballet, or the headless dolls of her childhood.

Retrograde Youth
Retrograde Youth will present his new project – The Swarm with a A/V LIVE show building during his 5 days residency at The Waveform Research Centre and closing the night with a Dj set.

Growing up in Medellin, Colombia, Felipe Marin aka Retrograde Youth also co-runs Move Collective and Culto, two different projects and parties that had the opportunity to bring artists such DVS1, Silent Servant, and Intergalactic Gary to Colombia. As a producer, RY’s sound could be described as a combination of classic Wave or Industrial with Techno and House. RY has released on respected Delta Funktionen’s label ‘Radio Matrix’ or on the well known ‘Pinkman’.