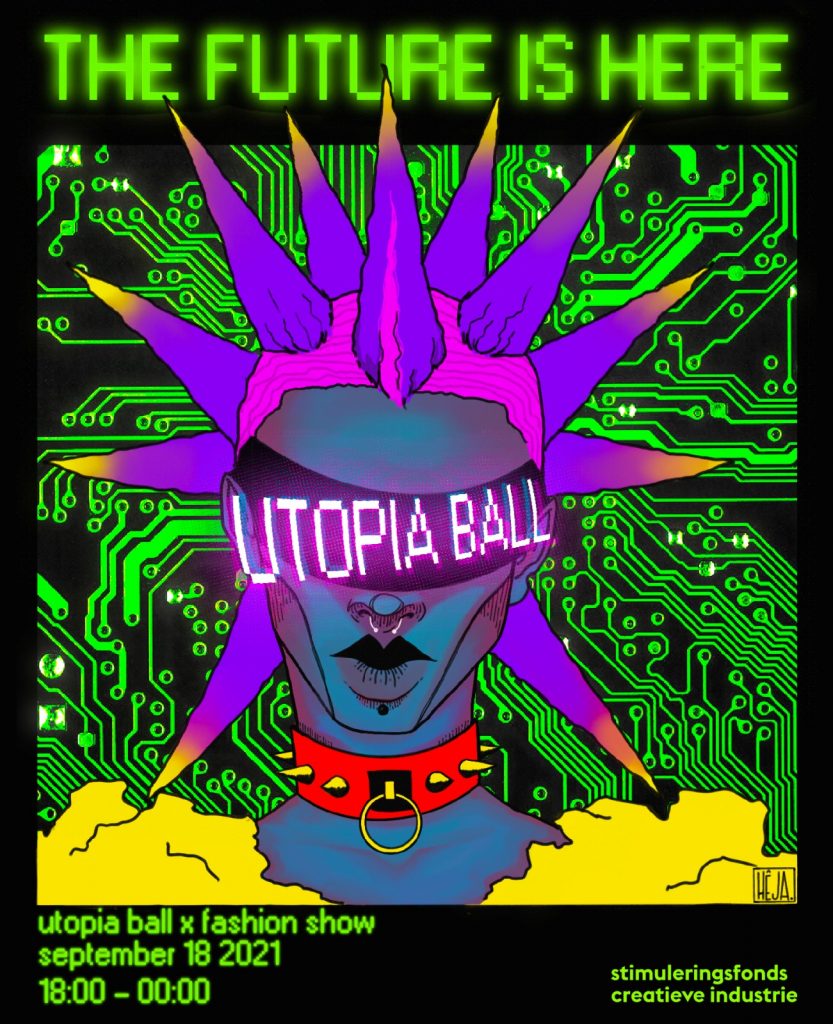 Welcome To Tomorrow! The year is 2100. Mankind is finally winning its battles with climate change, social injustice, war, hunger and poverty. We live in sustainable societies. We are closer than ever to rooting out misogyny, transphobia, racism, ableism and classism. We have cured cancer and eliminated HIV. Join us as we take you through all the progress we’ve made in the last 80 years. Welcome to Tomorrow! Welcome to Utopia!

The Utopia Ball III x Fashion show will be a voguing competition.

Future technologies allow us to enhance our faces, like real life instagram filters! Bring it in an effect that highlights your best facial features as well as your personality!

Virtual reality technology allows us to live out your wildest sexual fantasies.

What’s your future of sex fantasy? Is it alien sex? Bondage with flowers? The possibilities are endless!!! Bring it as an embodiment of your most outlandish sexual fantasy.

Set your phasers to STUN! Every generation has imagined the future. Tonight you’ll take your inspiration from the Sci-Fi aesthetics of the 60s and 70s (Logan’s Run, Barbarella, the original Star Trek, etc). And don’t forget your laser-gun.

The future fashion industry has put an end to “fast fashion”. Instead, the hottest trend in the new century is “up-cycling”. Take your old clothes and repurpose them into something new and fashion forward.

– VIRGINS: We want to see a clash of patterns. The uglier the better!

– OTA AMERICAN: Bring it in a deconstructed look.

– FF EUROPEAN: Use elements of paper & plastic in your effect.

Because nobody walked this category at last year’s New Paradise Ball, we decided to be eco-friendly and re-use it. Please use all recycled materials for this effect: JUNK!

Collect all your garbage and make a bizarre effect inspired by the harrowing truth that is GARBAGE ISLAND. What is Garbage Island, you ask? An island in the ocean made from collected plastic and ocean waste. Who lives on garbage island? These are the questions you need to ask yourself when you make this effect.

You have been selected to be part of an expedition to a new planet. It’s your job to make sure that the entire crew makes it there safely. Bring it in a jumpsuit/overalls and show us your tools of the trade.

In the new century, beauty pageants no longer exist. Instead, the titles of Mr. and Miss Earth are given to those who have contributed to the progress of mankind. Mr. and Ms. Earth are selected to represent the entire planet as ambassadors to the rest of the galaxy. Give us a presentation (visual, oral, or both) on your latest project to better mankind.

This category is for schoolboys as well as recent graduates who are already climbing the corporate ladder, but haven’t yet reached executive level. You are a tech genius working for one of the world’s leading start-ups. You have recently developed a new technology that you think will take the world by storm.

Due to decades of peaceful cultural intermixing, a majority of the earth’s population speaks more than one language. For your 10s, part of your chant needs to be in another language (or dialect, creole, etc). It can be as much or as little as you want, as long as it’s clear.

Interacting with technology has drastically changed in the last 100 years. Pushing buttons or tapping screens are a thing of the past. Instead, technology intuitively reads our hand gestures, making for an easier user experience. Bring it in an outfit and special gloves inspired by the movie Minority Report (2002). Lights are OPTIONAL, but appreciated.

In the year 2100, cybernetic enhancements in humans are common. Bring it in a cybergoth inspired effect with one or both arms “enhanced” and show us your superhuman moves.

New developments in artificial intelligence have allowed us to design state-of-the-art androids. Bring it as a high fashion android and show us your most glamorous robotic poses.

Here in the future, even Video Games are a completely immersive experience. Bring it as your favourite video game character.

Because there is no more war in the year 2100, the militaries of the world have committed themselves to promoting peace and love. Bring it in a remixed military outfit designed for spreading love instead of war.

Contact with new alien races has brought a new set of challenges to humanity, and it’s your job to help protect humanity from them. Bring it like a character from the Fifth Element and use your superhuman stretch to keep humanity safe.

Despite all the progress we’ve made, some parts of the world are still mired by the effects of climate change, late-stage capitalism and right-wing nationalist politics. Some people still live in these vast wastelands. Tonight, you are one of them!

Bring it in an effect inspired by Mad Max: Fury Road

Though there is almost no more war, countries still employ elite squads of super-spies to help “maintain” the still fragile peace in the world. Bring it in an effect inspired by the cuntiest spy of them all: Æon Flux.

🌍 MF REALNESS WITH A TWIST

It turns out that some of your ship’s crew are actually impostors! They’ve been hiding in plain sight using their shape-shifting abilities. For this category, you must get your tens in MF Realness. For the twist you can finally reveal your true form and come back as a cunty alien ready to KILL.

You know the vibesssss… Come as you want!