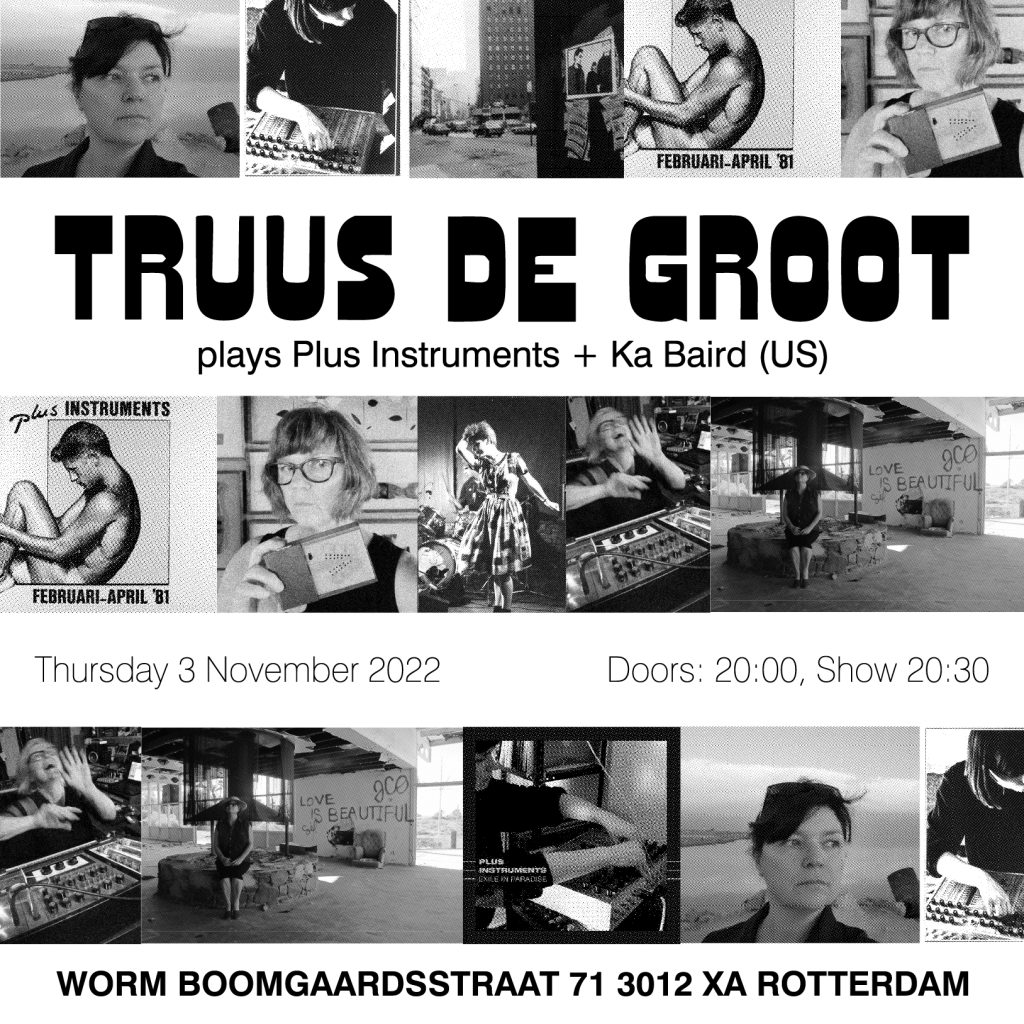 Truus de Groot -Eindhoven – NewYork – Rotterdam
Truus de Groot, founder of the great Eindhoven Ultra act, Plus Instruments, left for New York in January 1981, alone. "I didn’t really go with the intention to continue Plus Instruments there, it just happened. Lee Ranaldo lived with David Lindon and he got curious at the sounds we were making and joined. […] The Plus Instruments concept of more minimal beat driven came to be in NYC with David & Lee. We made the album in NYC between February and April (as the title says). Then we went back to Eindhoven. The Kremlin label had just started, and the rest is history."

On this night De Groot will perform a set of original material from the classic 1980s releases, Februari-April ’81, and Exile in Paradise, with a live drummer and surprise guests. She will use the original analogue backing tracks, dug out of her archive. The M.O. of Plus Instruments in the 80s was to play along with these analogue synthesizer, ambient noise or "pots and pans" backing tracks.

This performance is an exciting sequel to the opening of a photo exhibition and booklaunch, “GRIT, Truus de Groot in New York City” at WORM’s S/ash Gallery which opens earlier on the day, at 18:00. The exhibition has images and ephemera from the early 1980s, such as a huge audio archive on cassettes and reel to reel. WORM celebrates the work of Truus de Groot – one of the Netherlands’ true sonic "glocal" pioneers – throughout November with a series of events including a residency and film night alongside the expo and gig. “GRIT, Truus de Groot in New York City” is published by SAGO Press.

Ka Baird
Ka Baird is a performer, composer, and sound designer based in New York City. They are known for their live solo performances which include extended vocal, breath and microphone techniques combined with electronics and psychoacoustic interplay of flutes and other woodwinds. They create a present tense sound with a vigorous delivery that seeks extreme release through physical exertion and psychic extension that "dances in the undefined margins of experimental sound, performance art, and humor."