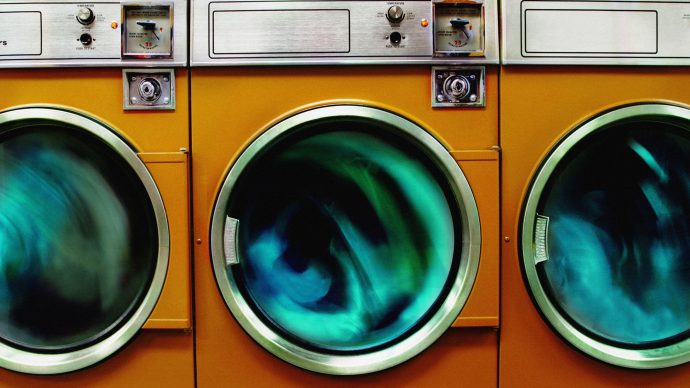 RE#SISTER invites you to tumble into WORM on July 23 to have your ears flushed! Honouring once again the late great Daphne Oram who made the soundtrack for a commercial by English Electric in the 1960s, promoting the Tumblewash machine.

WORM respects all safety regulations regarding COVID-19. That’ s why we can only have 30 people, seated, at this event. We have a host who will explain to you all the ins and outs. But if you want to come, make sure to make a RESERVATION!

Coming on stage for a live audience:

with Yara Said, a visual artist as well as a sound practitioner and noise explorer, who likes “dropping beats and posting sets while painting my nails ; ) ” Visual environments will be created by Chica Garcia, who uses 3D softwares to reflect on new technologies, social media and sexuality.

Blood of a Pomegranate

Premiere of a composition built on extracts from found texts related to the mediated distortion of female voices from mythological ancient narratives to radio transmissions of today.
The name Drousa is a collective name and in Greek means a female person that acts. For this piece, the person taking action was Angeliki Diakrousi, media artist and researcher.

… all loosely or closely connected to RE#SISTER, that bunch of soundfreaks messing around in WORM’s electronic studio!

Vanina Tsvetkova is a visual artist who in 2019 conceived a project called “We, Ourselves and Us”. An open collective where the players remain anonymous but interact in the moment, through senses, sound, and movement. She calls it a contemporary embodiment of the Kukeri ritual, a custom known in Bulgaria where extravagantly costumed people scare away evil spirits. Apart from self-made extraordinary headpieces, WoU play DIY instruments, like recycled radio circuits turned into crackle boxes, DIY effects and even rubber ducks..

Lucija Gregov is a cellist, improviser and artist who creates and explores new sonic landscapes using cello, analogue synthesizers and processed field recordings. Following indicators of flow, experimentation, investigation of unexplored physical and spiritual spaces, she enables emergence of practice and sound materials that are open-ended and continuously transformative.

Suzana Lașcu sings her way into a moment, but enjoys organizing noise via external sources as well. Brought up as an improviser, her work is gradually being woven across different genres, from jazz to [the] experimental, in the realm of acoustic and electronic music alike. She joined RE#SISTER in 2019, finding sonic relief and a community of like-minded explorers.

​Blood of a Pomegranate uses sound and performance to depict themes of real life horror, genocide, geopolitical disputes, nationalist mythology, and the dissonance of living as an internationalist social-anarchist within an imperial core nation. The result is a sound that juxtaposes sub bass drones, harsh digital noise, sung or screamed vocals expressed through the Armenian language, traditional Armenian liturgical chanting and ethnic folk music.
Blood of a Pomegranate is an attempt at communicating the sound of the space between us.