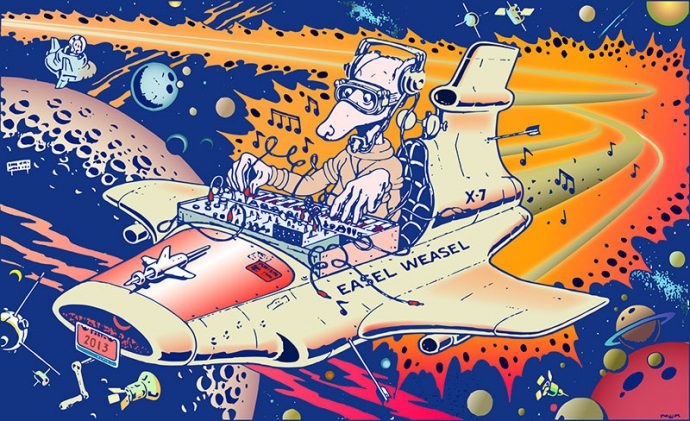 Image: The Buchla Music Easel Weasel, from “Programming and Meta-Programming in the Electro Organism: An Operating Directive for the Music Easel” by Allen Strange, 1973).

To paraphrase William Rankin, “Radio been understood using a wide variety of material metaphors—just in navigation and surveying, radio has been treated as a railroad, a yardstick, a street sign, a grid, even a kind of paint—but it can also be just as permanent, obdurate, and determinant as other, more familiar infrastructures.”

Volante, which may be translated as “flying”, or “steering wheel”, is the culmination of the diverse strands that BRUD and Aditya Mandayam have attempted to weave together in Radio JUJU: the human body as synthesiser; the collective voice; queer synthesis, and psychonautics.

Many JUJUs responded with enthusiasm in approaching the cassette as a creative tool, and using quadraphony and ambisonics as a compositional system. Volante will showcase some of these tape co-productions, with the queer_feminist collectives Tender Center; Justyna Banaszczyk (FOQL) of ORAMICS; BARE-TT, and of course, WORM.

Michal Libera
Michał Libera is a sociologist working in sound and music since 2003, most recently as a dramatist and librettist in sound essays and other experimental forms of radio art and opera. Libera also runs the conceptual pop label Populista dedicated to mis- and over- interpretations of music.

BARE-TT (Katia Barrett & Melissa Tun Tun)
Bare-TT are Katia Barrett and Mélissa Tun Tun. They are a duo that exists at the intersection of computer music and live electronics. Using warped field recordings with altered voices, DJ player loops, and phase distortion synthesis they create soundscapes that oscillate between micro and macro environments.

Humildad Sound Sistema (Juan-Pablo Villegas)
Juan-Pablo Villegas sees filmmaking as a way to bring together his interest in images & sound. The starting point is the body’s perception of external stimuli & how that influences our personal & collective experience. The tools he uses derives from audiovisual principles that allow reflection by changing the way they are conventionally used.

Lukas Simonis
Lukas Simonis is a musical activist who has his roots in the industrial music and noise rock of the 1980s. He dived headfirst into the improv-world of the Rotterdam Jazzbunker scene, which boasted ‘heavy drug induced’ punk rockers, freejazzers and early electronic musicians and pre-postrock. Nowadays he is co-organiser of WORM Sound Studios.

Wojtek Szustak
Wojtek Szustak is an intermedia artist and musician from Poland, intermittently active in Kraków’s electronic and DIY scene and currently residing in Rotterdam. Szustak works at WORM Sound Studios, where his practice is, in the main, focused on audio, technology and interferences. 2019 saw Szustak launch a new cooperative project at Varia, making a series of instrument-making workshops using only recycled electronic waste.

FOQL (Justyna Banaszczyk of ORAMICS)
Justyna Banaszczyk aka FOQL has released on different types of media and on labels such as New York Haunted, Always Human Tapes, Gooiland Elektro and Pointless Geometry. Her hypnotic and unconventional style stems from her industrial and dark roots, and her soft spot for experiments, heaviness and innovative dance music.

DE PLAYER
DE PLAYER is a platform in Rotterdam that caters for the cutting edge of performance art, experimental music and the visual arts. The emphasis often revolves round the importance of sound, and the performance and positioning of sound within the visual arts and contemporary experimental music. Theory, design, lifestyle and staging play key roles. DE PLAYER promotes interdisciplinary highlights mutual inspirations and influences.

Tender Center
Tender Center is “a collective of feminist queers who are building the beginnings of a community center for culture; or a venue for queer events; or a les university of life in Rotterdam. Tender Center is a relational infrastructure *and venue* with parties, agitation, co-learning, bodies in varying states, gardening, (s)words, conversation, workshops, food, diy darkroom, cats, curry, and a solid sound system.”

BRUD
The Goal of Brud is to Replace Brud with Better Brud.