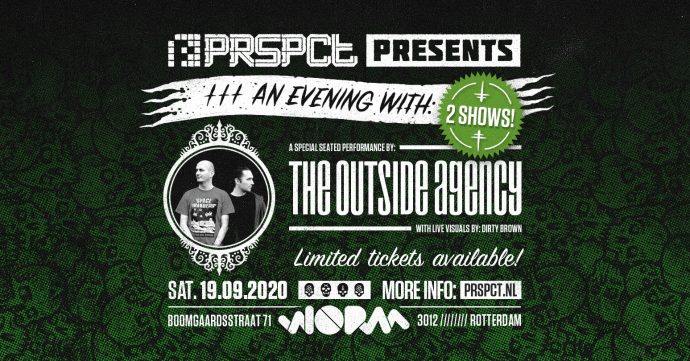 PRSPCT evening with: The Outside Agency – Show 1

The Outside Agency is a style unto itself. Delivering a perfect blend of dark and industrial elements at almost every conceivable speed, the duo’s DJ sets are often a mirror image of their work as producers.

Dissidents within the hardcore scene, The Outside Agency (DJ Hidden & Eye-D) have always had their own unique sound. The motivation “to be different yet effective” was evident on their first releases, on Mokum, in the late 90s. When hardcore suffered a drastic change in direction not long after, they started focusing their attention on drum & bass. Some years later, when hardcore had transformed yet again, they quickly started producing and playing hardcore again with renewed vigour.

After a string of successful releases on several international underground labels (such as Black Monolith Records and Otaku Records) they started up their own label, Genosha Recordings; one of the most influential labels in underground hardcore. Their forays into drum & bass, their production techniques and ideas and their DJ-sets increasingly started to overlap. This continued crossbreeding between drum & bass and hardcore ultimately led to the start of a sister label to Genosha: One Seven Five. The label has hosted some of the biggest names in hard drum & bass and became one of the most respected labels of its kind, almost overnight.