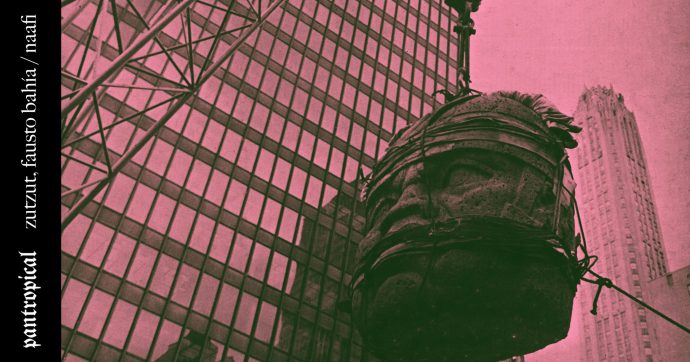 Pantropical is turning its attention to NAAFI again for what is set to be a sizzling club night. Proudly representing the Mexico City-based collective this time are Zutzut and Fausto Bahía. The NAAFI squad celebrates club subculture in unconventional ways. They are a nightclub, record label and promoter, all-in-one; a community that assembles some of the most interesting artists from different regions of Mexico, Latin America and beyond. A lucid exploration of peripheral rhythms and bass without borders.

Zutzut (MX)
Zutzut aka Alejandro Núñez from Monterrey, Nuevo León is one of the most talented and celebrated producers/DJs in the global scene. His layered tracks flawlessly blend Latin American and Caribbean rhythms like Dembow and Baile Funk with Angolan Kuduro and the functionality of European club sounds; reflecting the constantly unfolding dialogues between various music cultures. Tiny Mix Tapes described Zutzut’s “El Pack Vol. 1” EP as an “exploration in identity, craft, and genre cross-pollination”.
https://soundcloud.com/zutzut

Fausto Bahía (MX)
Tomás Davó from Puerto Escondido, Oaxaca is one of the founding members of NAAFI alongside Lauro Robles (Lao), Mexican Jihad, and Paul Marmota. Tomás runs the record label side of things and connects the dots. As Fausto Bahía he embraces the risk-taking course he and his troops committed themselves to; deejaying peripheral rhythms around the globe.
https://soundcloud.com/naafi/fausto-bahia-cdmx-tapes-x-nts

Sxmbra (CO/NL)
Sxmbra navigates global online undergrounds to bring different sounds and movements together. His emotional rollercoaster DJ style nods to the wastelands of modern culture, always with a hint to his Colombian roots.
https://soundcloud.com/ojos-negros

Pantitlán (MX/NL)
Pantitlán is the Amsterdam-based collective that organises cultural events reflecting Mexican culture; an urban melting pot of expressions and impressions. In the Nahuatl native tongue, Pantitlán means “between two flags”; flags that were used to warn people in canoes of dangerous whirlpools. Between these flags the crew brings the water, the mezcal, the pre-hispanic drink of the gods.
http://www.grancolectivopantitlan.com