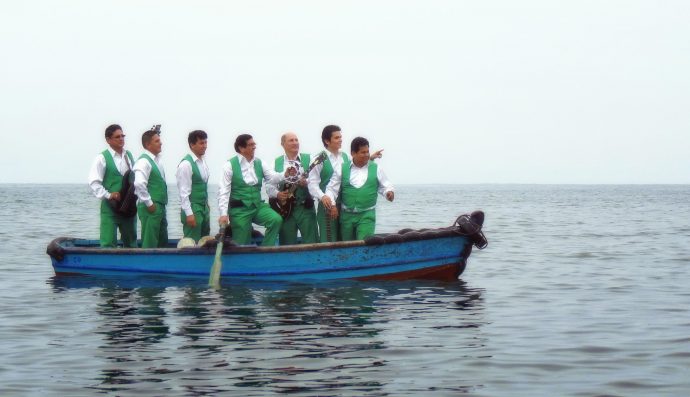 Pantropical and WORM’s Avantgardistic State are extremely proud to present the legendary Los Mirlos during their first ever European tour! Widely known as the masterminds of Peruvian-Amazonian Cumbia, Los Mirlos have recorded over 500 songs during their career. If you haven’t been living under a rock, chances are you have heard at least one of their songs by now, one way or another. Don’t miss this rare opportunity to witness this fantastic 8-piece live band led by founder Jorge Rodríguez Grández.

Los Mirlos (PE) – start Los Mirlos: 21:15
Named after a black bird in their native jungles, Los Mirlos are the uncrowned kings of tropical Peruvian Cumbia, or Cumbia Amazonica. The band came together in Lima during the oil boom of the ’70s and created a uniquely new and powerful party music inspired by the Anglophone psychedelic rock and surf music of the time. Fast-forward some 40 years and Los Mirlos have travelled and performed in almost every Latin American country, and are still considered essential for the culture of Amazonian Cumbia. Not least because of popular compilations such as “Roots of Chicha”, “Back To Peru”, and “Cumbia Beat Vol. 1”. Songs like ‘La Danza de Los Mirlos’, ‘Sonido Amazónico’, ‘Lamento en la Selva’, ‘Muchachita del Oriente’, and ‘Chinito en Onda’ are kept in the memory of many people, worldwide.

DJ Sebcat (BE)
This great selector from Bruxelles mixes the best diasporic sounds from the global underground. Seb is the motor behind many great party and concert nights in wellknown BXL clubs (like Recyclart, and Bonnefooi), and the Rebel Up Nightshop radioshows. He released the ‘Rajasthan Street Music’ compilation through Sublime Frequencies in 2014. Tonight he will show that he’s also an expert in the field of Cumbia, Chicha, and Andean folklore.
DJ Pinchado (AR)
Pinchado is a specialist excavator of the finest Cumbia and other tropical gems from the vaults of half-molten record jungles across Latin America. He edits these into fun lo-fi mixes, or leaves them lovingly intact on 7″, to be played in clubs around the globe. Pinchado released records of NL’s own Dick El Demasiado, and the flamboyant Peruvian singer / hairdresser, La Tigresa del Oriente.