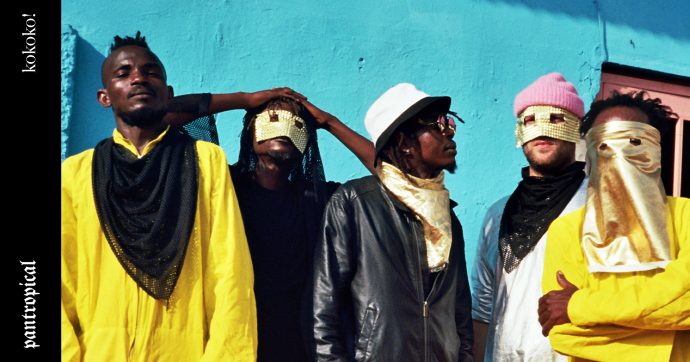 The soundtrack of Kinshasa’s tomorrow
20:30
WORM

Pantropical proudly presents KOKOKO! from Kinshasa, Congo; a creative collision of different artists. The group centre around the twin axes of musical instrument inventors from the Ngwaka neighbourhood, electronic producer Débruit, and Makara Bianko and his dancers, who hail from the Lingwala neighbourhood.

KOKOKO! (Democratic Republic of the Congo)
Winds of change are sweeping over the cultural landscape of Kinshasa. There is a thriving alternative scene that can’t just be defined, or looked at with western eyes as “African music”, and of course even less as “world music”. Its explosive and vibrant sounds emanate from the ghetto and downtown clubs, between government-imposed power cuts. The artists bring something new to life; strong new ideas with DIY-constructed instruments that have a powerful, often unique drive. KOKOKO! was born from that scene and represents a change in mentality, a radicalisation of the people. With the constant degradation of the quality of their everyday lives, Kinshasa’s youth have begun to question the taboo subject of ‘respect for one’s elders’; denouncing a society paralysed by fear. This spirit of protest is something entirely new, and KOKOKO! is the soundtrack of Kinshasa’s tomorrow.
https://www.kokokomusic.com | https://kokokomusic.bandcamp.com

NADIA RODRIGUES (Roffa)
Nadia has been a key player in the Rotterdam Afro scene for seven years. In her mixes, she switches effortlessly between Afrohouse, Gqom, Kuduro, and the sounds related to her Cape Verdean roots such as Funaná.

DJ BONI (Roffa)
Boni is a Rotterdam-based DJ with Angolan roots. Like Nadia, he is a prime mover, and shared stages at previous Pantropical editions with Nigga Fox, Bitori, Maboku, Nazar and others. He is known for his quality Afrohouse and Kizomba sets but also takes different routes with (vintage) Rumba Soukous and other styles.
https://soundcloud.com/pantropical/pantropical-dj-boni