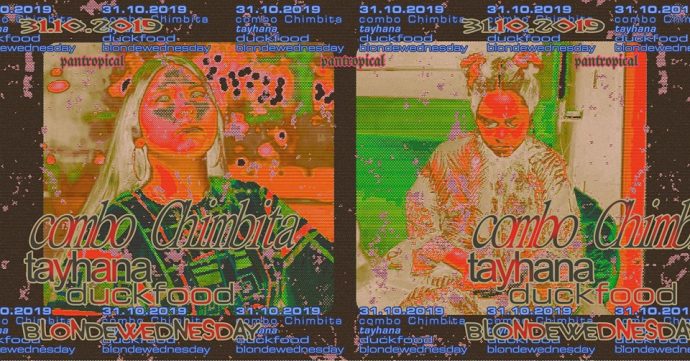 Pantropical proudly presents Combo Chimbita’s exclusive NL show during their first European tour. The New York-based Colombian band transforms Afro-Latin rhythms into melodic witchcraft, stripping away wordly façades into something bare and beautiful, like time travel through the lush tropics of yore. This is the stuff of goosebumps that you can also dance to. We’re also delighted to have DJ / producer Tayhana, who established herself as one of the most powerful musical forces on the South and Central American dancefloors.

COMBO CHIMBITA (US/CO | Anti-, Names you can trust)
Visionary quartet Combo Chimbita combine folkloric mystique, otherworldly psychedelia and a dash of punk attitude. Their latest release ‘Ahomale’ captures all that is essential about them: through Carolina Oliveros’ mesmeric singing the powerhouse drumming, hypnotic synths and expressive guitar and bass playing, the band fuse the perennial rhythms of the Afro-Latin diaspora with a modern-day consciousness, while tracing the prophetic traditions of their ancestry. Oliveros: “Ahomale resurges from the visions that we’ve been having via our music and life, and the lyrics reflect a manifestation passed on through our ancestors and the gods”.
https://combochimbita.bandcamp.com

TAYHANA (AR | NAAFI, Hiedrah Club de Baile)
Based in Mexico City, Tayhana is a maverick DJ and producer from Argentina who has established herself in the global club scene with her whirlwind selection of Latin American and global beats. She has a fearless mixing style that comprises a variety of contemporary crossovers. In 2013, Tayhana co-founded Hiedrah Club de Baile; a party series that pushes the experimental edge of Buenos Aires’ underground. Tayhana also collaborated with the Salviatek label in Uruguay and NAAFI in Mexico.
https://soundcloud.com/tayhana

DUCKFOOD (Roffa | Pantropical, Rebel Up)
Duckfood’s awe-inspiring music collection absorbs anything from Renaissance, and African-diasporic styles to Moroccan trance. His DJ selections are extremely colourful and not preoccupied by categorization. Like always, with Duckfood the pieces of the puzzle will fall into place.
https://soundcloud.com/duckfood

BLONDEWEDNESDAY (PT / Roffa)
Blondewednesday wanders around in Roffa’s club microcosm in support of events, artists and initiatives. She is the founder of the Voyager collective, studies sonology at the Royal Conservatory and, more importantly also has a penchant for pantropicalisms. She will be closing the night.