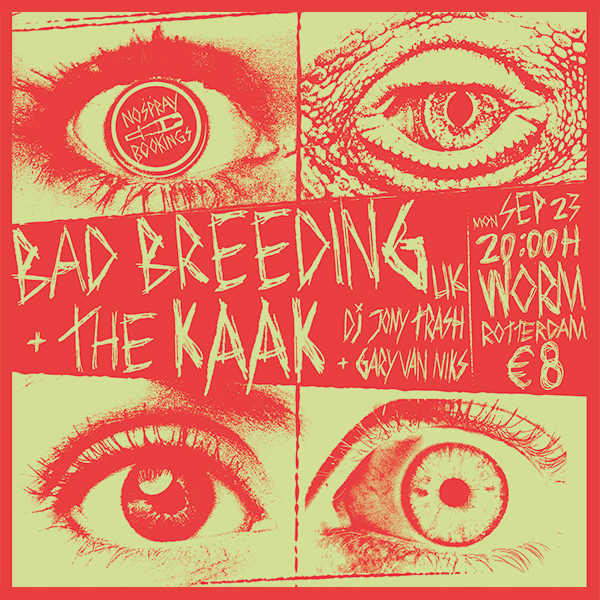 Nospray is the new sound in the Rotterdam underground, a collective of four individuals who rummage the darkest corners of the world for the coolest bands, and get them to play in Rotterdam. Nospray champions contemporary punk, post-punk, garage and new wave music and other sounds in the same spirit.

Bad Breeding (UK)
Anarcho-punk/-hardcore band Bad Breeding is an outburst of rage against UK’s divided society. This Stevenage-based outfit are a fist of fury towards the capitalistic devastation that’s ripping away dignity and opportunities from the common Brit. The band’s name shouldn’t sound new; they played at the Left Of The Dial kick-off, Motel Mozaique, Incubate and Lowlands amongst others. Their new album “Exile” is even more killing live!
FFO: Rudimentary Peni, Crass, Sonic Youth

The Kaak (NL)
Some of them may not be of legal drinking age, but don’t think they’re soft. These three kids play punk rock and they play it mean. Their sound is reminiscent of early British punk and feels just like the first Dutch reaction to that British wave of bands. The first EP rips like any tune compiled on the Killed By Death series. Finger lickin’ punk rock from Haarlem.
FFO: Buzzcocks, Mollesters, Helmettes