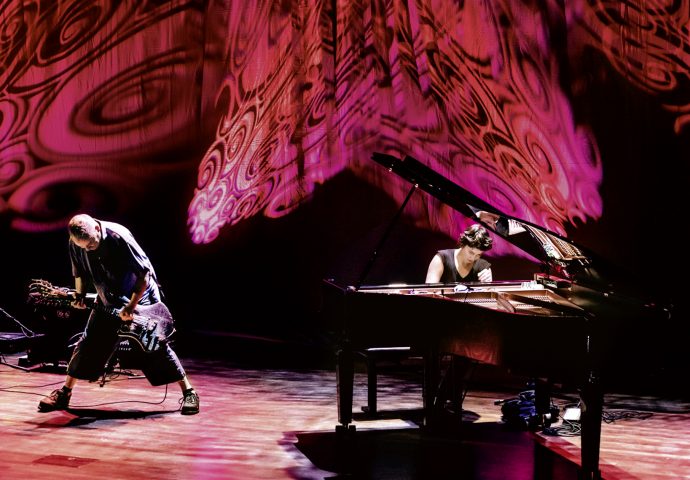 Although this combination of musicians hardly makes sense, Kaja Draksler and Terrie Ex are experienced improvisers.

Pianist Kaja Draksler is a key member of the Amsterdam modern classical and improv scenes. With her own octet, or musicians like Susana Santos Silva and Onno Govaert, she combines the (free) jazz tradition with elements from (contemporary) classical music and folk.

By contrast Terrie “Ex” Hessels is still an unpredictable force of nature, with an angular and frenetic body language to match his musical personality. Armed with a battered, 40 year-old Guild S-300 and some tools (a drum stick, knife, some gaffer tape and basically anything else within reach), Hessels can be seen as a one-man musical army.

Together the pair explore a raf of sonic possibilities, with instruments as sound generators. Is it beautiful? Can you hum along? Probably not, but listen carefully and you might hear the sound of liberation.

Ich.Bin.Bob
Ich.Bin.Bob is the alter ego of Simone Padovan from Bologna (Italy), an electronic musician and music producer interested in the more esoteric elements of composition. Padovan will be working on a new LP during a residency at WORM Sound Studios. His new LP Cronòtopo is out in the course of February 2020.