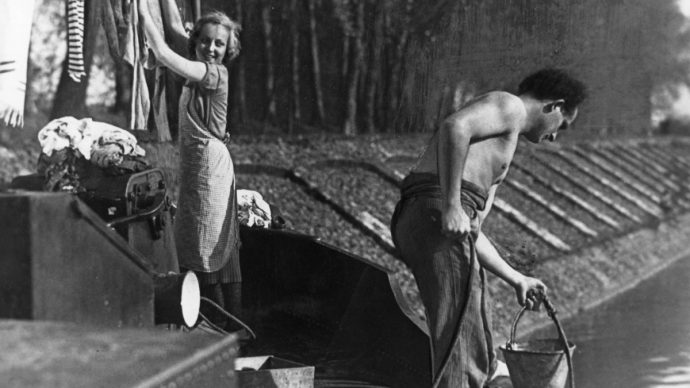 The Open City likes to play with ideas round boundaries and restrictions, whether cultural, physical or mental. We are delighted therefore to announce a new programme; Cinema Architecture 2018: Itinerant Movies.

The selected films are entirely shot along waterways all over the world. These navigations aim to connect distant moments, sites and places suggesting a cinematic voyage to the film spectator that moves along an imaginary path.

Sailing along the Maas river by boat, moving across New York in a limousine or flying over the Robert Smithsons Spiral Jetty in a helicopter channels the perception of the landscape in a linear way: what is left behind is the known territory, what lies ahead is the unknown. Through this process the space is revealed to the spectator gradually, building up their own memories, associations, expectations, creating their own mental map on the way.

Deconstructing and reconstructing the architectural space depicted in the film engages the spectator in an active process of discovery.

Juliette, coming from French countryside, marries Jean, the captain of the shipping canal barge Atalante. She decides to embark in a journey with the her new husband, accompanied by the first mate and the cabin boy. The barge becomes Juliette’s new home. Her previous, sedentary existence is shifted diametrically; she is now expected to live without roots. What she anticipated to be a journey towards the discovery of new worlds becomes a whirlpool of harsh emotions as she experiences the pungent daily life of sailors. Jean Vigo poetically describes the two lovers’ struggles and reveries, each characters fears and fragilities gradually emerge as the barge goes by its course.